Reanimation package of reforms > News > Columns > Why is our criminal law so imperfect? 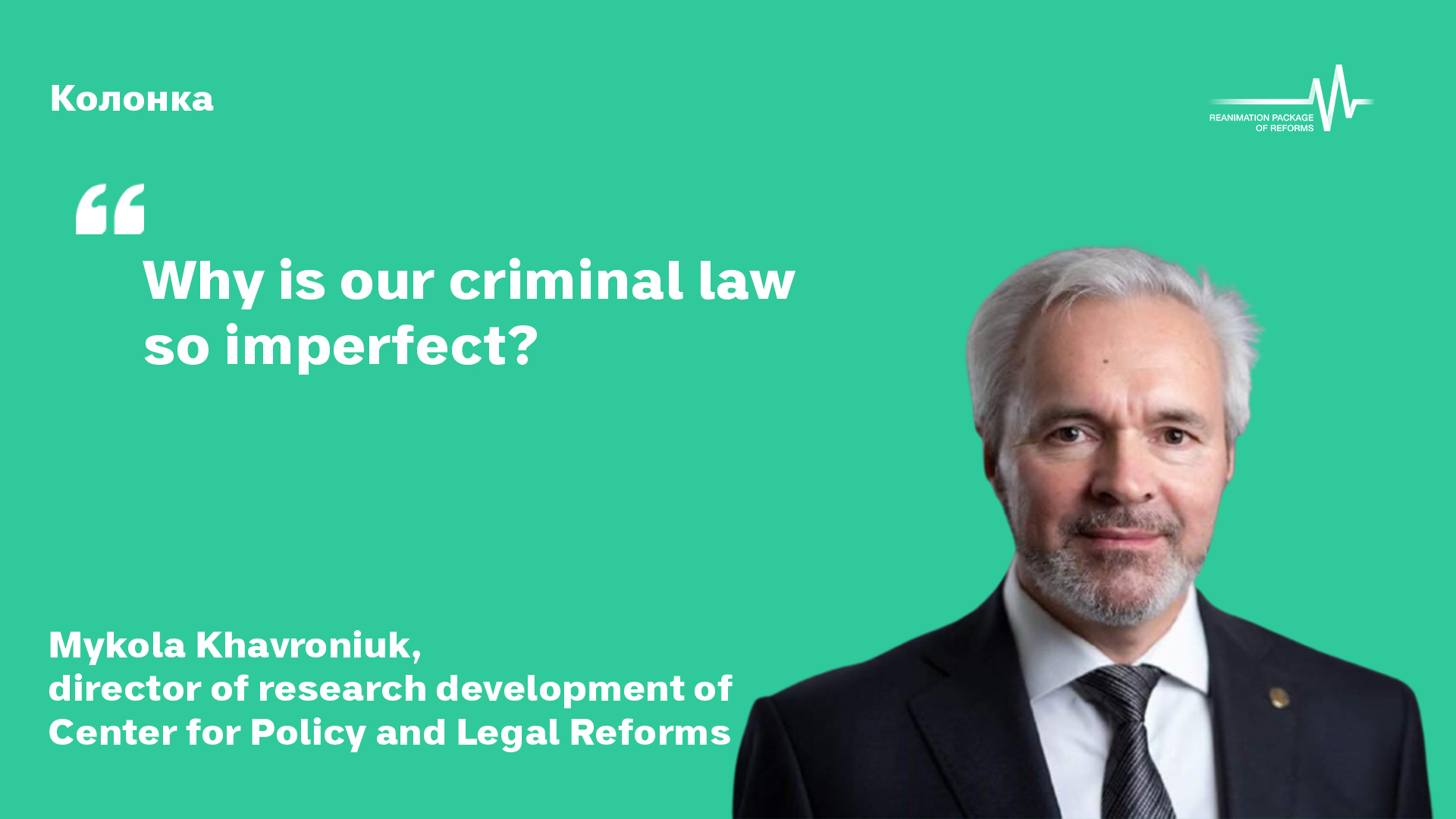 Why is our criminal law so imperfect?

Imagine that Parliament, in its laws, establishes that the Earth is square, the sound is faster than light, blood groups do not matter when transfused, and monopolized systems are the key to progress. To the educated population of any modern country, such laws should seem, to put it mildly, unfounded and inappropriate.

But despite the very high educational level of the population of Ukraine, the Parliament is practically indifferent to the fact that the legislator without conducting proper, and often – any scientific research determines for what actions citizens can be prosecuted and what restrictions such liability imposes on them. Citizens in the 21st century live by the principle of “you will not escape from prison,” which was set in the years of yore, and treat the Criminal Code as if everyone has seven lives and the first can be lived in black.

Meanwhile, the mockery of law and jurisprudence continues.

Only during 2020-2021, the following actions were recognized as a crime:

Other laws that were passed during this period increased penalties for illegal possession of a vehicle, damage to a telecommunications network, certain sexual offenses, crimes against the environment, and so on. There is no scientific study that proves the need for such changes to the Criminal Code, as there are no hundreds of other similar changes.

What are the shortcomings of the Criminal Code?

Ukrainian specialists in criminal law, criminology and criminal executive law should admit to themselves that the 2001 Criminal Code was also very partly based on the results described in dissertations, monographs, and scientific articles. There is no other way to explain that this Code:

This very incomplete list of shortcomings of the current Criminal Code could be continued by devoting more than one book to them. However, something else is more important:  how to prevent the provisions of the Criminal Code from being further developed carelessly and haphazardly and not applied arbitrarily.

Scientific expertise: how does it work according to the law?

The Law “On Scientific and Scientific-Technical Activity” (Article 1) stipulates that the result of applied scientific research is new knowledge designed to create new or improve existing methods, systems, technologies, specific proposals for current social tasks, and its form may be not only a monograph, article or scientific discovery, but also a draft legal act, if its preparation requires scientific research or contains a scientific component.

Unfortunately, in contrast, the legislation that determines the procedure for drafting laws, in particular the Criminal Code, virtually excludes legal scholars from this process. Thus, the Rules of Procedure of the Verkhovna Rada of Ukraine establish the following rules:

The legislator’s disregard for the results of applied research in the field of criminal law and criminology, which prove or disprove the need to amend the Criminal Code, devalues ​​these results. In fact, it undermines the credibility of legal science in general.

In view of the above, the position of NALSU, NASU, and its subdivision – the V.M. Koretsky Institute of State and Law, the leading institution of higher education of legal profile, which in dozens of cases of ill-considered changes to the Criminal Code have never responded with an official statement, appeals to the Verkhovna Rada and the President, international organizations and more. In the competition between the principledness of the scientist and tolerance for power, the latter won in all these cases. That should not be the case.

It is in the common interest of all citizens to ensure the high quality of the law on criminal liability. It must, on a scientific basis, determine, firstly, a relatively short (based on the principle of ultima ratio) and exhaustive list of human behavior to which the state must respond with a sharp edge of the Criminal Code and, secondly, the state’s response to this behavior – a list of criminal -legal means that must take into account both its typical types and specific features and identity of the perpetrator.

What needs to be done first of all to ensure the high quality of criminal liability law?

General requirements for criminal statistics should be developed and adopted, which should be enshrined both at the level of an international treaty and in national law. Different crime accounting systems must complement each other. Not only the absolute level and rate of crime, its structure and dynamics should be taken into account, but also criminal records, latency, victimization, etc. should be indexed.

The task of collecting and systematizing criminal statistics data should be entrusted to a state body independent of the Office of the Prosecutor General, pre-trial investigation bodies and the judiciary.

Official statistics – at any degree of their perfection – must be supplemented by data from victimological surveys. Their essence is an anonymous representative finding out of data on how often people had to be victims of crimes (and which ones – violent, sexual, corruption, etc.) during a certain year and in a certain area.

In addition, it is necessary to put into practice the method of self-report (Self-Report Survey) – whether the respondent himself committed any crimes, if so, which, where, when, in what way. Of course, such a survey is not suitable for gathering information on murder and rape, but it is perfectly acceptable to gather information on bribery, drugs or weapons, etc., i.e. information which in itself is grounds for acquitting the respondent. .

Such questionnaires and surveys should be conducted by analytical centers and research institutions in the field of criminology in cooperation with public authorities and local governments.

The criminological examination must be conducted in respect of all laws amending the Criminal Code. It would be appropriate to set up a permanent commission of criminologists, representatives of public authorities, as well as think tanks and international organizations at NALSU, the members of which, changing on a rotating basis, conducted such expertise on a contractual basis, determining compliance of each draft law to international treaties and Constitution of Ukraine, consent to be given by the Verkhovna Rada, its compliance with the Criminal Procedure Code, Criminal Enforcement Codes, other laws, its compliance with research results, and provided a scientifically sound forecast of the law.

A similar institution in terms of its role and composition was established in 2020 – the Commission for the Implementation of Decisions of the European Court of Human Rights as an advisory body to the Cabinet of Ministers.

Changes to the Criminal Code must be comprehensive, and therefore can be made no more than once a calendar year (except in cases of the abolition of criminal liability for the act or improve the legal status of the person who committed the crime).

In order to avoid legislative chaos, the same article of the Criminal Code cannot be changed earlier than 12 months from the date of entry into force of the law on previous amendments to it.

The principles of the Criminal Code must have a real impact on both the legislator and the law enforcer. Only in this case, such principles as legality, legal certainty, equality before the Criminal Code, proportionality, individuality, humanism, uniqueness, and conscientious fulfillment of international obligations will be observed.

It is time to understand that criminal proceedings are not a purely legal sphere but a social one in general. It is subject to study primarily by psychologists, physicians, economists, sociologists, and even historians. If it is really important to take into account the identity of the defendant in the application of criminal law, then the introduction of positions of forensic psychologists to provide the court with appropriate recommendations should become the rule. Only the first stage of this activity was the introduction of pre-trial probation (Article 9 of the Law on Probation).

State anti-crime policy should be constantly monitored and evaluated. The monitoring information system created for this purpose should include, in particular: data on amendments to the Criminal Code and related laws, the purpose for which these changes were made, and data on the positive and negative results of the implementation of these changes; statistical data on the results of the criminal justice system; results of the implementation of relevant state strategies and implementation of programs; reports of the heads of pre-trial investigation bodies, the Prosecutor General, the Chairman of the Verkhovna Rada Committee on Law Enforcement on the effectiveness of state anti-crime policy.

Such monitoring and evaluation should be the responsibility of criminologists.

Mykola Khavroniuk, director of research development of Center for Policy and Legal Reforms