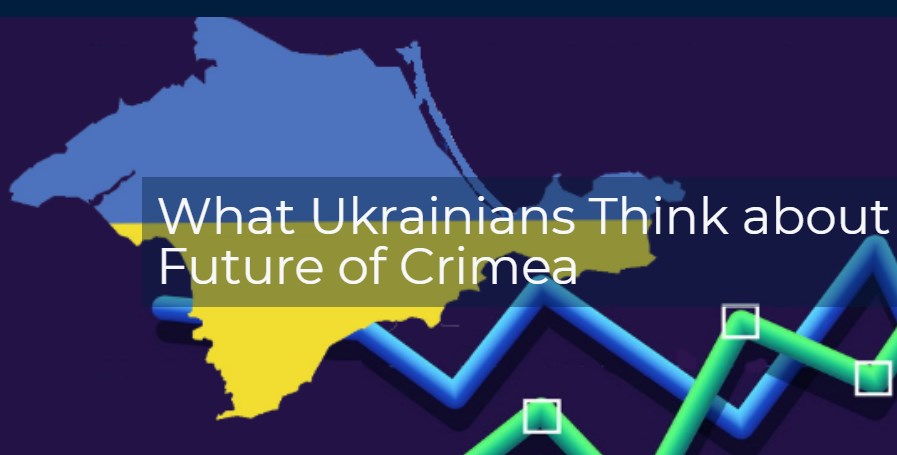 What Ukrainians Think about Future of Crimea Among respondents who believe that the return of Crimea to Ukraine is possible, the most effective way to achieve this is through diplomatic efforts aimed at toughening sanctions against Russia (47%) and by enacting reforms that will increase living standards in Ukraine and make a return more attractive to residents of Crimea (46%). Ukrainians are least likely to believe that negotiations with the Russian Federation (12%) or the complete isolation of occupied Crimea and cutting off of all contacts (13%) will be effective.

Respondents in all macroregions, except the south, think that the following measures are necessary for the return of Crimea: tougher international sanctions on Russia; enacting reforms and increasing living standards in Ukraine; strengthening Ukraine’s military and planning an operation to liberate Crimea. Respondents in the east are more likely to think that Ukraine needs to strengthen its military in order to return occupied Crimea as compared to those in central Ukraine: 30% in the east vs. 23% in the center. Compared to other regions, residents of the south are most likely to see normalization of relations with the Russian Federation as a way of resolving the issue of the occupation of Crimea (27%) In the opinion of the Ukrainians surveyed, the main factor that makes the return of Crimea to Ukraine impossible is the presence of Russian troops in Crimea (52%). Two other important factors identified by respondents were the negative attitude towards Ukraine among residents of the peninsula (39%) and the duration of the occupation of Crimea by the Russian Federation (35%). The greatest regional difference in opinion exists in the eastern macroregion; most of the people surveyed in eastern regions (50%) believe the return of Crimea to Ukraine is possible because residents of the peninsula have a negative attitude towards Ukraine. Support for Crimean Tatar autonomy is strongest in western (66%) and central (64%) regions, and weakest in southern (48%) and eastern (44%) regions. A nationwide survey was conducted by the Ilko Kucheriv Democratic Initiatives Foundation together with the Razumkov Center Sociological Service on July 29 – August 4, 2021. Face-to-face interviews were conducted with 2019 respondents aged 18 and over at their place of residence, in all regions of Ukraine, except for Crimea and temporarily occupied areas of the Donetsk and Luhansk regions. The sample is representative of key social and demographic parameters. The theoretical sampling error (without design effect) does not exceed 2.3% with a probability of 0.95.

The results of nationwide surveys conducted jointly by the Ilko Kucheriv Democratic Initiatives Foundation and the Razumkov Center Sociological Service on May 11-16, 2016 and August 16-22, 2018 are provided for comparison.