Reanimation package of reforms > News > What threats does bilingualism pose for Ukraine? 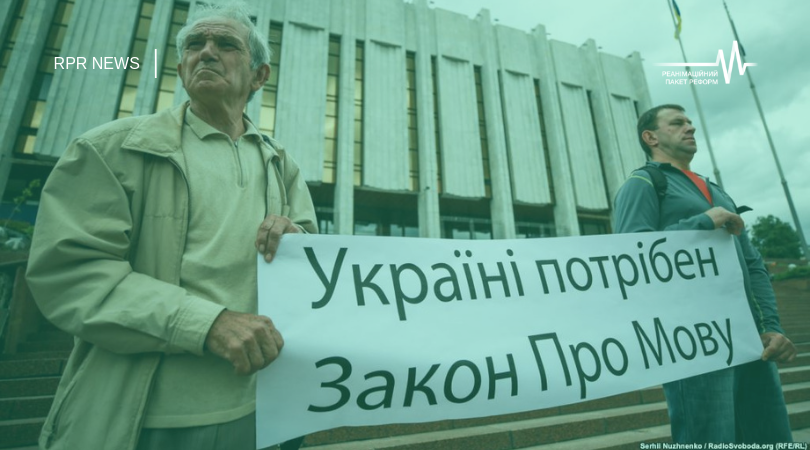 What threats does bilingualism pose for Ukraine?

The fact that a nation speaks its language directly reflects nation’s unity and development. In-depth recovery and development of the Ukrainian nation is a strategic goal of all conscious Ukrainians who are planning to live in Ukraine and raise their children here.

Adoption by the Verkhovna Rada of the law on language No. 5670d will give an impetus to the construction of a holistic system of support for, protection and further development of the Ukrainian language. At present, the draft law is being considered by the Parliament in the second reading, and its final adoption is an urgent duty of every MP elected by the Ukrainian people.

For a long time, the Russian Empire was doing everything to make Ukrainians believe they are small children and that Russia is their “elder brother”, as well as to develop inferiority complex as to their own language; and consequently, to push the Ukrainian language to secondary, marginal positions, so that it does not interfere with further Russian expansion.

“Behind the cliche of bilingualism, there is the desire of the Russian Federation to make Ukraine monolingual, namely Russian-speaking. Such a scenario was introduced in Belarus where there is formal bilingualism, or in the occupied trilingual Crimea in fact dominated by the Russian language,” says one of the authors of the draft law on Ukrainian language No. 5670-d Taras Shamaida.

The Constitution of Ukraine recognizes Ukrainian as the only official language, and also recognizes the languages of national minorities and indigenous peoples.

Experts believe that the direct legacy of the Russian Empire is the domination of the Russian language in spheres such as e-commerce and printed media. This is an implication of colonial policy, which is being implemented by the Russian Federation today.

Therefore, the most important task of language policy in Ukraine is to protect the Ukrainian language as the main factor in preserving national identity.

In 1989, the law of the USSR “On Languages in the Ukrainian SSR” was adopted. Back then, it was a step forward, because the law supported the language in certain spheres despite the fact that it did not overcome Russification in others.

How do independence and language affect the freedom of the nation?

Taras Shamaida, Coordinator of Volunteer Movement “Space of Freedom” tells us how he heard people saying that the Ukrainian language issue was not at the top of the agenda 30 years ago. In 1989, a wave of rallies demanding the adoption of the law of the Ukrainian USSR which would determine the status of the Ukrainian language swept Ukraine. The then ruling Communist Party argued that such a law was not at the top of the agenda repeating a set of standard statements which appeal to people with provincial and earthbound attitude.

They deliberately said nothing about the way the independence of the state and its official language affect freedom, and how this freedom is transformed into prosperity afterwards. Little is mentioned about this fact in 2019.

In 2012, under the presidency of Viktor Yanukovych, who subsequently fled from Ukraine, the Law of Ukraine “On the Principles of Official Language Policy”, aka the “Kivalov-Kolesnichenko’s Law”, was adopted with numerous violations and aimed at Russification of Ukrainians. It also abolished the Law of the USSR of 1989.

The “Kivalov-Kolesnichenko’s Law” consolidated functioning of regional languages – in some regions the Russian language acquired official status next to Ukrainian and de facto was used instead of Ukrainian.

We remember “Language Maidan” in 2012 when the public opposed this law. It was in force for as long as 6 years – until the Constitutional Court of Ukraine declared the law unconstitutional in early 2018.

What if the language law had been adopted much earlier?

The draft law No. 5670-d recognizes the language as an element of the constitutional system, state unity and national security. Every citizen is guaranteed the right to receive information, services in Ukrainian. The law will protect Ukrainian, at the same time it is not aimed against other languages.

The document consists of 57 articles, it envisages amendments to some 50 legislative acts and regulation of more than 30 different spheres of public life.

Patriotic-minded representatives of the public say: if the law on the language had been adopted at least in the late 90’s or early 2000’s, today Ukraine would be much stronger in counteracting the aggression of the Russian Federation. It might have saved both Crimea and Donbas.

But the law was not passed, and the Russian language managed to settle in the mentality of many people – and the consequences are already visible.

Taras Shamaida is sure: if Ukrainian language dominated in education, culture and media space of these regions, then Russian propaganda would have less effect on people’s consciousness.

Just have a look at the map of the occupied territories: these are the most Russified regions – Crimea and Donbas. The Russian military invasion was easier in the territories that had undergone total Russification.

What do studies say?

According to a survey conducted by the Kyiv International Institute of Sociology (KIIS), the Russian propaganda index for Russian-speaking Ukrainian citizens is 2.5 times higher than that for Ukrainian-speaking citizens.

According to one of the authors of the draft law, Serhii Osnach, connection between geopolitical focus and the language of communication of citizens is clearly traceable in many other sociological studies on Ukraine’s accession to the EU and NATO, as well as in the interpretation of Ukrainian history, etc.

“The Russian-language information environment is dominated by the narratives of the “Russian world” and Russian-speaking citizens are more likely to be influenced,” emphasizes the expert.

According to a KIIS study, over the past two years, 4% of Ukrainians have casually switched from Ukrainian to Russian; this transition is also within the limits of statistical error though. However, this observation is alarming.

Unfortunately, Ukrainians still perceive Russian as the language of higher cultural levels without realizing that this “cultural superiority” has been imposed since the time of the Russian Empire and the Soviet Union.

A vivid confirmation of this dangerous statement is the Іnstagram statement by Oksana Marchenko, wife of the odious politician Viktor Medvedchuk, concerning the law on the language:

“We are deprived of the opportunity to learn mathematics, physics, chemistry, and other subjects in Russian, and “fail patriots” isolate Ukrainians from the world knowledge, literature, discoveries, technologies, business and communications … Of course, intelligence is not needed to wash toilets.”

However, today the Russian language is associated with Russian troops rather than with the works by Bunin or Dovlatov.

For the most part, Russia has not exported to the world the achievements of culture or science for a long time, its main products are other “achievements”. At least this is the case for Ukraine.

According to the KIIS survey conducted in 2017, 88% of respondents said they were ethnic Ukrainians, while less than 6% stated they were Russians. The Ukrainian language was reported as mother tongue by 68%, Russian – by 13%.

Not all neighboring states support the draft law on the language – and we can understand them. For example, Hungary may be suspicious of the linguistic policy of many of its neighbors: it had a tense situation with Slovakia for a long time, there are still controversies with Romania.

Until recently, Ukraine has not protected the rights of the representatives of national minorities to receive high-quality education in the official language.

According to experts, it has led to the fact that more than two thirds of graduates of Hungarian-speaking schools in Zakarpattia Region (Ukrainian citizens) fail EIT (External Independent Testing) in the Ukrainian language and fail to get the minimum score at the very least. Accordingly, these schoolchildren cannot enter higher educational institutions, build a career in Ukraine. The language law has been developed to protect their right to education and work.

What happens to nations that lose their own language?

Destruction of the Ukrainian language was one of the main areas of the Russian imperialism policy towards Ukraine. When Ukraine’s neighbors gained independence from the Empire, from Finland and Poland 100 years ago to the Baltic States and the Caucasus, after the collapse of the USSR, these states implemented derusification and a policy to affirm their own languages. It was an element in strengthening their national security.

Serhii Osnach, member of the Expert Committee on the distribution and demonstration of films and one of the authors of the 5670-d language law, notes that language loss is a next to last step towards identity loss.

“If we want to protect our identity and statehood – the Ukrainian language absolutely needs comprehensive legislative support,”  says Osnach.

The authors joke about the situation: they say they should translate the Federal Law on the language into Ukrainian and present it as a text they have developed to see how Russia and the pro-Russian forces in Ukraine criticize it.

“Of course, we would not do it, because Ukraine is an independent state which needs its own laws. But the situation would look pretty funny,” jokes Serhii Osnach.

Not all neighbors want to see our Ukraine as a strong player in the European political arena. But our state becomes an entity and begins to look at the world with Ukrainian eyes rather than with the eyes of its neighboring states.