Reanimation package of reforms > News > Columns > What is going on in the Constitutional Court? 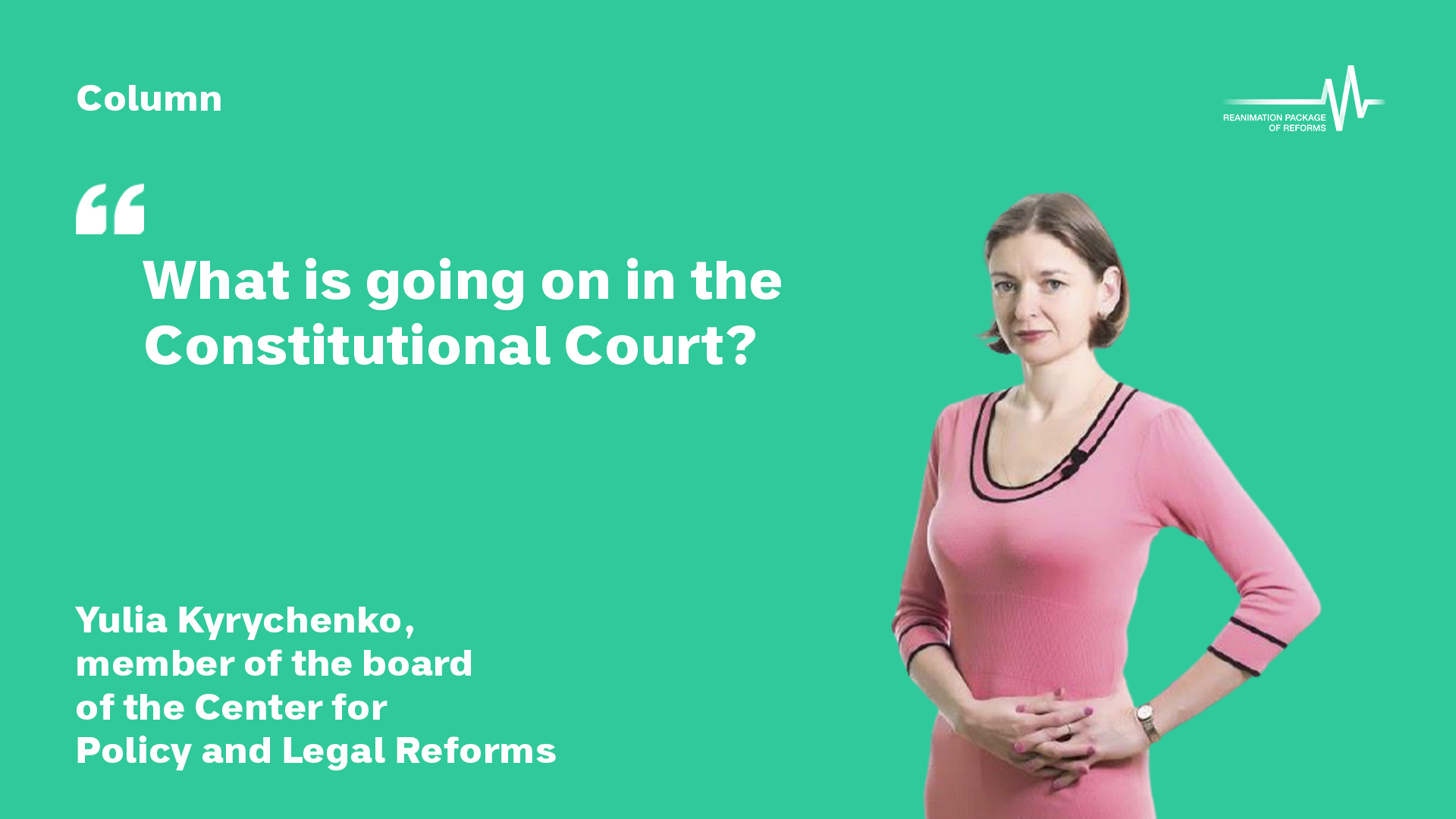 What is going on in the Constitutional Court?

On November 26, President Volodymyr Zelensky  signed decrees appointing two judges of the Constitutional Court of Ukraine: Oksana Hryshchuk and Oleksandra Petryshyn. CPLR  believes that he had no right to do so, as all seats under the presidential quota are currently occupied.

Why do we need a Constitutional Court? And why is the President here?

Is it like a control and audit commission of lawyers, which monitors the government?

Yes. And the decision of the CCU is always final. No one else – the President, the Parliament, the Government or the Supreme Court – can overturn or postpone this decision. That is why the Constitutional Court has always been very attractive to our presidents. The President is the guarantor of the Constitution, but in practice, it turns out (and this applies not only to the incumbent President) that he is perhaps its biggest violator. Accordingly, in order for the President’s unconstitutional steps to be implemented, he needs control over the CCU. And today’s history is also dictated by the desire of the incumbent President to have more influence on the Constitutional Court of Ukraine. It is not dictated, it is beautifully declared: to resolve the crisis in the activities of constitutional justice. This is an attempt to increase its political influence.

What powers does the President still have over the CCU?

The Constitution of Ukraine states that the Constitutional Court is formed by three entities: the President, the Parliament (ie, decisions are made by a majority of MPs) and the Congress of Judges. Each of these entities appoints 6 judges. Another nuance: judges must officially take the oath – and only from this moment, and not after the decree, they acquire the status and powers of a CCU judge. But this is more of a ceremonial event.

On November 30, this very formality prevented the formation of an illegitimate Constitutional Court: judges appointed by the President were not sworn in.

Forming the CCU: what is the President doing?

Supporters of the presidential nomination believe that the President has previously fired two CCU judges, so he can now appoint new ones to fill the vacancies. Why is this logic wrong?

The fact is that the President cannot dismiss CCU judges. He can only appoint six judges according to his quota – and no more.

The president does not like the two judges who were appointed by President Yanukovych. Indeed, the public has questions for these judges. However, the President has no authority to dismiss. This can only be done by other CCU judges. Why is this done? Because it is the CCU that must tell the subjects of its formation – the President, the Parliament, the Congress of Judges – that they are doing wrong. Of course, the Court will become dependent on political actors if they are allowed to dismiss CCU judges at their own discretion. The court will think it is better to remain silent.

How is the President still trying to dismiss judges?

Initially, Volodymyr Zelensky issued decrees on the removal of judges from office, ie temporary dismissal. And then, on March 27, he issued a decree “On some issues of national policy.” The body of the decree reads: “Cancel the decree appointing judges Tupytsky and Kasminin.” I repeat once again that the President does not have the authority to do so.

There is a case in this regard in the Supreme Court. The Administrative Court of Cassation sided with the judges – he could not do otherwise. According to the President’s quota, these two judges are still present in the CCU. But the President believes that they do not exist – and appoints two more.

Indeed, there are two vacancies in the CCU: from the parliament and from the Congress of Judges. But Volodymyr Zelensky cannot use them: then there will be eight judges from the President instead of the required six.

Then why does Volodymyr Zelensky believe that vacancies exist?

And why President needs such appointments? Many politicians believe that President Zelensky intervened in the work of the CCU to extend the term of this parliament. He wants to hold scheduled presidential elections under the current Council and Government.

It really looks like that. At the press marathon, the President said that the CCU will determine the time of the next parliamentary elections. Honestly, from the point of view of an expert in constitutional law, there is not even a dispute when there will be elections. The Constitution states that elections take place on the last Sunday of the fifth year of Parliament’s term. Of course, if the parliament started working in August, it turns out that it has been working for a little over 4 years.

The position in the Constitution on the term of office of 5 years suggests that this term cannot be exceeded. Yes, there can always be early elections (as it was in 2019). But in order to avoid usurpation, a specific deadline is set for the President and Parliament. Therefore, the question here is “When are the parliamentary elections?” not worth it at all. Parliament should work for about 4 years and 5 months. If you add a year, the parliament will work for 5 years and 4 months.

Assuming that the CCU with two newly appointed judges still postpones the parliamentary elections, what is the threat?

If the illegitimate composition of the CCU extended the term of the Verkhovna Rada, it would call into question the legitimacy of the parliament as well.

I am glad that many public organizations joined the Center for Political and Legal Reforms and supported the  appeal to the Constitutional Court  to refrain from swearing in the relevant judges until vacancies are created under the President’s quota.

How to solve this crisis?

It is not enough not to appoint judges. It is necessary, as the Venice Commission advises, to make a real competitive selection of CCU judges. By the way, President Zelensky, in my opinion, had an imitation of the competition. He involved foreign experts in the competition commission, but, importantly, they were openly lied to, saying that the President is currently holding a competition, but appointments will be made when vacancies arise.

It is also worth abandoning the bad examples of previous presidents and not promoting lawyers solely out of political interest in order to have more political influence over the CCU. It is the only right way to allow authoritative lawyers to enter the CCU.

Yulia Kyrychenko, Co-Chair of the RPR Coalition Council, Member of the Center for Politicy and Legal Reforms