Reanimation package of reforms > News > Interview > “We’ll win back the losses from lockdown”: Ihor Burakovsky on economic forecasts for 2022 and the results of 2021 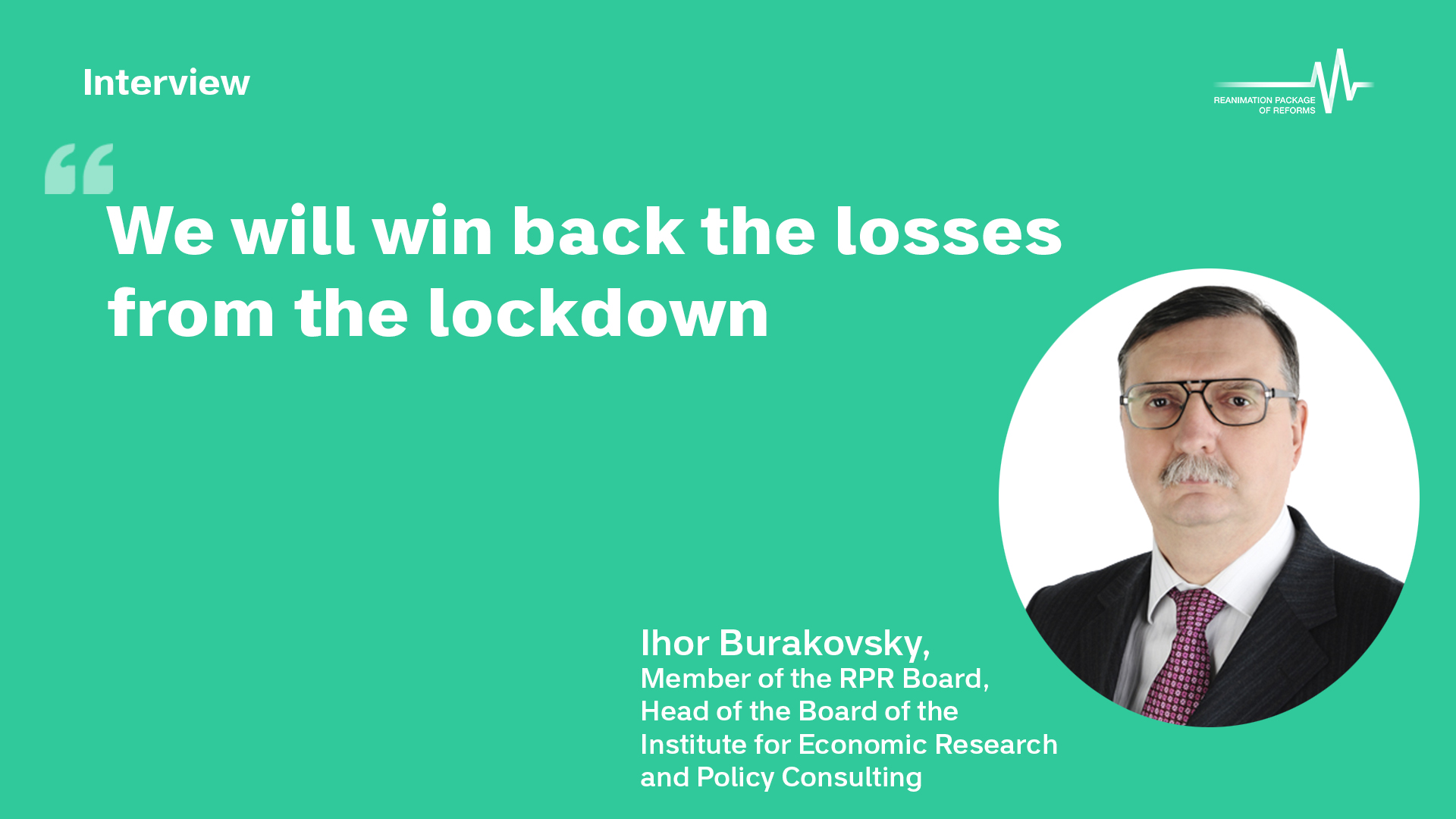 “We’ll win back the losses from lockdown”: Ihor Burakovsky on economic forecasts for 2022 and the results of 2021

Will Ukrainians become richer in 2022? How will the Ukrainian economy grow? What events of the past year will be revealed to us this year? Ihor Burakovskiy, Chairman of the Board of the Institute for Economic Research and Policy Consulting, spoke about this on the air of «Espresso: Capital» on the Espresso TV channel.

What events would you call the main economic events of the year? Can you name five of these?

The first event is the launch of the land market. We may not feel these changes now, but their effect will be significant in the medium and long term.

Apparently, in 2024 it will also be an event of the year because then the land market will be open to legal entities. So far, it works only for individuals.

That’s right. However, the idea of ​​launching a land market has been discussed for a long time, and now this market is finally working. The second event is the resumption of cooperation with the International Monetary Fund. When we communicate with the IMF, it is a determination of the parameters and priorities of our economic policy. We can discuss any options and schemes in the political and expert community, but when there is an agreement with the IMF, everything turns upside down. And we plan our economic policy accordingly. The third event of the year is difficult to formulate, perhaps –  it is a delicate situation in the energy sector. On the one hand, it is the issue of tariff formation. We all know what happens to tariffs. On the other hand, these are issues related to the cost of energy and the traditional problems of the year, which we have on the eve of each heating season.
This is obviously a question of the functioning of our energy sector.

The last two events may have been quiet in the general political context. But as an economist, I would mention them. This is the introduction of medium-term budget planning. It is important to see what will happen to this budget for 2022, how it will be implemented, and what the budget for 2023 will be. Will certain priorities be met, or will we, as always, share funds on the annual horizon, look for ways to fill the holes in the Pension Fund, for example?

Finally, the fifth event is raising social standards. But from my point of view, although it is good to raise the minimum wage, to pay UAH 1,000 to vaccinated Ukrainians, this again shows that we are not moving towards social security reform yet. The absence of such a movement is bad, but the increase in social standards is positive in itself. Another question is whether we are satisfied with such an increase.

What do you mean by mentioning payments to vaccinated people, increased pensions, and minimum wages?

This is a complex problem that is difficult to describe in a short time. Here is the question of determining the subsistence level, to which we have a lot of things tied. And the government acknowledged that the current subsistence level, which is now around UAH 2,000, does not reflect anything, and this is rather a technical value. Here is the question of targeted subsidies. This is an eternal theme. And due to rising prices for energy and utilities, the issue of subsidies is becoming more acute. This is also an issue related to pension reform – it is also an issue of social security. By 2023, by the way, it is planned to launch the second mandatory funded pension system, as well as the Fund for Future Generations. From my point of view, it is quite an ambitious task to launch two such significant tools. Well, let’s meet in a year and talk about how it worked.

I am frightened by the lack of a clear vision of reform. One idea is declared first, and the draft law appears with a completely different one. Of course, it is possible to talk about the Fund for Future Generations, but the first payments are planned after 18 years from now. So another politician will be responsible for these promises…

Here are some problems. The first is the problem of policy priorities. Do you remember that last year we talked about the country’s economic audit, the vectors of economic development, the economic development program adopted by the government? Now, in fact, no one mentions this document. What is his fate? Obviously the same as in other multi-page documents… The second problem. This year has shown that we have a multipolar system of economic decision-making. There is a Cabinet of Ministers, but it is in a suspended state – its program has not been approved. On the other hand, the parliament is trying to throw in its ideas. And, of course – the President and the National Security and Defense Council. Thus, we have a situation where in the field of economic policy, we have a president with his National Security and Defense Council, government, and parliament. And there is the National Bank, which, fortunately, has not yet entered all the vicissitudes of economic policy. This weakens the effectiveness of our economic policy. I will say naively – it should not be so.

It is also stressful that ideas such ideas are announced before legislative initiatives for their implementation. The President first announced payments of UAH 1,000, but the terms and recipients were discussed after that.

When it comes to budget planning, plans to increase salaries, pensions do not take into account the budget sources. There is no financial stability in such planning. How will the same Pension Fund or the Fund for Future Generations work?

When we plan for something longer than a year, we are talking about medium-term budget planning. Politicians want to be good to everyone here and now, but it’s important to do the planning. This year we are raising the salaries for doctors, next year – for teachers. There are issues that do not lose their focus every year, such as defense and security.

Can such planning work in Ukraine, given that we could not predict much? In 2007, no one knew about the crisis in the real estate market, in 2019 – about the pandemic…

The maturation of processes has accelerated in recent years. It used to be planned for 10-15 years, but today it no longer works. On the other hand, there is a golden rule: the economy is the distribution of limited resources. If we jump from one extreme to another every time, we will not achieve anything.

We now understand that the world is facing a pandemic. So we should look for tools that we will keep in stock, but thanks to which we can quickly mobilize funds, for example, to purchase test systems. To help minimize potential losses.

So complaining about the unpredictability of the situation means that the money was actually used inefficiently. At least half of the people who say “it’s unpredictable” are people who want to benefit from our unorganized budget process.

The country is in an energy crisis. However, every year before the heating season, we discuss whether we will have enough energy resources. And how is this season different?

We have a traditional problem: Ukraine begins to replenish coal reserves when it is already running out of coal. I don’t know how to explain it. However, there is a constant situation when the state is not ready for winter – on the one hand, and on the other – private companies that also play in this market and look at the state.

Here we lack coordination. We may treat energy companies differently, but they are significant players in the economic market. Normal economic relations must be built with them.

Finally, we need to streamline the tariff mechanism. Because today, tariffs are the result of the trade of various stakeholders, some of whom speak from social positions, others from political positions, and still others from economic positions. But there is not enough of what is called “ratio.”

And how should it be ideally? Market rates and subsidies for those who can’t afford them?

Ukraine’s memorandum of understanding with the IMF on fiscal and economic policy clearly states that we are reaching market prices. And from what source can we compensate for their growth? But at the same time, it says that the government is implementing an effective state aid system. This is a double approach of the IMF: on the one hand – market prices. On the other hand – state support.

The launch of the land market is a large-scale political and economic experiment. Therefore, it is difficult to say whether it is moving in the right direction. Experts dealing with the land market have repeatedly said: do not expect results, such as fundamental GDP growth, in the first year. We will get the effect in the medium and long term. And this moment is extremely vulnerable politically and economically. So let’s wait. It seems to me that it was rightly done that, as a result of the functioning of the land market in the first year, appropriate changes will be made to correct the relevant mechanisms. And this is documented. That is, what we have now is working out the mechanism, and then we will focus on what those economic realities will give us.

And what about your personal outcome of the year?

My economic status has not changed. Although if we talk about the structure where I work now, it has become more difficult to work. Not to mention the benefits of telecommuting. Online for me is an increase in workload. On the other hand, it is an opportunity to observe my work from different angles, to rethink it.

What will 2022 bring to the economy? What are your expectations and forecasts for your institute?

We will end 2021 with a small increase, and growth will be at 2.8% of GDP. Earlier, we talked about 3-4% of GDP, but obviously, the situation is different. In 2022, we expect about 3-3.1% of GDP. This is from what we know now. This means that in 2022 we will to some extent, win back what we lost during the years of lockdown. In fact, we will reach the economic level we had before the economic crisis associated with Covid-19.

Will we become richer?

On average, we will become richer. However, now society is very differentiated. Including due to digitalization, but there are other factors. Therefore, the average indicators are unlikely to say anything. We should talk separately about different segments of the population, different categories, different professions. And let’s not forget that changes in the labor market are not only related to COVID-19 or economic policy. They are related to the fundamental processes that have been taking place in Ukraine for the last 10-15 years. People need to understand that the world around them is changing dynamically. Both the responsibility of the state and our responsibility for ourselves are changing.

Unfortunately, the problem of poverty in Ukraine remains. Unfortunately, there is such a thing as “new poor.” How to make economic growth inclusive? To make it sure, that all segments of the population will benefit from the economic growth of the country. This is a global problem facing both the EU and the US. That is why many economists and politicians today say that our recovery from the pandemic should be based on two “whales.” This “green” restoration is a transition to a qualitatively new way of socio-economic thinking and production, and the second is a just restoration so that everyone can enjoy the benefits of economic growth and development.