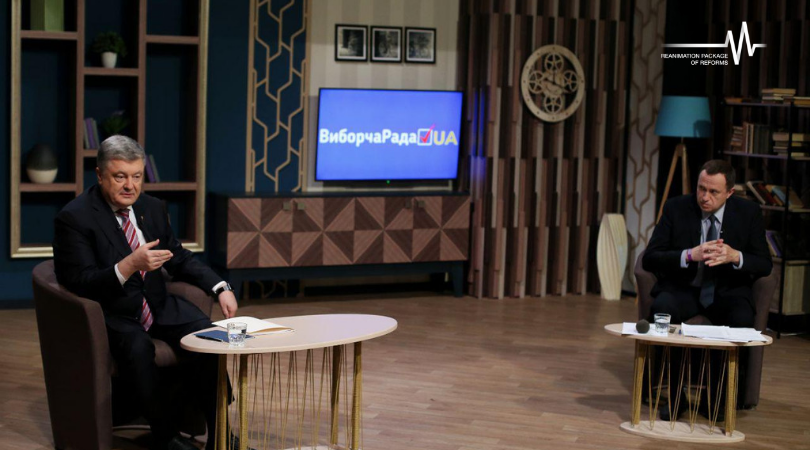 On April 17, experts of the non-partisan initiative Election Council UA (Vyborcha Rada UA) and the Reanimation Package of Reforms Coalition held a public discussion with a candidate for the President of Ukraine Petro Poroshenko at the public broadcasting company. Both winners of the first round of the presidential election were invited to the discussion, but Volodymyr Zelenskyi declined the invitation of the experts. The discussion with the candidate, Petro Poroshenko, was to draw the attention of voters to his answers to the experts on the following topics:

The experts began the discussion with the question on Petro Poroshenko’s steps in combating corruption in Ukroboronprom (Ukrainian Defense Industry) after the headline-making journalistic investigation.

The President noted that it a decision has already been made to conduct an independent audit of Ukroboronprom declassifying a number of documents of the state concern that are necessary for this procedure. Also, Oleh Hladkovskyi, First Deputy Secretary of the National Security and Defense Council and one of the main figures in the journalistic investigation was dismissed.

Representatives of the public reminded Petro Poroshenko that national security depends not only on the development of modern weapons, which should restrain the external aggressor, but also on the internal unity of the citizens of our state.

One of the key anti-corruption authorities – the National Agency on Corruption Prevention (NACP) – has demonstrated extremely poor performance, the experts emphasized. Petro Poroshenko replied that he was also not satisfied with the work of the anti-corruption infrastructure in Ukraine, which, he said, should be rebooted. The High Qualification Commission of Judges of Ukraine (HQCC) and the High Council of Justice (HCJ) also demonstrated an unsatisfactory level of work, in particular, HCJ has dismissed a mere 15 judges who failed the assessment, while other judges continue to hold their office, – the representatives of the public noted. The current president did not directly comment on this remark of the public, but stressed that the judicial reform as a whole was successful.

In addition, Mr. Poroshenko avoided answering questions from experts on whether he supports the adoption of the law on the impeachment of the President. See full broadcast of the discussion.

RPR avoids political bias, party loyalty and affiliation with businesses in its activities. The coalition does not support any candidate participating in presidential or parliamentary election campaigns. See the communication policy of the coalition here.

The event was organized by Election Council UA with the organizational support of the School for Policy Analysis NaUKMA within the “Join Us!” Community Activity Promotion Program funded by the United States Agency for International Development (USAID) and implemented by Pact in Ukraine, as well as the Reanimation Package of Reforms within the institution building program of the Centre for Democracy and Rule of Law, with the financial support of Sweden.