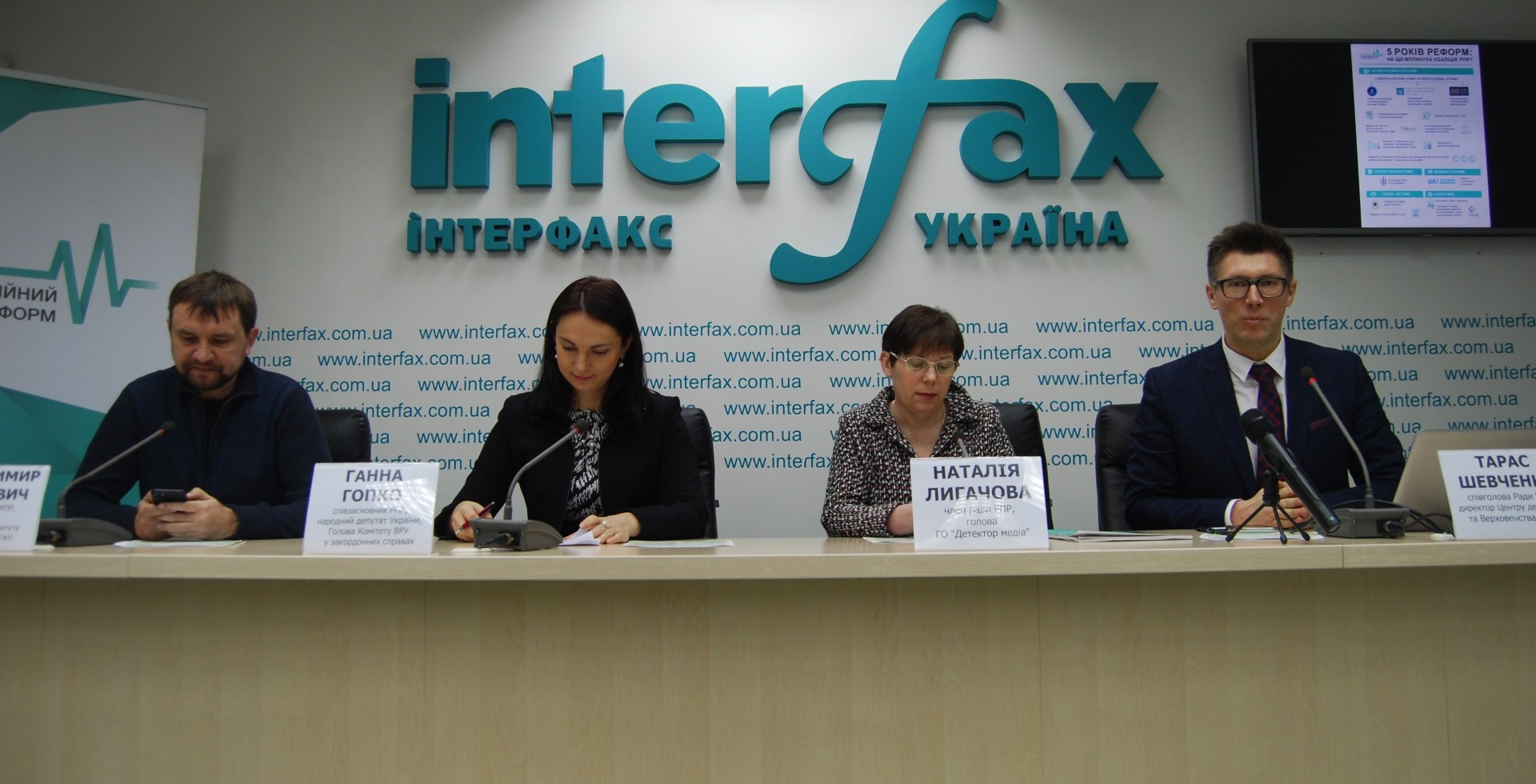 In late February and early March, the Constitutional Court recognized the provision which foresaw responsibility for illegal embezzlement as unconstitutional. Ukrainian media then revealed a large-scale corruption case in the defense sector. In the background of these events, light at the end of the tunnel is hard to see in the Ukrainian war on corruption.

However, the light does indeed exist; it is just often neglected by focusing on the negative aspects of what is going on in the country. One of the most significantly underestimated stories in Ukraine is its civil society which was born during the Revolution of Dignity and is still active today. A leading example of this is the Reanimation Package of Reforms (RPR), a coalition of NGOs which forms an agenda for the government on varying issues. Recently, the coalition marked the fifth anniversary of its creation by summing up the results of its work and defining the main challenges.

The first Reanimation Package of Reforms (RPR) gathering took place in  January 2014 amid the Euromaidan protests just after the Ukrainian Parliament had passed the so-called dictatorship laws forbidding street protest, free media, Internet and political opposition. Also at that time the first cases of activists going missing came to light. At that time the first participants in the future RPR coalition defined the first priorities for reforms in Ukraine – new judiciary, new police, anti-corruption legislation and open registering of real estate.

“We were confident that Yanukovych would lose power, and the country needed to change its system as soon as possible. But nobody could imagine that Vladimir Putin would come to Crimea and the reform process would take place under conditions of war,” says Hanna Hopko, former Maidan activist and MP.

“In the modern history of Ukraine, the Maidan has always been considered as a protest phenomenon. It’s always “Get away! shame!.” We know how to fight against someone. But after the third such revolution, a certain number of people realized that it was not enough. We should not just remove criminal power, but formulate the agenda. RPR is a good example of formulating something new,” Volodymyr Viatrovych, head of Maidan Civic Sector says.

Euromaidan Press has undertaken an overview of the reforms that have been advocated by the RPR coalition and on the changes in its relationships with the government: The fight against corruption required great attention of the public activists and became a requirement of Ukraine’s international partners in terms of the country’s European integration.

Under pressure from civil society, the new anti-corruption institutions, the Asset Recovery and Management Agency and the National Agency on Corruption Prevention have been created. The prospect of visa-free travel to the Schengen Area for Ukrainian citizens was linked to the process of establishing the Specialized Anti-Corruption Prosecutor’s Office (SAPO), which has been in existence since 2015. In addition, during the same period the new institution, National Anti-Corruption Bureau of Ukraine (NABU), has begun investigating top-level corruption cases.

“Another way to fight corruption is to limit embezzlement opportunities for corrupt officials. Previously it was government procurement. But now we have Prozorro and E-data: of course, they need improvement, but we have started the process,” Hopko explains, “Second, we need the real process of privatization, which currently does not work as we had expected. This is on our short to-do-list.”

“Tactics of split elites” is proposed by analysts of Chatham House in the last research on Ukraine. Volodymyr Dubrovskiy, a co-author of the research, told DW what it means: a “peace pact” could be made with the part of the corrupt officials who were forced to participate in the corruption deals of “senior officials.” It should guarantee them amnesty in exchange for supporting anti-corruption reforms.

It is unlikely that such a proposal will gain support among Ukrainians, especially after the latest decision of the Constitutional Court of Ukraine on 26 February, when it ruled to recognize article 368-2 of the Criminal Code which foresaw responsibility for illegal embezzlement as unconstitutional [The Petro Poroshenko Bloc faction has submitted an alternative bill which resolves the judicial issues of the law, now in the best-case scenario, the Parliament would pass it within the next two weeks – Editor]. It puts the effective work of the new investigation institutions, the National Anti-Corruption Bureau (NABU) and the National Agency on Corruption Prevention (NACP), dealing with top-level corruption in question. Some of their cases will now be closed.

Judicial reform is the area where much has been achieved, but the reform can hardly be called successful.

“In general, we feel obliged to say that despite some shifts the judicial reform in Ukraine has failed,” RPR states in the Roadmap of Reforms (2019-2023).

The previous stages of the reform envisaged forming of the new Supreme Court, qualification assessment of judges and reforming the courts. Also under pressure of activists the Public Integrity Council, a civil society watchdog in the judiciary have been created to assist the bodies of judicial self-governance estimating integrity and professional ethics of judges. So the criteria of professional ethics have been specified. Nearly three years after the reform representatives of different civil society NGOs involved in the reform underline that the bodies of judicial self-governance block the reform and let the judges with shady reputation continue to remain within the system.

In 2014-2017, legislative changes in the area of media regulation and freedom of information propelled the reforms that were launched in the mid-1990s and early 2000s. On 19 January 2017, the National Public Broadcasting Company of Ukraine (UA:PBC) was established. It became a successor to the National TV and Radio Company. In 2016, the process of reforming of the printed media started.

“In 2018, the company was allocated a mere 50% of the statutory budget, which brought it to the brink of bankruptcy. That is why changes to the law that stabilizes the source of funding and eliminates the risks of political interference are crucial for the broadcaster’s institutional independence,” RPR Roadmap of Reforms says.

In the near future, the Reanimation Package of Reforms coalition is to change its format and become a union. Their experts have created a Roadmap of Reforms (2019-2023) for the authorities. The project details what the RPR considers the most important changes for the next 5 years.

“Regardless who wins the next presidential and parliamentary elections, we take responsibility for ourselves to control, help, and press to implement the agenda,”promises co-chairman of the Council of RPR Taras Shevchenko.

Despite politicians often becoming guests of the RPR office – both for consultations and for self-promotion, and despite the upcoming parliamentary elections, RPR prefers to remain a part of civil society and remain outside politics.

“As a coalition, we are a non-partisan, non-political organization and we do not want nor have any plan to take part in the election campaign. But whoever comes to power, we will promote an agenda to them,” believes Shevchenko.