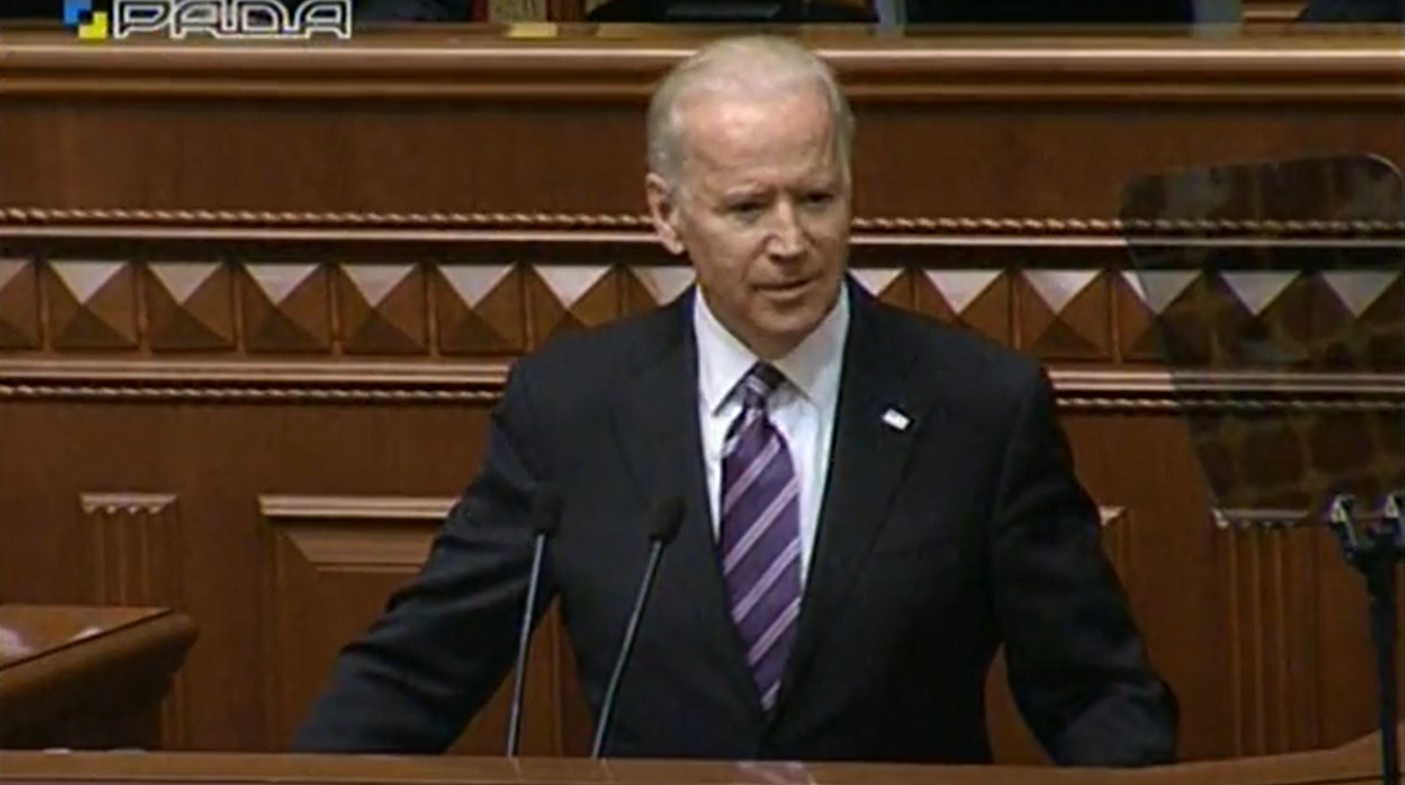 In an address at the Verkhovna Rada in December of 2015, Joe Biden, the U.S. Vice President at the time, characterized the “unrelenting aggression of the Kremlin and the cancer of corruption” in an economy dominated by oligarchs as the biggest threats to Ukraine’s independence, democracy and prosperity.  He pledged continued American support for Ukraine and called on Ukrainians to vigorously pursue judicial reforms and anti-corruption efforts.  As Ukraine marks the seventh anniversary of the massacre on the Maidan during the Revolution of Dignity, these issues remain at the forefront of U.S-Ukraine relations and were the subject of a recent Transatlantic Task Force on Ukraine online discussion.

One the speakers at that forum, Olena Halushka of the Anticorruption Action Centre in Kyiv, said that today, despite achieving “tremendous progress” on its path of democratic transformation since 2014, there remain “two very strong and powerful enemies” of Ukrainian reforms — the Kremlin and Ukraine’s oligarchs – who are “situational, natural allies in making Ukraine fail.”  Manifestations of their malign influence can be seen in anti-Western and anti-reform narratives in the media and the efforts of oligarch-friendly and Kremlin-friendly members of parliament and government to water down anti-corruption legislation and weaken the National Anti-Corruption Bureau of Ukraine (NABU) and the Specialized Anti-Corruption Prosecutor’s Office (SAPO), as well as recent decisions of the Constitutional Court and Kyiv Pechersk District Court undermining reform efforts.  She was also critical of Prosecutor General Iryna Venediktova for blocking some corruption cases.

Ms. Halushka applauded the emphasis that the International Monetary Fund (IMF) and G-7 Ambassadors in Ukraine have placed on rejuvenating the High Council of Justice through vetting of new members by international experts and monitoring by civil society.  As the entity responsible for judicial appointments and reprimanding and removing corrupt judges, this is the linchpin of judicial reform in Ukraine, she explained. Judicial reforms are fundamental to all others, she said, and noted that Ukraine’s Western partners are doing a good job in terms of establishing priority conditionalities for assistance. However, Ms. Halushka called on the international community to be more proactive in combatting Kremlin aggression and influence, citing Russia’s reinstatement into the Parliamentary Assembly of the Council of Europe, despite Moscow’s ongoing large-scale violations of human rights and the sovereignty of its neighbors.

According to Vadym Miskyi of Detector Media, Ukraine’s leadership did take an important step in curbing Kremlin disinformation in Ukraine when the government blocked the broadcasts of three Ukrainian national television channels that have often promoted narratives supporting the Kremlin’s aggression in Ukraine, justifying Russia’s annexation of Crimea and blaming Ukraine for the war in the Donbas.  These stations (Channel 112, News One and ZIK) are linked to Viktor Medvedchuk, known among reformers as an odious Ukrainian politician with strong ties to Vladimir Putin. Most civil society organizations in Ukraine have not objected to the banning of these TV channels and do not see the move as an encroachment upon freedom of the press, concurring with the government’s justification that the decision was based on national security grounds, he explained.

Mr. Miskyi also discussed the important role of public broadcasting – known as Suspilne in Ukraine – which despite unstable funding, serves as a counterweight to oligarch-controlled news media in Ukraine, whose editorial policies are influenced by the personal political and financial interests of the station owners rather than an adherence to journalistic ethics and mission.  To help ensure the continued success of Suspilne, he encouraged Western partners to be engaged in promoting the adoption by parliament of an improved funding model for the organization and to discourage political interference in the work of the company, insisting that its management remain independent.

Also speaking about media was Ihor Rozkladai of the Centre for Democracy and Rule of Law (CEDEM).  He expressed hope that the new draft Law on Media will create better enforcement mechanisms enabling the National Council on Broadcasting to levy more impactful sanctions for violations by media organizations.  He also called for stronger international cooperation in combatting disinformation, noting the influence of Russian and Russian-financed programming and media outlets in Europe.

Denys Denysenko, Executive Director of the Reanimation Package of Reforms (RPR) coalition, a co-organizer of the event, talked about efforts in parliament to weaken the role of Ukrainian civil society organizations, particularly through restrictions on advocacy work and “foreign agents” (i.e., reform experts funded by Western donors).   Some of these initiatives were “synchronized with a discreditation campaign,” most notably labeling reformers as Sorosiata (alleged lackeys of philanthropist George Soros) and accompanied by other anti-Western narratives, he said.   These and other measures are having a chilling effect on the participation of civil society in policy development and reform.

Andrii Osadchuk, a Verkhovna Rada lawmaker and Deputy Chairperson of the Committee on Law Enforcement, provided a parliamentary perspective on reform challenges.  He said it is important to keep in mind that for the past seven years Ukraine has been trying to implement a huge number of reforms simultaneously, adding that today it is important to focus on building “management capacity” for the implementation of these reforms. And although the prosecution of cases of high-level corruption is very important, there also needs to be a focus on corruption prevention and a prioritization of good and ethical governance. Mr. Osadchuk explained that success in the war against corruption requires breaking through a seemingly impenetrable “huge wall” – the courts – so the paramount priority is for everyone to be maximally focused on the judicial system.  “Without court reform, nothing will happen.”

It is also important for the West to support the reform agenda in the regions, with many new local stakeholders being empowered through decentralization to be agents of change.

Commenting on how the new administration in Washington might open the door for improved U.S.-Ukraine relations and engagement, Andrii Osadchuk said: “For Ukrainian society and Ukrainian politicians, it’s absolutely unique that the President of the United States knows by name a lot of people here in Kyiv and Ukraine… That’s why it’s definitely a window of opportunity before us,” making it easier to encourage President Zelensky and his circle to fulfill their reform commitments.

At the recent, virtually-held Munich Security Conference, President Biden delivered a key statement about Western support for Ukraine: “Putin seeks to weaken the European project and our NATO Alliance.  He wants to undermine transatlantic unity and our resolve, because it’s so much easier for the Kremlin to bully and threaten individual states than it is to negotiate with a strong and closely united transatlantic community.  That’s why standing up for the sovereignty and territorial integrity of Ukraine remains a vital concern for Europe and the United States.”

During the TTFU webinar, Jonathan Katz, a Senior Fellow at the German Marshall Fund commented that “the Biden Administration has been very clear, crystal clear about continued support, defensive support and military support for Ukraine” and that he also expects a new American emphasis on Ukrainian democratic reforms:

“Clearly this is a moment in time with a new Administration in Washington refocused on Ukraine to help Ukraine move forward on key reforms [and] support Ukrainian civil society’s efforts… Democratic reforms were not a top-line [Trump] White House priority, whereas with this incoming Administration, the Biden Administration, democracy, rule of law, combatting corruption is a top priority.  The president has spoken about this, and I think that this same line of combatting these issues and addressing them is also shared in Brussels.”  Mr. Katz added that “the democracy and rule of law component are important not only to addressing the internal [Ukrainian] challenges but also clearly a component and a prerequisite for integration” with the EU and NATO.

Similarly, Orest Deychakiwsky, a former senior policy advisor at the Helsinki Commission, said: “There is a broad consensus here in Washington that the Biden Administration offers not only a return to normality after the last four years, but also the prospects of and actually deepening of U.S.-Ukraine relations.”  Furthermore, “President Biden himself knows Ukraine as no other US president before him – he has a long- standing track-record dating back not only as Vice President but even back to his Senate days.  And those working on Ukraine in this Administration, especially at the State Department, have a deep knowledge of Ukraine – one that I don’t think I’ve ever seen before in all my years of working in Washington… It’s still very early, because it’s only a month in, but we’ve already seen high-level phone calls with counterparts at DoD [the Department of Defense] and the Secretary of State [Antony Blinken] with [Ukrainian Foreign Minister Dmytro] Kuleba.”

Mr. Deychakiwsky adds that there is strong bipartisan Congressional support for Ukraine and “both the new Administration and Congress are fully cognizant of the dangers posed by Russia not only for Ukraine, but for our own country and our allies and democratic partners.  So, I think there are grounds for optimism for renewed, definitely more vibrant U.S.-Ukraine partnership.”  The main impediments to such an energized partnership are the many competing priorities and challenges that the Biden Administration must deal with and, even more significantly, the lack of progress on rule-of-law and anti-corruption reforms in Ukraine.

Bruno Lete of the German Marshall Fund’s office in Belgium offered a European perspective to the discussion: “Ukraine, here in Brussels, still has a lot of attention, it remains a big item on the EU political agenda.  I would agree with my colleagues that there is actually an opportunity for Ukraine to become a more and more transatlantic issue, where Europe and the United States may cooperate…  The fight against corruption remains a top priority for the EU.  These reforms are essential so that Ukraine, but most of all the Ukrainian people, can benefit from the EU-Ukraine Association Agreement” and free trade pact.

The Kyiv moderator of the Transatlantic Task Force on Ukraine forum was Denys Davydenko, Advocacy Manager at RPR.  TTFU is led by the German Marshall Fund of the United States and the Reanimation Package of Reforms coalition in Ukraine. TTFU contributes to strengthening relations, advancing democratic and rule-of-law reforms and furthering Ukraine’s Euro-Atlantic integration and security.  Video of the webinar can be viewed via link

Adrian Karmazyn is a former chief of the Voice of America’s Ukrainian Service.