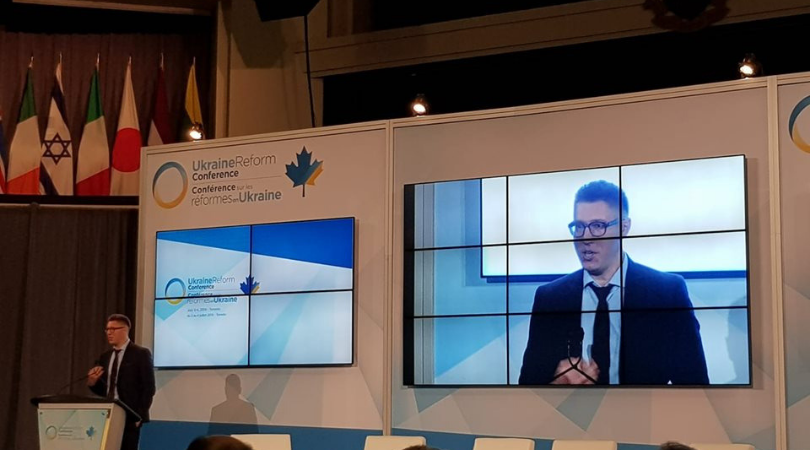 The Ukraine Reform Conference, the key international event on reforms in Ukraine, finished today at night (Kyiv time) in Toronto, Canada. Prime Minister of Canada Justin Trudeau and President of Ukraine Volodymyr Zelenskyi, Minister for Foreign Affairs of Canada Chrystia Freeland and the ministers of many other countries took part in this conference. The Government of Canada also gave civil society representatives the opportunity to express their position at this conference. Not only did we deliver a speech, but also had an opportunity to present Toronto Principles developed by NGOs.

Toronto Principles is a document that describes important reforms. We sought to capture the current situation of reforms in this document – it is important to monitor the irreversibility of reforms, as well as to see the direction of future change.

To develop Toronto Principles, the Reanimation Package of Reforms Coalition coordinated the work of a large number of NGOs, held regional discussions in Kharkiv, Odesa and Lviv, offered an online discussion of the draft document for active citizens through the RPR website, and also enlisted the support of business associations. To date, the document has been supported by over 80 NGOs.

Toronto Principles consist of three blocks that are important for the present-day Ukraine:

Security and Rule of Law covers the country’s security, justice sector reform, and increase in the effectiveness of the anti-corruption sphere.

Democracy and Good Governance – contains parliamentary reform; e-democracy and the protection of civil society, the issue of the transparency of the Ukrainian media.

See full text of Toronto Principles on the RPR website.

The reform process is described in much more detail in the industry briefs on reforms in 12 key areas. These documents were prepared by representatives of various NGOs.

We will continue to monitor whether the state moves within the limits defined in the Toronto Principles. In a year, Vilnius will host the Ukraine Reform Conference 2020. President Volodymyr Zelenskyi announced in his speech that he wants to come to Vilnius in a year and to talk about achievements rather than plans. And in our turn, we will be able to evaluate these achievements in Vilnius in accordance with our Toronto Principles.
Taras Shevchenko for the UP