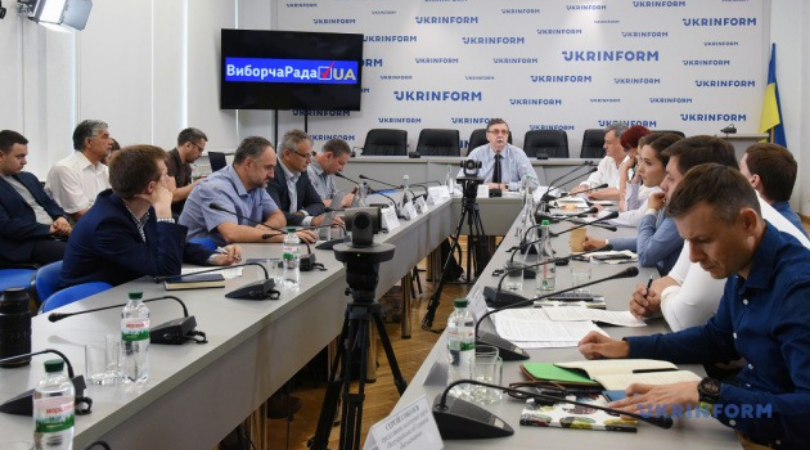 Ukraine needs to introduce a market for agricultural land, the only body to investigate economic crimes, and the oligarchs’ influence on politics should be substantially limited – such was the consolidated position of the representatives of political parties “Servant of the People”, “Voice”, “European Strategy”, All-Ukrainian Union “Fatherland”, “Power and Honor” and “Ukrainian Strategy” in the public discussion organized by the Electoral Council UA and the Reanimation Package of Reforms (RPR) Coalition on July 4.

The process of state-owned enterprises privatization should be completed, and small and medium-sized businesses should receive preferences from the state – virtually all representatives of political parties agreed therewith.

“The most important issue is maintaining macroeconomic stability: continue cooperation with the IMF, preserve the independence of the NBU and minimize budget deficits,” said Dmytro Romanovych, a candidate from the Voice party.

Ukraine should carry out maximum possible privatization, some loss-making enterprises can be sold for a symbolic 1 UAH, suggested the representative Servant of the People Halyna Tretiakova.

According to her, the economy has 3 main components: business, public sector and households.

“For the last five years, businesses and the state have been the focus of attention. More attention should be paid to households, because they create jobs where the state cannot do this,” says Tretiakova, adding that small enterprises should receive cheap loans.

Ivan Miroshnychenko, a candidate from the Power and Honor party, noted that only those state-owned enterprises that are functioning in the security sphere cannot be privatized.

First of all, investments should be attracted in infrastructure and high value added areas (medicine, biotechnology, etc.), stimulating export-oriented production, says the representative of the Ukrainian Strategy Serhii Marchenko.

Serhii Soboliev, an MP from the Fatherland, proposed to return to the issue of restructuring foreign debts, as well as to approve the general plan for the development of cities and towns for the next 2 year.

“It is necessary to stimulate deshadowing of small and medium-sized businesses by introducing the simplest accounting system,” suggested Nina Yuzhanina, an MP from the “Petro Poroshenko Bloc (now European Solidarity).

Representatives of the parties are unanimous in saying that in order to reduce the influence of large businesses on politics, it is necessary to conduct a demonopolization of the economy and prevent the withdrawal of capital to the offshore zones.

It is necessary to stimulate the creation of public media, says Halyna Tretiakovakova. Media owners (oligarchs) should be personally responsible for interference with the media editorial policy, added Pavlo Kuhta, a representative of the Voice.

All representatives of political forces supported the introduction of distributed profits taxation (withdrawn capital tax), maintenance of a simplified taxation system and reduction of salary taxes.

Halyna Tretiakovakova suggested expanding the simplified taxation for households, and Nina Yuzhanina talked about the need to use this system for entrepreneurs of the 2nd group.

The land market introduction was supported by the representatives of all political parties. The European Solidarity and the Fatherland offered to launch this market only after the adoption of a thorough regulatory legislation, and the Voice proposed to initiate the adoption of effective antimonopoly laws.

“Sale of land should only be available to Ukrainian citizens,” said the representative of the Ukrainian Strategy Serhii Marchenko.

“The land that is owned by state cannot be sold, it can only be transferred under a long-term lease agreement,” suggested Ivan Miroshnychenko.

Security structures in the economy

Representatives of all political forces were unanimous on the issue of the need to create a single independent body that would investigate crimes in the economic sphere.

Yuzhanina stressed that such a body should not be subordinate to the Cabinet of Ministers so that it does not to turn into a “punitive” instrument of the Government.

The security service should be deprived of authority to investigate economic crimes, added Kukhta.

To recap, on June 27, a discussion was held with representatives of the Fatherland, the Voice, the European Solidarity, the Power and Honor and the Ukrainian Strategy on political and legal reforms.