Reanimation package of reforms > News > Columns > Threats to rapid peace in the Donbas: what’s wrong with Minsk and the swift elections in the SDDLR 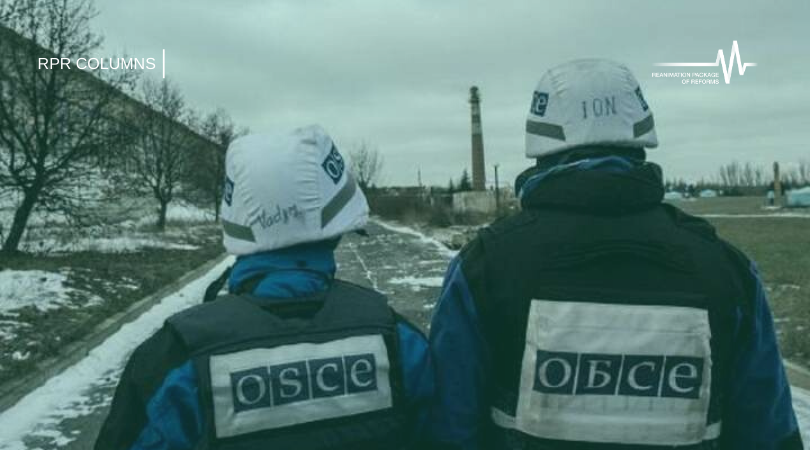 Threats to rapid peace in the Donbas: what’s wrong with Minsk and the swift elections in the SDDLR

The idea of ​​round-the-clock patrolling by representatives of the OSCE Special Monitoring Mission (SMM) of the Donbas Conflict Zone, to which both German Chancellor Angela Merkel and President of Ukraine Volodymyr Zelensky spoke, actually gives an opportunity to return to the issue of Ukrainian-Russian border monitoring.

Skepsis is added here by Vladimir Putin’s latest statements , which show that there is no interest in ending Moscow’s aggressive policy. Russia insists that the transfer of control to Ukraine will begin after the election.

This study proves the dangers of the Kremlin’s path.

The New Europe Center has analyzed the current challenges faced by the OSCE observers (primarily due to Russia’s destructive stance), as well as international experience, and has reasoned conclusions: elections in the occupied territories will not necessarily lead to a renewed control of Ukraine over border .

In this context, it is even more important for Ukraine to prepare a reinforced concrete position in the Quartet negotiations, proving that a closed border, controlled by either governmental or international missions, is a key prerequisite for demilitarization and democratic elections in the non-controlled part of the Donbas.

Not all problems are in the dark

In Paris, during a meeting of the Norman Quartet, Angela Merkel announced a principled agreement to strengthen OSCE patrolling in the conflict zone. If this proposal is supported by all OSCE participating States, Donbass observers will work not only during the day, as is the case today, but also at night.

This arrangement did not initiate a fundamental change in the mandate of the mission, since the OSCE had initially been authorized to conduct round-the-clock patrols, but for security reasons it could not always be used at night. In order to partially change this deficiency, the OSCE SMM use the hardware that allows to record violations on an ongoing basis. These are 30 surveillance cameras located in key sectors near the collision line, unmanned aerial vehicles (UAVs) adapted for night work and more.

Enhanced surveillance by the physical presence of observers will not change the situation fundamentally, but the enhanced capabilities of SMMs should still allow the organization to exercise more effective control over the frontline.

However, the biggest obstacle for SMM observers is not the ban on night work, but the actions and decisions of fighters.

For example, in the first half of 2019, the mission identified approximately 450 restrictions and other obstacles encountered by SMM observers in the performance of their mandate, nearly 90% of these occurring in areas not controlled by the Ukrainian government.

Important detail: systematic bans and restrictions are fixed near the uncontrolled governmental section of the Ukrainian-Russian border. During the same six months, 42% of the total number of visits to the border were restricted by the freedom of movement of observers.

Against this background, the revision of the SMM’s mandate may cause Ukraine to return to the issue of monitoring the Ukrainian-Russian state border again .

According to the fourth paragraph of the first Minsk Agreements of September 2014, Ukraine, Russia and the OSCE agreed to “ensure continuous monitoring at the Ukrainian-Russian state border and verification by the OSCE of establishing a security zone in the border areas of Ukraine and the Russian Federation.” This item is not implemented.

In addition, the militants do not provide security guarantees for SMMs to open patrol bases in cities closer to the border, making the mission more mobile and forced to travel long hours from the central base to the border. Not surprisingly, the average border monitoring time is only an hour a day!

Yes, there is a separate OSCE mission operating at the two Russian checkpoints, ” Gukovo ” and “Donetsk”, which has a mandate for round-te-clock monitoring of their work. But its data does not closely reflect the border crossing.

This mission has access to 40 meters of border, the remaining 400 km are left unattended.

Whenever missions renew their mandate, Ukraine, the EU, the US, and Canada put forward the issue of expanding the geography of the monitoring, but face the reluctance of the Russian Federation to support the initiative.

It is here that Vladimir Zelensky should take advantage of the same “steadfastness” of the Minsk agreements, which the President of Russia so insisted on in Paris.

We need to bring the issue of border monitoring to the agenda and keep it there.

It will not work without a border

According to the international peacebuilding practice covered by the New Europe Center for Conflict Management Experience in the World , a controlled and closed border is an important step in the peacekeeping process.

It should not necessarily be a one-off transfer of control to Ukrainian border guards. The transition phase may involve the involvement of international organizations, in particular the OSCE SMM, with the subsequent transfer of the crossing points to Ukraine’s control.

And most importantly, establishing effective border control is a prerequisite for the proper conduct of local elections in Donbas and for the recognition of their results by international observers .

This issue has arisen not only in Ukraine.

The experience of other armed conflicts suggests that peace in post-conflict territories is sustainable only if there is a clear sequence of actions: regaining control of the border must precede local elections.

Moreover, there should be a pause between these stages.

In the case of young democracies, it should last at least two years. This period is necessary for full demilitarization, for providing conditions for free expression of will, as well as for emergence of a moderate political force capable of counteracting radical politicians.

Moreover, early elections in a polarized environment can lead to social divisions, further escalation and complicate the peacekeeping process.

In successful conflict resolution cases, such as in Croatia and Kosovo, elections were organized after states had gained control of the border crossing.

It is worth studying Ukraine not only on positive but also on negative examples.

Thus, in Bosnia, despite the reservations, national elections were held a year after the conflict ended. The election process took place in a chaotic post-conflict environment and was characterized by numerous violations. The repatriation and reintegration of refugees were not completed, so the electoral rolls were not properly formed. Due to such technical errors, the official voter turnout was 103.9%.

Needless to say, it did not add credence to the results of such a will and their public recognition.

Moreover, there was not enough time to clear the political process from radical forces – for example, one of the registered parties was affiliated with the political force of Zeljko Roznatovic , later accused by the International Criminal Tribunal for the former Yugoslavia of crimes against humanity.

There is another crucial argument against early elections.

Their organization, even before the completion of the demilitarization program – a process that takes time and a balanced approach – raises the likelihood of renewed armed confrontation . A party dissatisfied with the election results may try to change their results with the help of weapons or fighters from other countries. This was the case in Angola, when in 1992 one of the parties won the election by a small margin, and the losing political force tried to challenge the results of the will by means of weapons. The confrontation led to an escalation of the conflict, which lasted until 2004.

In these and other similar examples, there are lessons for Ukraine.

Ukrainian voters in the Donbass will not feel safe and will not be able to execute their free will if the post-conflict territory is not demilitarized as much as possible, remains unprotected from arms supplies from neighboring Russia and open to the penetration of fighters across the unprotected border.

In order to meet the minimum requirements, parties and candidates must also have security guarantees that can only be provided to citizens with full border control. At the same time, the OSCE should be involved not only as observers but also in election commissions in order to guarantee transparency and independence of the process.

The frontier for democracy and for Europe

Demilitarization of the territory is important not only in the context of elections, but also in order to build up other democratic processes in a post-conflict society.

After all, effective disarmament in the Donbass can only happen if the state or international mission controls the border , which will prevent the transfer of weapons from Russia.

With the resumption of the work of the Ukrainian border crossing points, the penetration of fighters from the neighboring state, which together with the “humanitarian aid”, constitute the main resource by which Russia destabilizes the situation in the Donbass, should stop. By the way, on December 19, 2019, the Ukrainian-Russian border crossed the ninety-fourth humanitarian convoy from the Russian Federation.

This statement is also proven by international experience.

Following the intensification of the demarcation line between India and Pakistan in Kashmir and the creation of a de facto border of the defense structure in 2004, the number of persons invading the Indian-controlled part of Kashmir for the purpose of committing attacks has decreased by 80%. Certainly, a closed border should not be considered a panacea, which confirms the experience of the same Kashmir, but the volume of movement of armed persons and the circulation of arms with neighboring states changes these measures radically.

Another example of how constant border surveillance and control contribute to improving the security situation is Northern Ireland’s history. During the active phase of the conflict, known as  The Troubles, establishing full control at the border between Northern and Southern Ireland has significantly reduced the level of violence and stabilized the situation.

Disarmament must be carried out at the same time with the strengthening of border control.

Control over the border areas by itself does not stop the circulation of weapons, which for five years fell into the hands of residents of Donbass from Russia. And here it is important that Ukraine does not repeat the experience of Moldova, which since the beginning of the 1990s could not achieve that the Transnistrian territory was abandoned by Russian troops and disarmament took place.

On the issue of border control, Ukraine has an argument that can count on the support of the West, as the uncontrolled arms trade between the uncontrolled governmental regions of Ukraine and Russia may extend far beyond the borders of the two countries.

Europe already has the experience to prove it. Due to the fact that not all areas of the Albanian-Kosovo border were monitored by official or international observers, a large number of weapons that fell into the hands of Albanians during the 1997 riots ended up outside the Albanian state.

The sequence of actions in the context of border control and local elections in the Donbass is a major stumbling block in the “Norman talks” between Ukraine and Russia. And although Putin insists that the elections take place in a situation where Ukraine does not control border areas, this item of the 2015 Minsk Accords needs to be revised .

World experience proves that the scenario offered by Russia will not allow a stable settlement of the conflict and will even threaten its escalation and the spread of security problems. And recognizing the choices made in such an environment remains a big question.

Moreover, as a result, Ukraine may not gain control of the border even if it agrees to hold elections in such circumstances.

And although Russia does not show good will to end its aggressive policies at all, Ukraine must be prepared for a long negotiation process in which the issue is a red line that cannot, in principle, be moved.