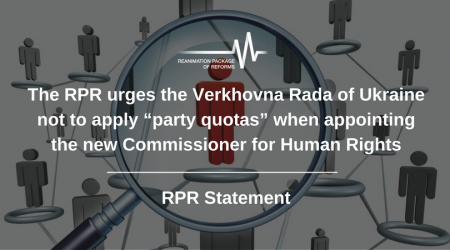 The Reanimation Package of Reforms calls upon the Parliament of Ukraine to ensure an open and independent competition for the post of the Ombudsman of the Verkhovna Rada of Ukraine in compliance with internationally recognized standards of transparency, impartiality and involvement of civil society.

On April 25, 2017, the term of office of the Ombudsman Valeriya Lutkovska came to an end, and the process of nominating new candidates for the position of the Commissioner for Human Rights of the Verkhovna Rada of Ukraine started.

Although the right to nominate candidates for the post of the Ombudsman belongs exclusively to the MPs, according to the law the Ombudsman shall operate independently of other government agencies and officials. What is more, the Ombudsman continues to exercise his/her powers, regardless of the expiration of the term of authority of the Verkhovna Rada of Ukraine.

According to the Paris Principles of the United Nations adopted by the General Assembly resolution of December 20, 1993, the nomination of candidates for the post of the Ombudsman should be in compliance with the necessary guarantees of pluralistic representation of civil society, including through the participation of non-governmental organizations dealing with human rights and countering racial discrimination, trade unions, relevant social and professional organizations. This mechanism is the key to ensuring the independence of institutions responsible for protecting human rights and makes their functioning free from political influence.

On May 24, the Verkhovna Rada Committee on Human Rights held a meeting to consider three candidates for the post of the Ombudsman, i.e. MP Serhii Alieksieiev (from the BPP), MP Liudmyla Denysova (from the People’s Front) and lawyer Oleksandr Mamalyha (from the Radical Party), concluding that they were suitable for the position. In the nearest future, these nominations can be submitted for a vote in the Parliament.

The Ukrainian legislation does not give any reason to believe that the Commissioner should be elected by the “party quotas”. Moreover, this approach contradicts one of the key principles of the activity of the Ombudsman – independence.

The Reanimation Package of Reforms supports the position of the European network of national human rights institutions and Ukrainian human rights defenders and emphasizes that the election of the Ombudsman from among politicians is unacceptable in a democratic society.

Given the critical importance of the Ombudsman for human rights in Ukraine, the RPR also urges MPs not to vote for politically committed candidates, whose election could significantly reduce the credibility of this institution for the public.