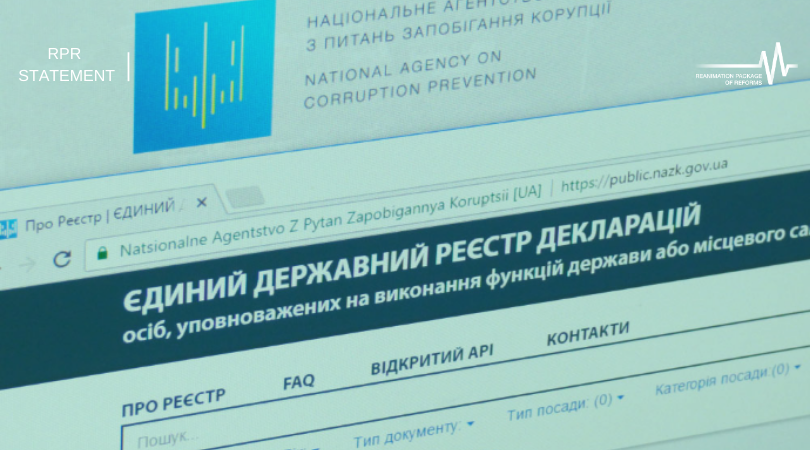 The implementation of electronic declaration of property and wealth for officials and politicians, as well as legal liability for intentional violations of the law on its declaration, has become one of the key civil society achievements in anti-corruption reform after the Revolution of Dignity.

The adoption of the new version of the Law on Prevention of Corruption that obliged officials and politicians to submit e-declarations to the National Agency on Corruption Prevention (NACP) ensured all the necessary legal means for NACP to upload those declarations on a single web portal and verify all information mentioned in them. At the same time, Article 366¹ of the Criminal Code of Ukraine introduced criminal liability for intentional failure to submit a declaration or providing knowingly false information into the declaration, which also contributed to the fair implementation of the law.

However, the decision of the Constitutional Court of Ukraine from 27 October 2020 at the request of 47 deputies – representatives of the parliamentary groups “Opposition Platform – For Life” and “For the Future” – effectively blocked the work of NACP anti-corruption units, deprived them from powers to control and verify declarations, to have open round-the-clock access to the declarations’ registry, to undertake lifestyle monitoring, and to conduct other important anti-corruption activities. Furthermore, legal liability for failure to file a declaration and provide false information in the declaration has also been abolished.

All that undermines most of the achievements of the anti-corruption reform. Ukraine cannot have a situation when the corporate interests of certain categories of state officials, judges, and politicians stand above the interests of the citizens and the state. Concealing the information about the property owned by people empowered by law in the areas of governance or the judiciary from the public makes them vulnerable to corruption temptations, and thus, destroys trust in state institutions and the state as a whole. Such irresponsible decisions of the Constitutional Court have already resulted in significant financial and reputational losses for Ukraine.

Only the Parliament has the authority to unblock the functioning of the NACP by passing the new law. President of Ukraine Volodymyr Zelensky has already publicly promised to exercise his right of legislative initiative if the CCU decides to abolish e-declarations.

The Reanimation Package of Reforms Coalition calls for: