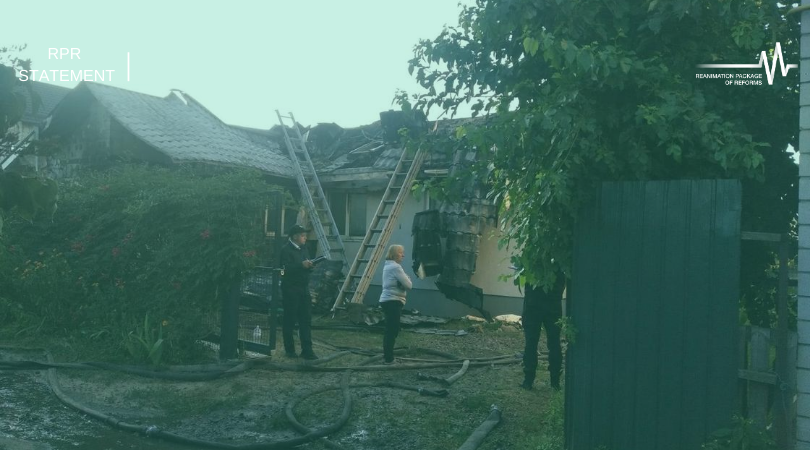 On the night of July 23, the house of Vitaliy Shabunin, head of the Anti-Corruption Action Center, a non-governmental organization that consistently fights against corruption and supports the formation of effective anti-corruption institutions, was set on fire. There is every reason to classify such a crime not only as intentional damage to another’s property by arson, which caused large-scale damage but also as attempted murder because at that time the house was Vitaliy’s parents.

Unfortunately, most of these attacks are not properly investigated by law enforcement bodies, and their perpetrators go unpunished. This is evidenced in particular by the investigation into the horrific murder of Kateryna Handziuk, which has not yet been completed. Moreover, as can be seen from the open criminal proceedings against Vitaliy Shabunin, Serhiy Sternenko and others, the activists themselves may become suspects on the initiative of law enforcement bodies.

Attacks on civil society activists for their public position, which may contradict the position of the authorities, are a direct attack on the rule of law and democracy in Ukraine. Discrediting and harassing the non-government sector, numerous legislative initiatives in the current Parliament aimed at restricting the freedom of association of citizens, are real steps towards establishing an authoritarian regime in Ukraine, under which none of the citizens will have real rights guaranteed by the Constitution and will not feel safe.

We are forced to state that the tendency to intensify the persecution of public activists and pressure on civil society representatives, which began in 2016, remains unchanged even now, despite the election of a new President and Parliament.

The RPR coalition calls on law enforcement agencies – the National Police and the Prosecutor General’s Office – to immediately investigate the arson of Vitaliy Shabunin’s house and the attacks on other public activists and to punish their customers and perpetrators.