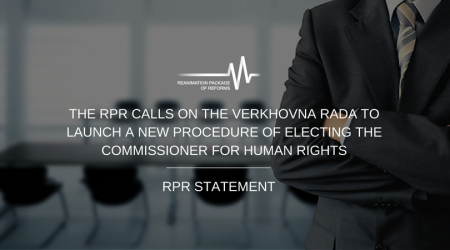 The deadline for the Verkhovna Rada of Ukraine to select the Commissioner for human rights, established by the Ukrainian law, passed on June 6. Voting for the Ombudsman after June 6 by the MPs will violate Article 6 of the Law “On the Verkhovna Rada Ombudsman”. The document clearly states that the voting shall take place within 20 days since the procedure was launched. June 6, 2017 marked the last day for this.

On April 25, 2017, the term of authorities of the Commissioner for human rights Valeria Lutkovska expired and the process of nominating new candidates to the office of the Verkhovna Rada Ombudsperson started. On May 24, the VRU Committee on Human Rights considered the issue of whether the three candidates for this office – MP Serhiy Alieksieyev (Petro Poroshenko Bloc), MP Liudmyla Denysova (Narodnyi Front), and attorney Oleksandr Mamalyha (Radical Party) match the requirements, and issued a positive conclusion. Yet, the voting was not held by the established deadline.

Therefore, the Reanimation Package of Reforms calls on the Verkhovna Rada of Ukraine to reboot the procedure of electing the Ombudsperson and to launch another 20-day period for a new nomination of candidates on June 7.

It should be noted that according to the Paris Principles of the United Nations, laid down by the Resolution of the United Nations General Assembly on December 20, 1993, candidates for the Ombudsperson shall be nominated in line with all the guarantees ensuring pluralistic representation of the civil society. This mechanism guarantees independence of the institution responsible for human rights protection and makes the process free from political influence.

Moreover, given the previous statement of the RPR, we call on the Verkhovna Rada of Ukraine to initiate a competitive selection of the candidates for the position of the Commissioner for human rights. With the purpose to implement the Paris Principles of the UN, we ask the Parliament to entrust the carrying of this competition to the representatives of the human rights organizations, respected and recognized by the civil society.