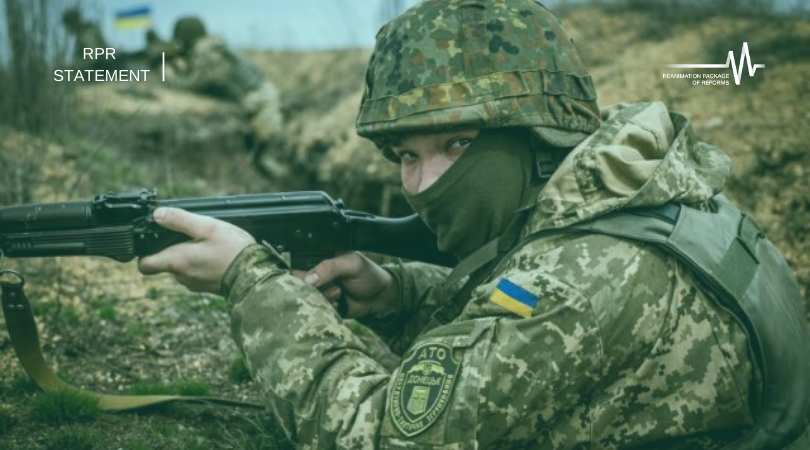 The Public Warns Against “Traps” in Donbas Peace Negotiations

The events of recent weeks surrounding attempts to resolve the Donbas conflict have stirred up Ukrainian society. Persistent attempts to withdraw forces and troops, preparation for the Normandy format meeting and compliance with Russia’s requirements for this meeting, lack of clarification from the authorities on the Steinmeier’s formula and overall peace negotiation strategy create an atmosphere of mistrust, tension and expectations that peace will be achieved through concessions on the part of Ukraine.

We, the representatives of the expert and civic community, appreciate the efforts of President Volodymyr Zelenskyi to move things forward with the negotiation process. Among other things, we share the commitment to achieving a stable silence regime and ending combat along the demarcation line. At the same time, we draw attention to the obvious and hidden risks and dangers that we see in this situation. We believe that this will help avoid the Russian “traps” during the negotiations, as well as relieve internal tension in the Ukrainian society.

The President and his team stress that no elections will be held without the withdrawal of Russian troops, disarmament and border control. But it is still not clear: how exactly do the authorities see the implementation of these security steps in practice? Who will arrange, control and acknowledge the demilitarization and withdrawal of troops? Why have we stopped promoting the idea of UN peacekeepers, who, unlike the OSCE, will have a real opportunity to create a secure environment? Actually, this is these specific tools that we have to talk about. And we also need to insist that without clearly stated guarantees and mechanisms we will not be able to consider the de-occupation complete. Even if attempts to withdraw troops are confronted with Russia’s statements about the inability to guarantee anything – can we take Russia’s word for it in the issue of large-scale demilitarization?

Election is not the key topic

Although Steinmeier’s formula is not an automatic “betrayal” or “surrender”, it poses a serious risk that preparation for future elections in the occupied territories will be a central theme in the Normandy format and Minsk negotiations. Thus, through formal approval, we give Russia the upper hand to focus on the election and the enactment of the law on the so-called “special status”, rather than on everything that must precede the election.

Ukraine’s task in this situation is not to allow our negotiation group to get involved in the discussion of only one issue – elections. Of particular concern is the fact that the letter of approval of the Steinmeier’s formula first recorded: a separate, special law must be adopted for elections in the occupied territory. How did this position emerge in the negotiations? It is definitely not stated in the Minsk agreements. Why should these elections be governed by a new, separate law, rather than current electoral law? We predict that Russia will be investing heavily in this, demanding “special” rules for elections in the occupied territories. In particular, it will require that the Ukrainian authorities, strictly necessary for legitimate elections, not fully operate in the occupied territory at the time of the elections. This may be about preventing the CEC, the National Police, the courts and the State Treasury from arranging the election process.

The withdrawal of troops is not an end in itself

The forces and troops withdrawal initiative must meet specific goals, otherwise this is not justified.

On the one hand, withdrawal is understandable, for example, if there is a humanitarian purpose. That is why the situation in Stanytsia Luhanska is understandable – it is necessary to build a bridge there although the aggressor did not meet the withdrawal conditions there. For the same reasons, if we start withdrawal in Zolote, we should do so only in exchange for the opening of the checkpoint by the militants and a similar full-scale withdrawal of troops. Instead, we see the intention to withdraw troops at any cost, without any other party’s guarantees, which the general public does not understand. The withdrawal of troops 1-2 km off the defended sites to the undefended sites does not improve the safety of the military, since major casualties are due to long distance mortar and artillery fire.

On the other hand, withdrawal is justified when it is part of a broad roadmap to demilitarize the region. If such a map is agreed upon in the Normandy format, the withdrawal may become the first step. Today, there are no such prospects, and the very motivation for artificially creating new gray areas seems unconvincing.

Citizens’ safety in the frontline area is our priority

Attempts to withdraw forces in Stanytsia Luhanska revealed a key problem – the state failed to guarantee the safety of its citizens in the area abandoned by the military.  Ukrainian police do not operate in this gray area. And before promising effective police operation on new withdrawal sections, it must be ensured in the first settlement – Stanytsia Luhanska. If we care about people first, we must guarantee the safety of Ukrainian patriots, volunteers and authorities, who have openly declared pro-Ukrainian positions for 5 years and now, not for nothing, consider themselves left behind in such gray areas. Discussions about quick peace and de facto unilateral withdrawal make the patriotic part of the local population in the frontline area think about leaving it for the reasons of personal safety. As a result, we run the risk of losing the most pro-Ukrainian and active part of Donbas.

We understand the complexity of peace building after 5 years of war. As international experience shows, there are no easy solutions, especially since Russia will do everything to further destabilize Ukraine. In these circumstances, any steps that may cause further controversy in Ukrainian society will only be to the benefit of Russia and weaken Ukraine’s position. That is why the above positions during the negotiation process will allow protecting the interests of Ukraine and its citizens as much as possible.

Center for the Liberation Movement Research