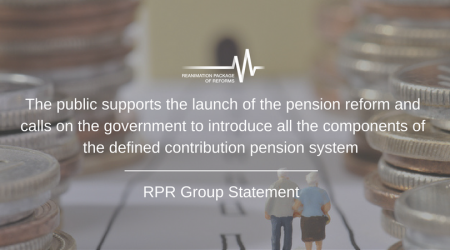 Experts of the Financial Sector and Pension System Reform group of the Reanimation Package of Reforms support the government initiative to reform the pay-as-you-go component of the pension system and call on the government and the parliament to continue their cooperation on the pension reform.

RPR experts approve of the regulation updating the first (pay-as-you-go) level incorporated in the government’s concept of the pension reform, in particular, with regard to the conditions of retirement, “modernization” of pensions, abolition of special pension preferences, mechanism of regular indexation of pensions, etc. However, they stress that it is full implementation of all the components of the defined contribution pension system that is key to the success of the reform as a whole.

Pension system shall include the following three levels equal in status and importance:

In view of the above, experts of the Financial Sector and Pension System Reform group of the Reanimation Package of Reforms call on the government and the Verkhovna Rada to consider the following recommendations in the course of further implementation of the pension reform: