Reanimation package of reforms > News > Events > The public has presented the priority tasks for 2017. Follow-up report on the Forum “Priorities of the Year of Reforms: To Accelerate the Pace, to Guarantee Stability” 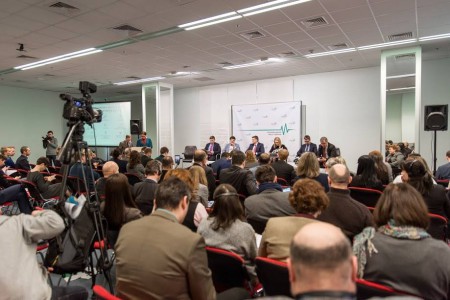 The public has presented the priority tasks for 2017. Follow-up report on the Forum “Priorities of the Year of Reforms: To Accelerate the Pace, to Guarantee Stability”

In the beginning of a new political season, the RPR coalition has presented the top-priority tasks for the Government and the Parliament of Ukraine for 2017. The Reanimation Package of Reforms has gathered together MPs, government members, representatives of the Presidential administration and international organizations, leading experts, and journalists at the Forum “Priorities of the Year of Reforms: To Accelerate the Pace, to Guarantee Stability” to discuss key reformist plans and the issues of pace and stability of the state-building changes in the country.

Hugues Mingarelli, Head of the Delegation of the European Union to Ukraine, opened the Forum, saying that civil society is one of the largest and most valuable assets of Ukraine. He also called for keeping in mind the sustainability of changes in progress. “Over the last three years, two Ukrainian governments have taken more steps towards transformation, than we have seen for the last 23 years. There reforms pertain to both political life, and economic modernization. However, the very fact that the reforms are taking place, does not mean that this progress is irreversible. There might always be a rollback… Therefore, we have to remember about the sustainability of reforms,” stressed Hugues Mingarelli.

For the changes to be sustainable, the rule of a golden triangle should be observed, believes Yaroslav Yurchyshyn, co-chair of the RPR Board, executive director of Transparency International Ukraine.

“There is a golden triangle of partnership which can ensure both proper pace, and irreversibility. It includes public interest in the reforms, support of these reforms by the businesses, and the presence of reformists in the authority ready to implement them. We also have the fourth angle – our international partners… However, we are the owners of these reforms, not our partners. Therefore, it is up to us how to implement them and what priorities to set,” added Yaroslav Yurchyshyn.

Taras Shevchenko, co-chair of the RPR Board, director of the Center for Democracy and Rule of Law, presented nine priorities for 2017 identified by the RPR coalition.

“2017 is a year when the chances for positive changes in different spheres are still high, but the window of opportunities is shutting. We still prioritize adoption of new laws, but pay greater attention to their implementation. Establishment of new institutions is critical for the changes in the country. We have heavily concentrated on these new institutions in our plans for 2017,” said Taras Shevchenko.

The RPR coalition has identified the following key tasks for 2017:

1) Establishing a system of independent anticorruption courts;
2) A new Supreme Court;
3) Reforming ministries (state secretaries, reorganization of the secretariat, strategic planning);
4) Introduction of a proportional election system in the process of parliamentary election;
5) Unblocking the land market in Ukraine;
6) Ensuring sustainable development of territorial communities;
7) Establishing and ensuring proper financing of a public broadcaster;
8 ) Energy market and increase of energy efficiency of the housing sector;
9) Approving a guaranteed level/package of healthcare. Not only priorities have been presented at the Forum: the results of the public opinion poll on the success of the reforms have also been presented. Iryna Bekeshkina, member of the RPR Board, director of the Ilko Kucheriv Democratic Initiatives Foundation, said that on a five-point scale, the experts assessed the progress of reforms at 2,52. It means that the fight between the old and the new Ukraine is still going on. “We asked the experts to identify five most successful reforms. These turned out to be: ProZorro system, electronic declaration, the establishment of the National Police, the new anticorruption agencies, and decentralization. They have also identified five major failures: judicial reform, reform of the internal affairs agencies, civil service reform, tax reform, and anticorruption reform. If we compare the achievements and the failures, we can say that the achievements look like separate battles. Strategic areas are still full of failures”, summarized Iryna Bekeshkina. (Please follow this link to see the results of the survey). Moreover, the public opinion poll has demonstrated that the society lacks high-quality communication of the reforms. Dmytro Shymkiv, deputy head of the Presidential Administration of Ukraine in charge of administrative, social, and economic reforms, secretary of the National Reforms Council, has agreed with it. He said that this is one of those areas which should consolidate the authorities and the public.

“The issue of communication is critical. Yet, the communication of most of the reforms is not interesting for the public. All of us have a task to make it interesting. In order to achieve results, we need to communicate the process itself, since on every stage – and this is an important achievement of the Reanimation Package of Reforms – we have to understand how the process is going on, how to unite the stakeholders and bring together those who are ready to make changes,” said Dmytro Shymkiv.

Representatives of the public have pointed out that a number of tasks extensively communicated by the activists and public members have not been implemented by the authorities. Viktor Taran, member of the RPR Board, director of the Center for Political Studies and Analysis “Eidos”, talked about the government’s debts to the society.

“If you look at the coalition agreement, you will see two problems: either the laws have not been adopted or their implementation is inadequate. At least half of the coalition agreement has not been realized. The laws which we expect to be adopted soon are the following. First, the law on parliamentary election under an open ballot system that would provide a mechanism of competition between the candidates. Second, amendments in the law on the referendum, because the law adopted in the times of presidency of Yanukovych rules out any objective results, as it enables the authorities to influence the outcome. And third – reforming the Central Election Commission,” said Viktor Taran.

He also stressed that positive developments in the reform of justice, healthcare, land and pension reforms, and energy reform are highly anticipated this year.

Representatives of the authorities have agreed with most of the priorities identified by the public. However MP Artur Herasymov, representative of the President in the Verkhovna Rada of Ukraine, stressed that one of the key problems is populism.

“One of the real problems in the country is widespread populism. It is important for the government that the civil society should help us to raise public awareness on how the reforms are implemented. It is impossible to do everything at once, so any help with fighting populism will be greatly appreciated,” said Artur Herasymov.

At the same time, Oleksandr Sushko, RPR Board member, scientific director of the Institute for Euro-Atlantic Cooperation, believes that the greatest threat is a potential rollback of the reforms.

“It is not a tragedy that the reform is delayed – there is a much greater problem when the reform is launched and is being implemented, and then fails. Because in that case it is much more difficult to mobilize people for the repeated launch of the reform. And we might face exactly that in the nearest future. We need to learn how to defend those islands of reforms that we have already reached, because this is not the mainland yet. Now we have to ensure the sustainability of public participation at the existing level, and guarantee not a wave, but a permanent culture of civic participation to ensure success in the long term,” said Oleksandr Sushko. Tetiana Kovtun, deputy state secretary of the Cabinet of Ministers of Ukraine, calls for systemically changing the approach to the implementation of reforms which currently prevails in the governmental institutions.

“The process goes like this: there is some partnership, the civil society is preparing draft laws, the parliament shall adopt the laws or regulations of the Cabinet of Ministers, while the bureaucratic institutions shall implement them. But it is not as simple as it sounds. Draft laws are not always solutions to the problems in the society. The problem is that there is neither high-quality policy analysis nor priorities, while the Cabinet of Ministers is working entirely “bottom up” performing some old tasks. Therefore, we can throw draft laws at the government like tennis balls, but first the system of work should change. And for this reason I believe in the institution of state secretaries,” said Tetiana Kovtun.

The data on how the reform index iMoRe from VoxUkraine has been changing was also presented at the Forum. Hlib Vyshlinskyi, member of the RPR Board, executive director of the Center for Economic Strategy, said that in the first half of 2016, when new government was appointed in Ukraine, actions were taken to facilitate a visa-free regime and cooperation with the IMF. In that period iMoRe totaled 1. In the second half of 2016 it dropped to 0,8, while the average score for the past year was 0,9. In the first two weeks of 2017, the index score totaled 0, which means that there was not a single reformist step to be assessed by the expert group. In the next two weeks the score increased to 0,4.

“As far as the pace of reforms is concerned, we obviously have problems here – such a score means slowdown of the reforms. iMoRe shows that the most significant reforms have been pushed only by the requirements of the IMF and the EU. Readiness of the Ukrainian authorities to fulfill these requirements is motivated by the external debt of Ukraine and the imbalance largely inherited from the previous government. It is not clear yet whether it is good or bad: but for this imbalance we would not know if there have been any structural changes which did really happen over the last three years,” summed up Hlib Vyshlinskyi.

The participants of the discussion have agreed that to implement fast-paced, sustainable, and high-quality reforms, it is necessary to consolidate the efforts of the government and the public and to monitor not only adoption of particular legislative acts, but also their implementation.