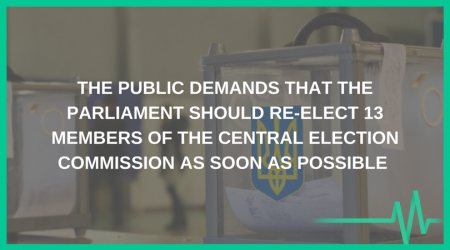 The Parliament should re-elect 13 members of the Central Election Commission as soon as possible. The civil society and the political players from different branches of power still have a chance to restore trust in the central agency administering electoral processes in the country and, as a result, in the institute of election as such.

Over the past three years, the Verkhovna Rada of Ukraine and the President have been unable to implement an effective legal mechanism to reboot the Central Election Commission, which leads to a conclusion that the present-day situation and vain half-actions are acceptable for all the stakeholders. It is very dangerous to keep the Central Election Commission in the state of permanent tension and simultaneously demotivate its members against systemic work, reform of the electoral law, or internal transformations.

There are no barriers to re-electing the Central Election Commission – no parliamentary, presidential, or large-scale local election is coming. At the same time, the fact that the National Anticorruption Bureau of Ukraine served the Head of the Central Election Commission with notification of suspicion is a valid reason for the VRU and the President to speed up the search for a compromise among the candidates to the commission.

NGOs would like to remind you that the list of 11 candidates, submitted by President Petro Poroshenko in June 2016, is not perfect, as it fails to present the entire range of parliamentary factions, half of which are left without a quota. The Code of Good Practice in Electoral Matters of the Venice Commission states that independence of electoral collegiate bodies can be ensured only through representation of interests of different political factions and groups in the election commissions. Moreover, two offices are still vacant. Therefore, it is high time the list should be revised and the changes should be made to ensure parliamentary voting in the nearest future.

NGOs would like to address all the factions to submit the updated list with the proposed candidates to the President. It is essential not only to reach a consensus in the issue of re-election of the Central Election Commission members, but also to propose the candidates meeting the following key criteria: 1) impeccable reputation; 2) competence; 3) political neutrality and independence.

A well-balanced and effective composition of the Central Election Commission should restore trust in this agency and ensure fair and democratic election in the future. Each party and political group – be it in power, or in the opposition – should remember that the political landscape changes, while a responsible and independent administration agency prevents any manipulations or use of administrative resources, regardless of who tries to do it.

The Reanimation Package of Reforms group on the electoral law reform