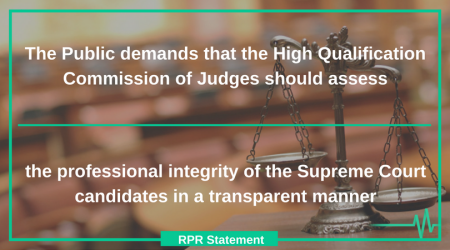 The competition to the new Supreme Court is drawing to a close. Not only the names of those to join the highest court, but also the fate of the judicial reform as such will be determined in a few weeks.

On May 26, the last interviews with the candidates will be conducted. In the follow-up, the High Qualification Commission of Judges (HQCJ) can award up to 790 points out of 1,000 to the candidates. It is this stage that will determine who will become the judge of the new Supreme Court.

One of the criteria for taking up the office of a judge, as set by the Constitution of Ukraine, is professional integrity. According to the law, candidates’ integrity shall be verified by the HQCJ in partnership with the Public Integrity Council.

However, in the follow-up of the first interviews, the HQCJ has turned the blind eye to 42 negative conclusions out of 55. Most of those candidates could not explain the origin of their property or disprove other evidences of unfair practice.

All the candidates not matching the criteria of good practice and professional integrity might be appointed as judges of the Supreme Court. It may happen if at least 11 HQCJ members out of 16 vote in favor of overriding the PIC conclusions at the plenary meeting.

According to the recent decision of the HQCJ, this will be a vote in secret. It means that the public will not know who of the HQCJ members has voted in favor or against the appointment of dubious candidates as judges of the Supreme Court. This means that there is a great risk that undesirable decisions might be adopted.

In addition, the HQCJ can cover up the candidates’ ranking in the follow-up of the interviews and tests. The public will not know whether those dubious candidates who received negative conclusions of the Public Integrity Council have a chance to be appointed to the Supreme Court.

Therefore, the final decision on who will become a judge of the Supreme Court will be adopted behind the closed doors. Despite the public demands, the procedure for assessing the interviews stays non-regulated, while the decision-making process is secret.

We would like to remind you that the assessment of written tasks of the Supreme Court candidates have already raised suspicion of manipulation on part of the HQCJ. Despite this fact, the Commission refuses to publish the written works and the assessment methodology to prove that its decisions are fair.

Thus, the public is convinced that the secrecy surrounding the selection of candidates on the last stage of the competition will create new possibilities for manipulation and political interference, and will result in political dependence of the new Supreme Court and complete loss of public trust in the judicial reform as such.

Therefore, non-governmental organizations demand that the HQCJ should ensure that professional integrity of the Supreme Court candidates is assessed in a transparent manner. To this end, the following action should be taken:

Timeline of the last stage of the Supreme Court competition – PDF Check-list of transparency requirements as demanded by the civil society – PDF.