Reanimation package of reforms > News > Statements > The public demands that the draft law No. 6220 killing the NABU should be rejected 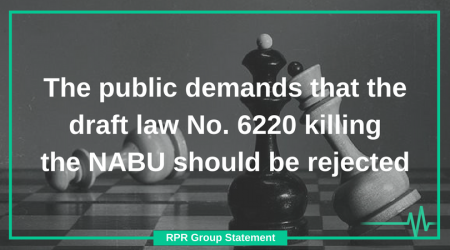 The public demands that the draft law No. 6220 killing the NABU should be rejected

Draft law No. 6220 “On amendments to the Code of Criminal Procedure of Ukraine on entering information to the Unified Register of Pre-trial Investigations and the grounds for terminating criminal proceedings”, which is to be considered in the second reading on May 18, jeopardies the independence of the National Anticorruption Bureau of Ukraine.

The draft law would allow to deliberately terminate any proceedings conducted by the NABU to the benefit of high-ranking corrupt officials.

The draft laws prohibits instituting new criminal proceedings and obligates any investigative agency to terminate any proceedings if the investigation under the similar circumstances was terminated by any agency in charge of pre-trial investigations.

Due to these regulations, the non-reformed law enforcement agencies, in particular, the Prosecutor’s General Office and the Security Service of Ukraine, will get a new instrument to prevent the NABU from investigation. If any of them institutes and then, having imitated the investigation, terminates the proceedings concerning any circumstances related to the corrupt actions of the high-ranking officials, the NABU will be obliged to terminate its proceedings as well, or it will lose a chance to institute new proceedings.

In particular, adoption of this draft law jeopardizes NABU investigations regarding Yuriy Ivaniushchenko, Roman Nasirov, Oleksandr Onyshchenko, and others.

Draft law No. 6220 cancels out the requirements of the Code of Criminal Procedure of Ukraine regarding the investigative jurisdiction of NABU, which was one of the conditions of the introduction of visa-free regime between Ukraine and the EU and provision of financial assistance from the International Monetary Foundation.  We would like to remind you that last year at least four draft laws, which should have given the prosecutor’s office the right to evade the legal requirements concerning exclusive investigative jurisdiction of the NABU over the crimes of corruption committed by the high-ranking officials, were registered in the parliament. Each of those draft laws was criticized by the international partners and the public.

We would like to stress that despite the claims of the authors of that draft law, the proposed regulations will not be able to protect businesses from illegitimate pressure on the part of the law enforcement agencies. The corrupted prosecutors and investigators will be able to decide at their own discretion whether the circumstances under which the case against some company is framed up are equal to the circumstances of the case is already terminated. It means that they will be able to manipulate the criminal proceedings to pressurize the businesses.

Taking this into consideration, the experts of the RPR Anticorruption Group call on the Verkhovna Rada to reject the draft law No. 6220 “On amendments to the Code of Criminal Procedure of Ukraine on entering information to the Unified Register of Pre-trial Investigations and the grounds for terminating criminal proceedings”.