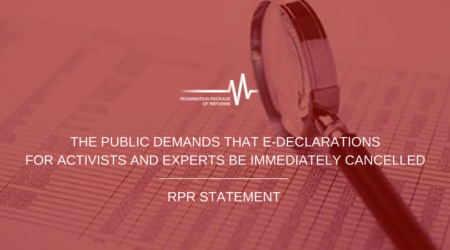 On April 1, the next scheduled stage of electronic declarations submission by the persons authorized to perform state functions expires. Amendments to the Law of Ukraine “On Prevention of Corruption”, adopted in spring 2017, put the representatives of anti-corruption non-governmental organizations, experts and other persons who receive direct or indirect funding as part of international technical assistance on the list of persons required to submit respective electronic declarations. The new provisions contradict the principle of legal certainty, which is part of the rule of law and is discriminatory in terms of its content.

Civil society, human rights organizations and the international community have been demanding that Ukrainian authorities, in particular the Verkhovna Rada, cancel these discriminatory and anti-democratic changes for almost a year.

The requirement to cancel declarations for civic activists is included in this year’s priorities of the G7 Ambassadors to support Ukraine. The European Union has also repeatedly called for the abolition of the relevant regulations; the last time it was emphasized by Federica Mogherini during her visit to Ukraine.

In addition, GRECO and OECD experts recommended lifting the obligation to file electronic declarations for civic activists. In its report, GRECO noted the discriminatory nature of the abovementioned regulations and their focus on “intimidating” activists.

On July 10, 2017, the President of Ukraine introduced draft laws No. 6674 and No. 6675 for consideration by the Verkhovna Rada; they provide for the abolition of electronic declaration for activists, but at the same time, substantially broaden reporting obligations for non-government organizations.

On March 16 this year, the Venice Commission, together with OSCE/ODIHR, issued an opinion on these draft laws. International experts criticized respective draft laws and noted “the critical importance of the electronic declaration requirements for anti-corruption activists being canceled by April 1, 2018”.

It is still possible to abolish discriminatory regulations by April 1 this year by adopting draft law 6271, which lifts the obligation to submit electronic declarations without introducing additional reporting for public associations. Moreover, it is also important to abolish the obligation to file electronic declarations for foreign citizens in the supervisory boards of state-owned enterprises.

March 22 is the last day when the Verkhovna Rada can cancel the said declaration requirements. It is critical that respective amendments to the Law “On Prevention of Corruption” come into force before April 1 this year, and a positive vote on draft law 6271 as a whole this plenary week (March 19-23) is the only option.

Representatives of civic, anti-corruption and human rights organizations call on: