Reanimation package of reforms > News > Statements > The Public Calls on the Verkhovna Rada to Amend the Codes of Procedure in Line with the Parliamentary Procedure, Improving the Mechanism of Judges Selection 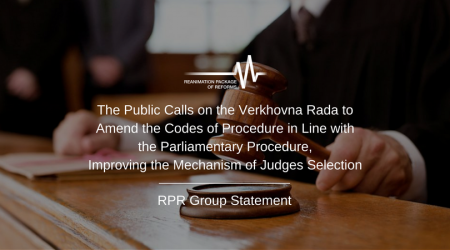 The Public Calls on the Verkhovna Rada to Amend the Codes of Procedure in Line with the Parliamentary Procedure, Improving the Mechanism of Judges Selection

To amend the codes of procedure is one of the key tasks of the judicial reform. It should not only introduce a range of new procedural regulations, but also ensure effective activity of the new Supreme Court.

At the same time, potential adoption of these amendments “as a basis and as a whole” paves way for the behind-the-scenes political arrangements which might affect the process of selection of Supreme Court judges. Therefore, it is important to consider the codes of procedure according to the full procedure, as this will allow to review and incorporate amendments in a democratic manner.

Moreover, the public demands to ensure transparency and impartiality of the competitive selection of judges have been ignored for a long time. The competition to the new Supreme Court has been accompanied with scandals and controversies which the responsible agencies refuse to explain or correct. The conclusions of the Public Integrity Council are usually easily overruled by the majority of votes of the High Qualification Commission of Judges.

The draft law on amendments to the Law “On the judiciary and the status of judges” No. 6363 aims to improve this situation on the legislative level. According to this draft law, the rating of the candidates running for judges, their written assignments, and the information about the voting of the High Qualification Commission of Judges shall be made public, as repeatedly demanded by the Reanimation Package of Reforms and the Public Integrity Council. To ensure that selection of the Supreme Court and other judges is fair, this draft law should be supplemented with the regulations raising the threshold to overrule the conclusions of the Public Integrity Council and making it obligatory to publish the results of voting to override those conclusions, as well as the scores given by each member of the selection panel.

Therefore, the Judicial Group of the Reanimation Package of Reforms demands that the Verkhovna Rada should adopt the following draft laws in line with the parliamentary procedure: