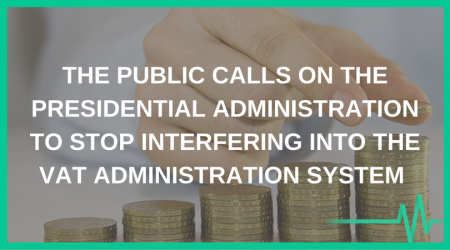 On April 19, 2017, the State Fiscal Service of Ukraine on demand of the Administration of the President of Ukraine (hereinafter APU) provided access to the system of full-cycle VAT administration – the register of VAT refund applications, the unified register of tax invoices, and the system of VAT e-administration – to the APU employees. As a result, the APU has received access to the information about tax payers’ banking accounts, tax invoices, transaction details, information which might be qualified as commercial secret, and personal information of taxpayers which according to the legislation shall not be disclosed to third parties.

The APU demands are groundless and contradict the constitutional principle of separation of power in a parliamentary-presidential republic. If the system access is requested by the APU “to ensure transparent monitoring and analysis” of the VAT administration system, as declared in the relevant letter of the APU to the SFS, it would be sufficient for the APU to utilize the access to the public register of VAT refund which is already open to the public.

However, if the APU is interested in receiving access to the data related to the VAT administration (which is a wider concept than the access to the VAT refund register), it is a direct violation of item 2 of article 19 of the Constitution of Ukraine. According to the said provision, government authorities and local self-government bodies shall act exclusively on the grounds, within the powers, and in the manner stipulated by the Constitution and the laws of Ukraine. The APU has no powers in the field of monitoring and analysis of VAT administration and, therefore, according to the constitutional principle of restriction of discretionary powers of government authorities shall not perform these functions.

The Unified Register of Automated VAT Refund was launched on April 1, 2017, and was expected to become a powerful means of de-shadowing the Ukrainian economy. Since this register is public – any and all interested government authorities, general public, businesses, and the media have thereby received effective tools for analyzing and identifying potential abuse in the area of VAT refund. Contrary to these expectations, after two weeks since its launch, automatic VAT administration system has fallen under a serious risk due to the APU unauthorized interference in its independent operation. As a result of this interference, there is a serious risk that taxpayers’ confidential information might be leaked, which in its turn poses a threat to the national security.

Experts of Taxation and Budgeting Group of the Reanimation Package of Reforms emphasize that there are no legal grounds for providing the APU with a special access to the register of VAT refund applications and other components of the VAT administration system. Therefore, the public calls on the Presidential Administration to cease interfering into the said system, and on the Ministry of Finance – to ensure its independence and security.