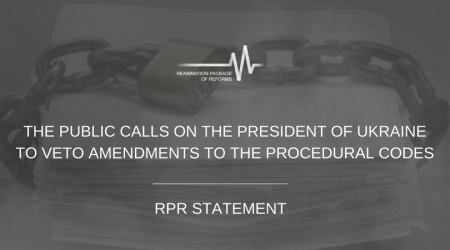 If signed by the President, this Law with its highly dangerous amendments to the Criminal Procedure Code may paralyze the whole judicial system of the country and become an obstacle to anti-corruption investigations and investigation of the ‘Maidan cases’.

This primarily relates to the following provisions:

Thus, all “Maidan cases” and cases against former state leaders that have not been referred to court will be immediately closed, since the terms for investigation set forth in the new law have long expired. Respective amendments will rule out the possibility of effective performance of all pre-trial investigation authorities, particularly the National Anti-Corruption Bureau of Ukraine (NABU), since they will not be able to duly conduct the majority of investigative activities, including surveillances, as they will be forced to haste the process. The number of refusals to initiate investigation of non-obvious crimes may also grow significantly, as investigators will not undertake investigating such crimes in the said terms and will refuse to register crime incident reports to avoid increasing the statistics of undetected crimes.

At the same time, only state specialized institutions will have the monopoly to conduct forensic investigations (amendments to article 2 of the Law of Ukraine “On Forensic Investigation”). This will result in a significant narrowing of the right to protection and the constitutional principle of competition between the parties.