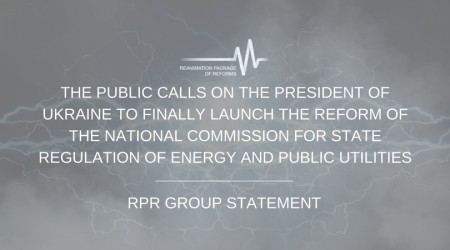 Experts of Energy Sector Reform group of the Reanimation Package of Reforms warn: the reform of the Regulator is already lagging several months behind. If the President, the Government and the Parliament of Ukraine fail to urgently form the Nomination Committee and to conduct the competition for the appointment of new members, in November the work of the Regulator will be suspended due to the lack of quorum. Expert community understands that the President may decide not to issue a Decree on the termination of the powers of the two members of the Regulator, or may temporarily extend their term of office in violation of the above said Law and his own Decree. However, in this case, the decisions of the old team of the Regulator will bear a high risk of cancellation by court decisions, since they will be adopted in violation of the legal procedure.

The new Law “On the National Commission for State Regulation of Energy and Public Utilities” was adopted almost a year ago and directly envisaged the formation of an independent energy regulator. The adoption of this law was one of the prerequisites for Ukraine to receive macro-financial assistance from the European Union in the amount of EUR 600 million. According to the law, the Nomination Committee was to be formed in the winter of 2017. In the spring of the same year, it was supposed to select the first two new members of the Regulator, and by November, two more had to be selected. To this date, only four of the seven members of the Regulator are valid. The expiration of the term of office for two more members in November will lead to the violation of the law by the Regulator and will, in fact, paralyze the Regulator’s activity.

As of today, despite the requirements of the Law, none of the five members of the Nomination Committee have been appointed:

Experts of Energy Sector Reform group of the Reanimation Package of Reforms emphasize: the establishment of the new, competent and impartial composition of the Regulator is a central precondition to the reform of energy markets, particularly electricity and gas markets. Conducting the necessary transformations in this sensitive area requires public trust to the institution responsible, among other things, for setting energy and utility tariffs. The absence of an independent arbitrator in the industry is a permanent source of conflict that will be used to discredit and disrupt the reforms. That is why the process of the establishment of the Regulator as well as its everyday activity and reputation should be impeccable. The same applies to the members of the Nomination Committee.

In view of the above, experts of Energy Sector Reform group of Reanimation Package of Reforms call on the President of Ukraine to make clear and decisive steps to identify the first two members of the Nomination Committee, thus launching the renewal of the Regulator and ensuring its full independence.