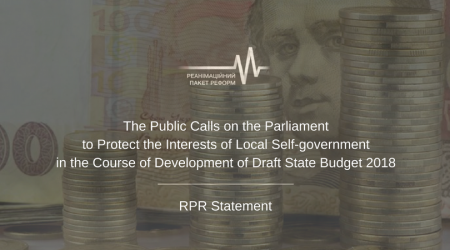 The Government has submitted to the Parliament of Ukraine proposed State Budget for 2018 supported with the package of legislative amendments, thus initiating a broad discussion on the budgetary framework. Local self-government reform and decentralisation of power are identified as the Government’s priorities. Endorsement of the State Budget for 2018 can either facilitate continuation of decentralisation and re-enforce the achievements of the recent years in running the reform, or nullify them, thus taking a step backward.

The analysis of the proposed amendments demonstrates significant risks for local self-governance in 2018.

The Law of Ukraine “On Voluntary Amalgamation of Territorial Communities” provides for the state financial support of voluntary amalgamation in village, settlement, town territorial communities through granting funds in the form of subventions for establishing relevant infrastructure to amalgamated communities. It is worth noticing that the current legislature does not define the techniques and criteria for estimating its total amount. The estimations were based on the amount of the first AH infrastructure subvention totalling to 1 bln. UAH for 159 AHs in 2016, where the average amount per one rural resident of these AHs was 1107 UAH.

Taking into account the limited financial resources and maintaining reasonable state support of AHs, the minimal estimated subvention for 2018 based on the subvention amount for 2017 per one rural resident, amounts to 764 UAH. Accordingly, the estimated funding for supporting AHs in 2018 should not be less than 2.5 bln. UAH.

Due to the burden on local budgets, the State Budget provides for an additional subsidy to cover the expenditures for maintaining educational and healthcare facilities, transferred from the State Budget, to the amount of 16.5 bln. UAH. However, this estimation includes only oblast budgets, with further distribution of funds by oblast state administrations. This undermines the principle of decentralisation, creates risks of corruption in the process of subsidy distribution, and makes local self-governments (AHs and towns of oblast significance) dependent of the oblast authorities.

The planned amount of the State Regional Development Fund is 8.1 bln. UAH, which constitutes 1% of the total revenue amount of the State Budget for the planned year. It is for the first time that the planned SRDF amount meets the requirements of Part 1, Article 24-1 of Ukraine’s Budget Code. However, as it has already happened before, the planned amount may be changed with significant portion of funds shifted to the subvention for social and economic development, where the distribution procedure is not transparent and is performed manually.

The draft law on amending the Budget Code of Ukraine (Draft Law # 7116 as of 15.09.2017) proposes to increase the percentage of funds withdrawn from the local budgets (reverse subsidy) from 50% to 80%, thus restricting fiscal development and discouraging local councils from increasing their budget revenues.

The draft law on amending the Budget Code of Ukraine (Articles 89, 91, 102 Of Draft Law # 7116 as of 15.09.2017) provides for handing over the expenditures of municipal services concession rates for certain groups of population, to local budgets. These expenditures are not supported with sufficient resources which were provided to the local budgets in the form of subvention to implement national social protection programs. This will result in additional burden for local budgets estimated to exceed 7 bln. UAH. Handing over of the expenditures related to the state’s social obligations to the level of local governments infringes on the principle of subsidiarity and restricts local self-government authorities.

The draft of the State Budget for 2018 proposes to hand over to local budgets the funding of higher educational establishments (accreditation levels I-II, 426 facilities – see Attachment 10 to the draft Law) with the total amount of 6.3 bln. UAH over to local budgets.  Transfer of spending powers without sufficient financial resources will result in local budget deficits, problems with financing of these facilities and worsening of the quality of higher education services.

The issue of funding vocational education at the level of towns – oblast capitals at the cost of relevant local budges also remains unsolved. Vocational education is the issue of the regional level, and the solution lies within the authority of oblast state administrations and oblast councils.

In distribution of budget transfers among the local budgets which have direct fiscal arrangements with the State Budget, the proposed State Budget for 2018 takes into account only 22 new AHs out of 47 where elections were held in April this year. The estimates also do not cover the AHs in which the elections will be held on 29 October 2017 (201 AHs) and in December 2017 (over 60 AHs). Failure to take into account the amount of budget transfers to newly formed AHs in the proposed State Budget may affect the process of decentralisation and cause mistrust in the reform.

The draft law proposes prolongation of the 13.44% excise tax on fuel produced in Ukraine and imported to Ukraine which was introduced on 1 January, 2017, to 2018-2019, to be credited to local budgets.

However, due to the changes in the mechanism of excise fuel tax allocation, local budgets failed to receive the funds in 2017, namely, there was a three months delay in funds receipt, resulting in late crediting of funds to the budgets (in July – September local budgets did not receive about 1.5 bln. UAH in due time).

The responsibility of covering the costs related to offering concession fares to certain groups of people was shifted to local budgets, which results in losses incurred by local self-governments and growing debts to service providers. The estimated losses incurred by local budgets in relation to the provision of services guaranteed by the Government, will be 2.5 bln. UAH.

The draft law on amending the Budget Code of Ukraine (Draft Law # 7116 as of 15.09.2017) proposes crediting the lottery license fee to State and local budgets (amendments to Articles 29, 64, 69). However, the draft law does not provide for crediting of this fee to the budgets of towns of oblast significance and AH budgets (provides only for the budget of the city of Kyiv, the budgets of the towns of rayon significance and settlements).

In this regard, the largest coalition of NGOs “Reform Reanimation Package” calls the Cabinet of Ministers of Ukraine and the Parliament of Ukraine for actions to prevent the negative consequences of 2018 State Budget for local self-governance, namely: