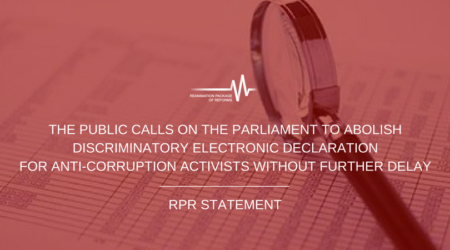 On January 1, 2018 another stage of electronic declaration by persons authorized to perform state functions began. According to the amendments to the Law of Ukraine “On Prevention of Corruption” adopted in the spring of 2017, public activists and citizens “engaged in the implementation of measures related to corruption prevention and counteraction” were also put on the list of persons authorized to perform state functions and obliged to submit respective electronic declarations. This provision can apply to any person who, for example, joined an anti-corruption rally against the authorities. However, there are no clear clarifications to the law, and criminal liability is stipulated for the failure to comply with the regulation.

This regulation was assessed by both the public and the international community as undemocratic and discriminatory. Such equating is illogical and unjustified. Moreover, unclear wording makes it impossible to establish the range of categories to whom this law applies. Poor quality and the lack of clarity in the law mean the lack of compliance with Article 11 of the European Convention on Human Rights and the rule of law principle guaranteed by the Constitution of Ukraine. It is the rule of law principle that requires for laws to be written with the precision which makes it possible to understand them. Vaguely worded laws are unconstitutional.

Back in autumn, in his speech to the Verkhovna Rada “On Ukraine’s Internal and External Situation in 2017” President of Ukraine Petro Poroshenko admitted that the introduction of electronic declaration for activists was “a common mistake.” He noted the need to revise respective provisions. Appeals for such a revision were also voiced by a number of Ukraine’s international partners, in particular G7 Ambassadors.

The public supports the President’s decision to ensure international-level expert evaluation of draft laws No.6674 and No.6675, which stipulate the abolition of electronic declaration for activists, but at the same time, contrary to the overall positive deregulation tendency, significantly expand reporting requirements for a selected range of non-government organizations. Civil society hopes that the Venice Commission’s recommendations expected in March 2018 will be taken into account.

The Verkhovna Rada of Ukraine has a number of draft laws aimed at abolishing electronic declaration for anti-corruption activists on its agenda for February 6th, 2018. Reanimation Package of Reforms calls on MPs to cancel electronic declaration for public activists without any further conditions on the basis of draft law No.6271, which, according to the results of the preferential voting, is supported by the majority of MPs.

Reanimation Package of Reforms also offers a platform that is equally spaced from any political interests in order to seek a consolidated solution and to achieve a practical result, which will testify Ukraine’s progress in eradicating corruption and supporting those who work towards this goal.