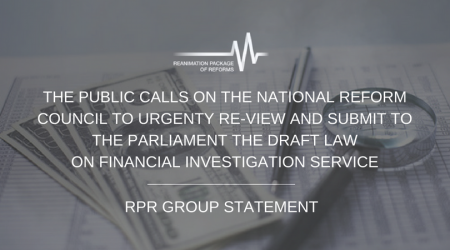 During the above mentioned meeting the Cabinet of Ministers approved the decision to send the draft law to the National Reform Council rather than its executive body. However, the Council did not hold any meetings on this issue. Therefore, experts of the Tax and Budgeting Reform group and Law Enforcement Agencies Reform group of the Reanimation Package of Reforms consider it unacceptable to further delay the consideration of the draft law on the basis of position of the Executive Committee of the National Reform Council.

Experts also draw attention to the fact that for over half a year, tax militia has been operating outside the legal field, committing unlawful actions and receiving funding.

In this regard, the experts urge the National Reform Council to immediately hold a meeting to review the draft law “On the Financial Investigation Service” and send it to the Parliament as soon as possible, based on the draft law, approved by the Government, taking into account the number of priorities, jointly developed by MPs, business associations and the public, in particular:

Experts of the Tax and Budgeting Reform group and Law Enforcement Agencies Reform group of Reanimation Package of Reforms emphasize: the establishment of an independent, high-integrity and effective Financial Investigation Service was publicly supported by the President of Ukraine and the Government. It is an inherent part of the reform of the State Fiscal Service and one of the key requirements of the IMF.

It is significant to note that, according to the recent polls, foreign investors name repressive actions of law enforcement agencies among the key obstacles to the inflow of investments. That is why experts insist on unacceptability of further activity of the tax militia outside the legal field and urge the authorities against further delays in the establishment of the Financial Investigation Service. Experts also call on the National Reform Council to immediately approve and submit to the parliament respective draft law approved by the Cabinet of Ministers, civil society and the business community.