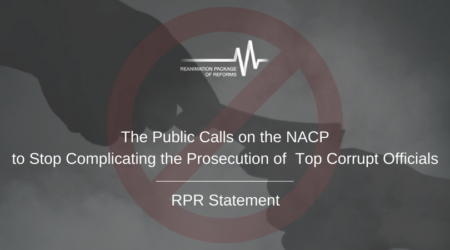 On December 8, 2017, the National Agency on Corruption Prevention (NACP) approved the clarification according to which pre-trial investigation regarding illicit enrichment or false statements in the declarations by state officials will only be possible based on preliminary NACP conclusion. Otherwise, initiating such investigation will be considered an “unjustified interference in the private life” of such an official.

Experts of  the civil society coalition Reanimation Package of Reforms are convinced that this clarification, even though it is lacking legal justification, is an attempt to obstruct any investigation by law enforcement agencies regarding illicit enrichment and false  statements in declarations.

CCPU provisions in no way associate the launch of pre-trial investigation, validity and admissibility of evidence of illicit enrichment and false statements in declarations with the availability, absence or content of the NACP conclusion. According to the CCPU, no evidence, including the NACP conclusion, shall have a predetermined force, and these are the investigators, prosecutors and courts only that are authorized to assess the above.

At the same time, detectives of the National Anti-Corruption Bureau of Ukraine (NABU) alone are investigating about 80 cases of alleged misstatements in declarations and illicit enrichment. Moreover, two judges who have stated false information in their electronic declarations have already been served with charges.

For more than a year of its operation, the NACP has failed to introduce an automated declaration verification system. Meanwhile, the current procedure of full verification of declarations disables this process.

However, instead of focusing efforts on effectively performing its functions, the NACP leadership goes beyond its own authority and attempts to complicate prosecution of top corrupt officials. These actions of the agency’s leadership once again highlight an urgent need for immediate relaunch of this body.

In view of the above said circumstances, experts of Reanimation Package of Reforms call on: