Reanimation package of reforms > News > Statements > THE PUBLIC CALLS ON THE MEMBERS OF THE PARLIAMENT TO WITHDRAW THE DRAFT LAW No. 7206 THAT DESTROYS THE COMPETITION IN PUBLIC PROCUREMENT 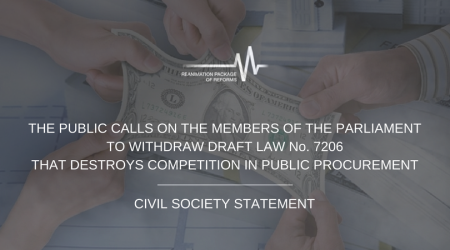 THE PUBLIC CALLS ON THE MEMBERS OF THE PARLIAMENT TO WITHDRAW THE DRAFT LAW No. 7206 THAT DESTROYS THE COMPETITION IN PUBLIC PROCUREMENT

On October 17, 2017, the group of MPs from different fractions submitted to the Parliament draft law No.7206. Although the authors entitled the draft law patriotically, namely “Buy Ukrainian – pay the Ukrainians”, it contains lobbying provisions of particular producers under the guise of populism.

On November 15, this draft law was supported in the 1st hearing by the respective parliamentary committee,  meaning that in the short term it could appear for consideration in the plenary hall.

The MPs propose to provide Ukrainian business with the preferences by introducing criteria of the local component, which will be calculated based on controversial formulas and will create significant bureaucratic barriers for participants and purchasers: preparation of new ambiguous certificates, blocking of proposals, etc.

The proposed “novations” completely contradict Ukraine’s international obligations to World Trade Organization (in 2016, Ukraine joined the WTO Agreement on Government Procurement) and the European Union (the provisions of the draft law violate the EU-Ukraine Association Agreement that fully came into force on September 1, 2017).

This approach destroys the fundamental principles of one of the most successful reforms of recent years – the ProZorro public procurement system. Without guaranteed conditions for competition, public procurement is under the risk to turn into a closed market for somebody’s own interests. However, this time it is happening under the cover of the pseudo-patriotic protectionism. The public draws MPs’ attention to the fact that more than 99% of participants and winners of the ProZorro system are Ukrainian companies. This figure clearly illustrates that there is no need for establishing additional protection of Ukrainian producers in the public procurement.

We are strongly convinced that the real purpose of the draft law is to enable particular companies to win tenders contrary to the principles of ProZorro. MPs are willing to create conditions for the overvaluation of prices by some enterprises, which will be lobbied by particular groups. Should this draft law be adopted, the state will overpay from the taxpayers money, while the business, in the absence of the competition, will lose a stimulus for development, improvement of products quality and modernization of the production facilities  Adoption of draft law No.7206 is posing a risk of worse goods and services for a higher price on Ukrainians.

Center for public monitoring and research

Institute of Analysis and Advocacy

Philosophy of the Heart

Institute of Social and Economic Transformation