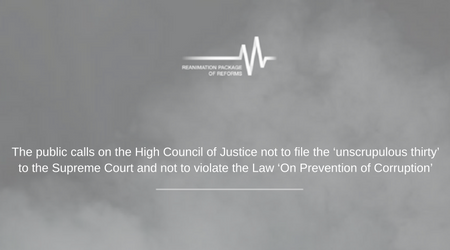 September 14th, the High Council of Justice commences consideration of the recommendations of the High Qualifications Commission of Judges of Ukraine concerning 120 winners of the competition to take the offices in the new Supreme Court. At its meetings, the High Council of Justice will decide who from the list of the candidates would be submitted to the President of Ukraine for appointment, and who are not.

30 candidates out of 120 have received negative opinions of the Public Integrity Council and do not meet the criteria of integrity and professional ethics. These candidates submitted false information in the declarations, participated in political persecutions, banned peaceful meetings during the Revolution of Dignity, made politically biased decisions, significantly violated the decisions of the European Court of Human Rights and human rights, opposed the cleanup of the judiciary or could not explain the origin of their own wealth.  The appointment of such candidates will unequivocally negatively affect the level of trust in the judiciary and jeopardize the entire judicial reform, which in any case is unacceptable.

According to the Constitution of Ukraine, the judge must be scrupulous. According to the law, the High Council of Justice is not obliged to ask that a particular candidate be appointed if it has any reasonable doubts as to this candidate’s integrity or professional ethics or if there are any other circumstances which might affect public trust in the judiciary. In addition, judges are appointed for an indefinite term, unreasonable decisions such as the appointment of unscrupulous judges will have long-term negative consequences for the country.  Therefore, it is not merely a right, but an obligation of the High Council of Justice not to recommend appointing such candidates.

At the same time, the public pays special attention to the fact that the members of the High Council of Justice, as persons, who come within the provisions of the law ‘On Prevention of Corruption’, are obliged to take measures to prevent and resolve conflicts of interests, which may take place due to the examination of candidate materials. In particular, while members of the High Council of Justice will have to consider themselves as candidates to the Supreme Court, their colleagues in the Council or candidates who are either participants in the same court cases or otherwise associated with a member of the Council.

Among 120 winners of the competition two are active members of the Council: Alla Lesko and Alla Oliynyk. In addition, a number of Council members have conflicts of interests over other candidates that they will have to consider.

Moreover, in August 2017, the Prosecutor General’s Office of Ukraine handed up to the member of the High Council of Justice Pavlo Grechkivsky an indictment of attempting to commit a fraud in an especially large amount. Although Grechkivsky’s guilt has not been proven in the court, his participation in the election of judges of the Supreme Court, in particular those, who may in the future consider cassation complaints in a criminal case against him, may undermine public trust in the entire contest procedure.