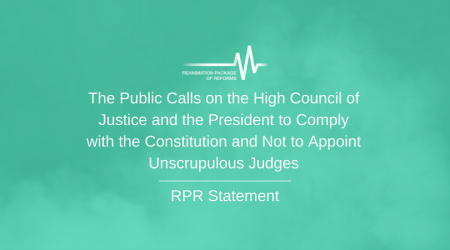 Last week, the High Qualification Commission of Judges published the list of winners of the competition to take the offices in the new Supreme Court. 30 candidates out of 120 have received negative opinions of the Public Integrity Council and do not meet the criteria of integrity and professional ethics.

According to the law, the High Council of Justice is not obliged to ask that a particular candidate be appointed if it has any reasonable doubts as to this candidate’s integrity or professional ethics or if there are any other circumstances which might affect public trust in the judiciary. According to the Constitution of Ukraine, a judge shall meet the integrity criteria. Therefore, it is not merely a right, but an obligation of the High Council of Justice not to recommend appointing such candidates.

One in four candidates recommended by the High Qualification Commission of Judges has either violated human rights, adopted politically motivated decisions, or cannot explain the origin of their property. If such candidates are appointed to offices, the level of trust in the judiciary will be negatively affected and the entire judicial reform will be threatened. This is absolutely inadmissible.

Therefore, should the High Council of Justice recommend that such candidates are adopted, the President should refrain from appointing them as Supreme Court judges.

Reanimation Package of Reforms, CHESNO: Filter the Judiciary!, Anticorruption Action Centre, Automaidan and DEJURE Foundation stress that it is the President of Ukraine as the initiator of the judicial reform that bears full political responsibility for its outcome.

Since Supreme Court judges are appointed for an indefinite term, unreasonable decisions such as the appointment of unscrupulous judges will have long-term negative consequences for the country which significantly exceed any short-term political benefits from the appointment of loyal judges.

In view of the above said, we call on:

– the High Council of Justice to refuse making a motion for the appointment of the judges who received a negative opinion of the Public Integrity Council and whose appointment is likely to undermine public trust in the judiciary;

– the President to refrain from appointing the judges who do not meet the criteria of integrity and professional ethics and not to put democracy in Ukraine in jeopardy.