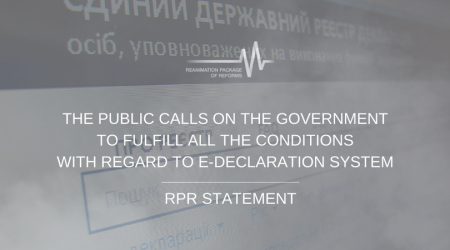 The launch of the electronic declaration system is an important step towards ensuring an effective anti-corruption policy in Ukraine. Introduction of this system was included in the Action Plan on Visa Liberalization between Ukraine and the European Union. Furthermore, e-declaration of officials’ assets was a requirement of a number of agreements on the financial support for Ukraine by the EU, including State Building Contract and the Memorandum of Understanding for Macro-Financial Assistance to Ukraine.

The above said Memorandum provides that Ukraine receives EUR 1.8 billion as a loan in three tranches provided that respective conditions are fulfilled. The last tranche can be received by Ukraine in December 2017. Among other conditions for its disbursement there is a condition to ensure independence of the National Agency on Corruption Prevention (hereafter – NACP), its sufficient institutional capacity and the correct verification of electronic declarations.

Receiving the second tranche of macro-financial assistance from the EU half a year ago, the President of Ukraine and the Cabinet of Ministers have reported about the NACP  being a new anti-corruption body provided with all the necessary resources. They have also emphasized the launch of e-declaration system, which by then received over a million declarations of high ranked officials.

However, as of now, neither appropriate functioning of the NACP, nor appropriate e-declaration verification was ensured. The NACP remains politically dependent on the top government officials and demonstrates extremely low levels of effectiveness. The process of e-declarations verification has not showed yielded the expected results. During over a year since the NACP establishment, the agency managed to examine only 81 electronic declarations, in 7 of which the signs of false data declaration were found. The effectiveness of verification cannot be ensured without launching an automatic verification system, providing the NACP with full access to all necessary registers and databases as well as amending the procedure of full verification of declarations.

As for now, Ukraine does not meet the requirement proper verification of e-declarations, which questions Ukraine’s chances for receiving the third tranche of the macro-financial assistance from the EU. To receive the last tranche, it is crucial not only to report on the formal fulfillment of international partners’ conditions, but also to ensure the effective functioning of the NACP and e-declaration system as well as to eliminate preconditions for the conflict of interests and misuse of office by the Ukrainian officials.

In view of the above, civil society coalition Reanimation Package of Reforms calls on high ranked state officials to cease sabotaging full verification of electronic declarations. Expert community calls on the European Union to demand Ukraine’s full and uncompromised fulfillment of the established conditions for the disbursement of the third tranche of macro-financial assistance, namely: