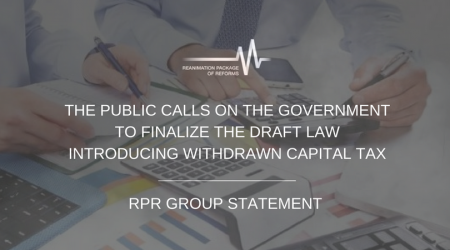 Experts of the Tax and Budget Reform Group of the Reanimation Package of Reforms call on the Cabinet of Ministers of Ukraine and the Ministry of Finance to promptly approve a draft law introducing withdrawn capital tax and submit it to the Verkhovna Rada in accordance with clause 5 of the Law of Ukraine “On amendments to the Tax Code of Ukraine to improve the investment climate in Ukraine.”

The experts highly appreciate the results of activity of the working group set up under the Ministry of Finance: the draft law prepared by the group takes into account all the experts’ proposals and is thoroughly developed, well-balanced, and ready to be submitted to the parliament.

Numerous studies carried out by the Institute for Social and Economic Change, the European Information and Research Center, WTS Consulting, the Ukrainian Institute for the Future, the German Advisory Group, and the Institute for Economic Research and Policy Consulting confirm the conclusion that the proposed transition to the taxation of distributed profit (withdrawn capital) will create prerequisites for the growth of investments and sustainable economic development of Ukraine. At the same time, the IERPC experts stress that it is necessary to implement the relevant institutional reforms, in particular, to reboot the State Fiscal Service, to achieve significant positive results.

Adoption of this draft law will have the following key positive outcomes: reducing the opportunities for corruption and abuse by tax authorities; increasing internal investment resource of the companies located in Ukraine; bringing financial statements in line with reality; potential decrease of budget shortfalls caused by aggressive tax planning with the use of offshore low-tax jurisdictions; simplifying administration of corporate profit tax and reducing the need for inspections.

The experts of the RPR Tax and Budget Reform Group agree with the Ministry of Finance and the State Fiscal Service in that it is necessary to consider the risk of a possible temporary drop in budget revenues from this tax. They call on these bodies to immediately publish their estimates of these losses (specifying relevant calculations). At the same time, the experts believe that increase in tax revenues as a result of implementation of economic de-shadowing measures over the past few years should be aimed at creating prerequisites for sustainable economic growth.

In particular, these measures increased the share of tax revenues in the general budget in relation to GDP from 23.5% in 2013 to 27.3% in 2016, while in the first quarter of 2017, this share was the largest ever since Ukraine became independent – 30% of GDP. The experts are convinced that the revenues received as a result of de-shadowing should cover the potential losses from the introduction of the withdrawn capital tax. In addition, the draft law provides for the taxation of schemes aimed at withdrawing capital abroad, which inflicts losses to Ukraine in the amount of about 10% of its GDP. This will also compensate for the potential budget losses.

Taking the afore-mentioned into consideration, the experts of the Tax and Budget Reform Group of the Reanimation Package of Reforms call for implementing the effective legislation and the regulations of the National Council of Reforms and to submit the draft law to the parliament as soon as possible.