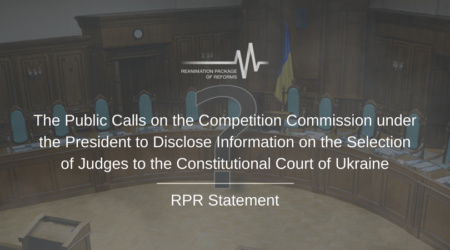 According to Part 6 of Article 12 of the Law of Ukraine “On the Constitutional Court of Ukraine”, the general term for conducting a competition for the selection of candidates for a position of a CCU judge is two months. Taking into account the moment of the selection of CCU judges according to the quota of the President, established in the Terms and Conditions of conducting competition to fill the vacancies of the CCU judges, the competition commission shall draw up the lists of candidates recommended for the position of a judge of the Constitutional Court by December 19, 2017.

The competition commission under the President of Ukraine allowed 15 of 21 candidates to take part in the selection. The decision has not been made public yet despite the fact that it was adopted on November 22. This does not allow assessing the grounds for the refusal to allow six candidates to participate in the selection.

As the CCU judges’ selection procedure de facto consists of a formal assessment of documents, holding interviews with the candidates and conducting a special examination of candidates, it is unclear how the competition committee will establish the criteria for the candidates to meet the requirements for the position of a CCU judge. This, in particular, concerns new constitutional requirements for high moral qualities and a requirement to be a recognized lawyer.

The lack of publicity in the selection process, its closed nature gives rise to distrust in the process and does not contribute to restoring public trust in the Constitutional Court of Ukraine. Therefore, the Center of Policy and Legal Reform and the civil society coalition Reanimation Package of Reforms call on the competition commission selecting candidates for the positions of the CCU judges to disclose the following information regarding the persons to be appointed by the President of Ukraine by December 19: