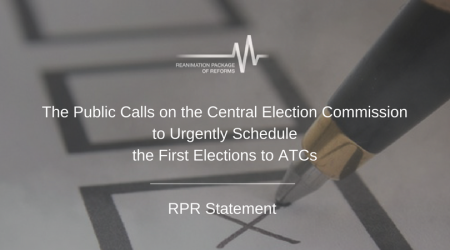 In recent years authorities, local self-government bodies, the public and Ukraine’s international partners have made significant efforts to ensure the implementation of the reform of local self-governance and the formation of capable territorial communities.

Due to coordination of efforts, 174 ATCs went through the full procedure for the establishment of amalgamated territorial communities in 2017, which merged in total more than 773 rural, township and urban communities with population over 1 million 500 people.

The final stage of the formation of capable amalgamated territorial communities is calling the elections there by the Central Election Commission.

According to the Article 15 of the Law of Ukraine “On Local Elections”, the first local elections are to be scheduled no later than 70 days prior the election day. Taking into account the regulations of the Budget Code of Ukraine, amalgamated territorial communities shall enter into direct intergovernmental fiscal relations with the State Budget if created in accordance with the law and prospective plan till 15th of October. Non-scheduling or scheduling the elections for the later period jeopardize the ability of 174 ATCs to enter new inter-budget relations and receive funds for their development.

Taking into account the abovementioned regulations of legislation, the first local elections are to be scheduled no later than on 29th of October, 2017.

In addition, we underline that the Verkhovna Rada adopted and the President of Ukraine signed the law “On Amendments to Certain Legislative Acts of Ukraine regarding the peculiarities of voluntary amalgamation of territorial communities located in the territories of neighboring rayons (districts)” as of 14.03.2017 №1923-VIII which settled the issue of calling the elections to ATCs amalgamated around the cities of oblast significance and the communities belonging to different districts.

In this view, the largest civil society coalition Reanimation Package of Reforms calls on the Central Election Commission to schedule the elections to all the amalgamated territorial communities, regarding which respective requests from oblast state administrations were submitted, including those ATCs that have amalgamated around the cities of oblast and that comprised communities of various districts.