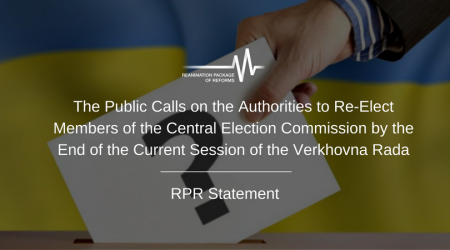 For more than three years the Verkhovna Rada and the President have not been able to reach understanding on the new composition of the Central Election Commission of Ukraine. 13 out of 15 CEC members have lost public legitimacy, since their terms of office have come to an end. Despite this fact, the MPs and the President of Ukraine can neither agree nor approve new members of this agency, extremely important for a democratic country, although the Head of state and the Parliament are legally obliged to do so.

Therefore, the representatives of civil society call on the Verkhovna Rada and the President not to delay any longer and to reach a final consensus on this issue, since without a reboot of the Central Election Commission, the credibility of the results of any future elections in Ukraine is seriously jeopardized.

In June 2016, President Petro Poroshenko submitted a list of 11 candidates to reboot the CEC. However, this list ignores the proposals of four out of eight deputy factions and groups, which contradicts the Code of Good Practice in Electoral Matters of the Venice Commission: the Code stipulates that the independence of electoral collegiate bodies is ensured through the representation of interests of various political factions and groups.

At the same time, it is essential not only to follow the procedure or have the factions and the deputy groups approve the CEC candidates. The persons running for those important offices shall also meet three key criteria:

Given the urgency of this issue, we call on the President to complete the consultations with the factions concerning an updated, well-balanced list of the candidates and to re-elect the Central Election Commission in the follow-up of those consultations by the end of the current session of the Verkhovna Rada.