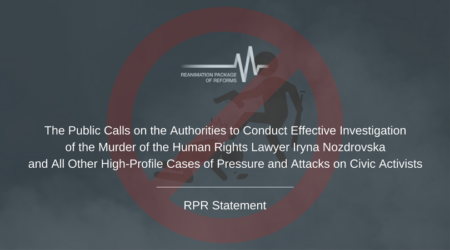 On January 1, 2018, the body of Iryna Nozdrovska, a lawyer and human rights activist, was found in a river in Demydiv village of Vyshhorodskyi District (Kyiv region). On December 30, 2017, Vyshgorod Police Department issued a missing person alert for Nozdrovska, who disappeared on December 29.

Iryna Nozdrovska was working on a case of death of her sister – Svitlana Sapatinska – for over two years. On September 30, 2015, in the village of Demydiv, she was knocked down and killed by Dmytro Rossoshanskyi, nephew of the chairman of the Vyshhorodskyi District Court. Sapatinska died due to serious injuries.

After a fatal accident, Rossoshanskyi was not arrested; instead, he was released and placed under house arrest. His blood for subsequent tests was collected 8 hours after the accident, and the results were received 5 days thereafter. The court did not take into account the fact that Rossoshanskyi was intoxicated.

The evidence for the defense of Nozdrovska’s sister was collected by Nozdrovska herself. This was accompanied by threats and harassment on part of Rossoshanskyi who wanted her to provide a statement that she had no complaints against him. In May 2017, thanks to the indomitable and principled position of Nozdrovska, Rossoshanskyi was sentenced to 7 years in prison, his defense filed an appeal. On December 27, 2017, the Court of Appeal of Kyiv held a hearing during which it refused to grant amnesty to Rossoshansky and continued the preventive measure in the form of detention for 60 days. In the courtroom, his father once again publically threatened the human rights defender.

The tragic story of Nozdrovska shows the depth of the abyss in which Ukrainian law enforcement system is. Due to the lack of an effective investigation, lawyers or relatives of victims are forced to do the job of police officers and prosecutors forcing the court to make a decision. It is obvious that if the victims are the only ones interested in the establishment of justice, they can be pressured or made silent through murder, as was the case with Iryna Nozdrovska.

Post-Maidan society takes such events hard. Unless there is prompt and qualitative investigation of the crime with the disclosure of murderers and contractors, the system will take another step towards vigilante justice, grenades in the courtrooms and at the doors of investigators’ flats.

Unfortunately, the situation with the pressure on human rights defenders, civic activists and whistle-blowers who are struggling against the old system has in the recent months become truly threatening. Geography of these cases is very broad. In December 2017, the car of the Civil Control Platform NGO and ZOV Initiative activist Hennadii Kyrychenko was burned in Dnipro. On November 22, 2017, a whistle-blower judge Larysa Holnyk and her husband Ihor Havrylenko were attacked in Poltava. A similar situation is unfolding in Odesa where civic activists are detained, arrested and beaten up. In the autumn, two cases of severe beatings took place in Kharkiv. Facts of pressure on public journalists were recorded in Rivne.

Civil society in Kyiv and regions is being persecuted by corrupt officials and anti-reform activists. The Reanimation Package of Reforms has repeatedly appealed to the representatives of the supreme authority and the relevant authorities to assess high-profile events and prevent further aggravation of the situation, but did not receive any response.

The public is convinced that toothless and corrupt law enforcement and judicial system, lack of punishment for the pressure, attacks on and murder of civic activists give free rein to organized crime, unscrupulous business and corrupt local authorities for even more brutal struggle against activists, whistle-blowers and human rights defenders. That is why Reanimation Package of Reforms calls on: