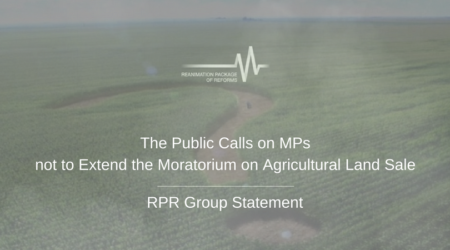 On December 5, Parliamentary Committee on Agrarian Policy and Land Relations recommended the Parliament to include in the agenda and adopt in both readings Draft Law “On Amendments to Section X “Transitional Provisions” of the Land Code of Ukraine Regarding the Extension of the Prohibition on the Alienation of Agricultural Land”. This draft law extends the moratorium on the sale of agricultural land for another year. As early as on December 7, the document will be submitted to the session hall for voting.

Adoption of this draft law will signify not just the withdrawal of the land reform from the government agenda until the upcoming elections in 2019, but also the preservation of the status quo and further stagnation of the agricultural sector in Ukraine.

Progressive expert community strongly opposes the extension of the moratorium and emphasizes that a free land market is a powerful incentive for the agricultural sector and the economy. In addition, from a legal point of view, the moratorium violates constitutional rights of seven million Ukrainian landowners, depriving them of their freedom of choice. The lack of alternatives does not only narrow rights, but also entails specific negative consequences for the economy: conditional monopolization of lease and containment of its value, market deformation, as well as shadow land alienation schemes.

Experts of Economic Development Group of Reanimation Package of Reforms conducted a study of the land reform in sixty countries and found the following correlation: the less regulatory mechanisms exist in the market, the higher the cost of land assets and the more effective agricultural sector is. In view of this, experts do not support a phased launch of the land market and the pilot projects in this sector.

Expert community already has the necessary basis for choosing an optimal model of the land market in Ukraine and enabling its implementation. Experts of the Economic Development Group of Reanimation Package of Reforms do not support any restrictions on the market as they will restrain demand and glut the supply market, offering an illusion of security instead. At the same time, a fully open market can generate an overall economic effect worth $100 billion during ten years after its introduction.

Given the above, experts of the Economic Development Group of Reanimation Package of Reforms call on the Parliament not to support Draft Law of Ukraine “On Amendments to Section X “Transitional Provisions” of the Land Code of Ukraine Regarding the Extension of the Prohibition on the Alienation of Agricultural Land” and not to extend the moratorium on the sale of agricultural land, as well as to continue working on identifying an optimal model of land market for Ukraine.