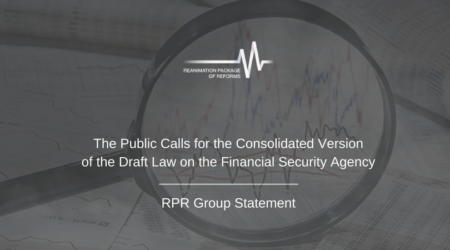 On March 19, Nina Yuzhanina, head of the Taxation and Customs Policy Committee of the Verkhovna Rada, registered the draft law “On the National Financial Security Bureau” (Reg. No. 8157). The document was developed by a working group formed in the profile committee under the leadership of Ms. Yuzhanina. As the author herself pointed out, the draft law was drafted on the instructions of the President on the basis of the decision of the National Reforms Council.

It became an alternative to the draft law “On Financial Intelligence Service” which the Cabinet of Ministers of Ukraine worked on with the experts and business representatives in the spring of 2017. The document was approved by the Government and submitted to the National Reforms Council under the President of Ukraine.

Experts of the Law Enforcement Agencies Reform Group and the Tax and Budget Reform Group of the Reanimation Package of Reforms emphasize: the parliament should promptly regulate the legal sphere of financial crimes investigation.

However, the draft law “On the National Financial Security Bureau” (Reg. No. 8157) cannot be approved in the current wording for the following reasons:

In addition to Nina Yuzhanina’s document, another two alternative draft laws developed by Andrii Zhurzhii (No. 8157-1) and Tetiana Ostrikova (No. 4228) were registered in the Parliament. They aim to govern the scope of the financial crimes investigation.

Taking into account the above, the experts of the Law Enforcement Agencies Reform Group and the Tax and Budget Reform Group of the Reanimation Package of Reforms call on the authors of the three draft laws to hold a number of expert discussions at the Committee on Legislative Support of Law Enforcement (recognized as the Main Committee) and based on an inclusive process work out an updated consolidated version of the draft law taking into account proposals of the experts and representatives of business associations.