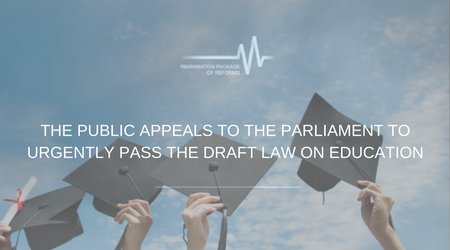 Comprehensive modernization of education through the reform is not just ripe, but already overripe. The Law on Education, based on which the educational institutions function today, was adopted by the Soviet Union in May 1991. Since then, only cosmetic changes have been undertaken. Without a new comprehensive piece of legislation, systemic reform is impossible.

On October 6, 2016, the Parliament adopted the draft law No. 3491-d “On Education” in the first reading. 277 MPs voted for this decision. During this year, MPs, the profile committee and the Ministry of Education and Science have completed working on the draft law and finalized it for the second reading. In general, discussion concerning the draft law has lasted more than 3 years. All interested groups (in particular, experts, scholars, educators, parents, students and employers) have been involved.

On September 5th, the draft law should be introduced to the Parliament. The document is aimed at increasing the investment potential of the education system. The draft law is designed to solve numerous systemic problems. The implementation of the draft law will enhance the quality and competitiveness of education in the new economic and socio-cultural conditions.

Experts of the group “Education. Science. Innovations” of the Reanimation Package of Reforms indicate that the adoption of the draft law is only one of the stages of a complete reform of education, since a number of questions should be regulated by separate laws. At the same time, the public calls on MPs to support the draft law No. 3491-d in order to finally launch the educational reform.

Experts of the group “Education. Science. Innovations” of the Reanimation Package of Reforms

Ukrainian Institute for the Future