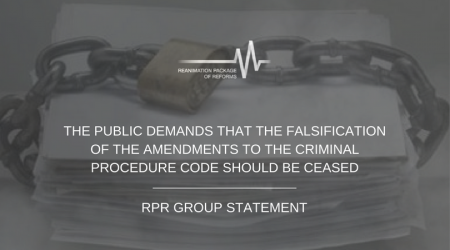 On the 3rd of October, the Verkhovna Rada adopted draft law No.6232, which, in particular, amended the Criminal Procedure Code. Experts of Reanimation Package of Reforms have revealed falsification of the amendments of the Code provisions, which were aimed at blocking the work of the National Anti-Corruption Bureau of Ukraine (NABU).

Members of Parliament Olena Sotnyk and Oksana Syroid proposed an amendment No.176 to the Section IV of the draft law during its preparation for the second reading. According to this amendment, the Prosecutor General’s Office of Ukraine (PGO) should complete the investigation of corruption crimes of former high officials’ on its own, which lie within NABU’s investigative jurisdiction, but were started before NABU’s establishment. The amendment was approved by the subject committee without changes. The draft law was adopted in the Committee’s wording, so this amendment should have been included into the final text signed by the Verkhovna Rada’s Chairman, which was later sent for signature to the President of Ukraine.

However, in the final version of the law, sent by the President Administration to the Cabinet of Ministers of Ukraine, the amendment mentioned above is absent. It may only serve as the evidence of an intentional falsification of the amendments to the Criminal Procedure Code at one of the stages.

In case of the absence of the amendment, hundreds of proceedings of corruption crimes of the Ukrainian high officials which have been under investigation of the Prosecutor General’s Office before the NABU’s establishment are to be transferred for further investigation to the National Anti-Corruption Bureau of Ukraine. The amount of proceedings for the transfer reach as much as 15 000. Their transfer will block NABU’s work and will not allow to conduct effective pre-trial investigations of the high officials’ crimes. Furthermore, a significant amount of proceedings was purposely conducted inappropriately by the PGO employees, which makes their successful completion almost impossible.

For three years of fruitful cooperation of Reanimation Package of Reforms and the Parliament, after development and adoption of dozens of laws, we have never faced such a brutal falsification. Now a shameful practice of “button-pushing” is complemented by the falsification of the laws adopted by the Parliament. It puts under the serious risk the trust between the RPR and the Verkhovna Rada leadership, in particular, the Chairman of the Verkhovna Rada and the Head of the Verkhovna Rada Secretariat, as well as the possibility of further constructive cooperation between us.

Experts of the RPR expert group “Anti-corruption reform” demand that another attempt to block the work of the National Anti-Corruption Bureau through falsification of the adopted amendments to the Criminal Procedure Code should be ceased.

We also call on the Chairman of the Verkhovna Rada Andriy Parubiy to publish the text of the Procedural Codes, sent by him for the President’s signature, and to dismiss all suspicion of a serious crime of forging the text of a law, as well as to conduct an internal investigation in order to bring the perpetrators to justice.