Reanimation package of reforms > News > Events > The Powers of the Mayor and the Head of KSCA in Kyiv Should Be Separated and District Councils Need to Be Reinstated, – MPs and Experts 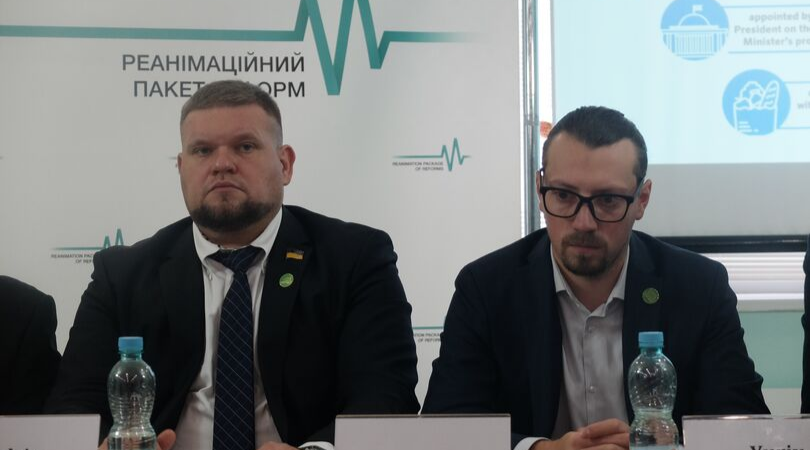 The Powers of the Mayor and the Head of KSCA in Kyiv Should Be Separated and District Councils Need to Be Reinstated, – MPs and Experts

MPs and experts of the RPR Coalition discussed the draft law “On the Capital of Ukraine”.

The mayor of Kyiv and the Head of Kyiv City State Administration have different functions, therefore one person cannot hold both offices, and the district councils in Kyiv must be reinstated. All participants agreed there with at the diplomatic breakfast, organized by the Reanimation Package of Reforms Coalition on September 26, during which the draft law No. 2143 “On the Capital of Ukraine – Kyiv Hero City” was discussed.

District councils in Kyiv were abolished in 2010 by then-mayor Leonid Chernovetskyi and President Viktor Yanukovych, reminded the author of the draft law No. 2143 MP from the Servant of the People, Andrii Klochko. “The population of Kyiv’s districts makes 250-350 thousand people, the same as the population of Iceland, but the districts do not have local self-government bodies, only district state administrations run by appointees,” says another MP from the Servant of the People, Vitalii Bezhin. New zoning should be conducted in Kyiv, as existing districts do not coincide with the economic boundaries of communities, and the KCSA should not be an executive and controlling body at the same time.

“One and the same person cannot implement decisions before lunch, and after lunch check their implementation,” argues Bezhin.

The prefects envisaged by the draft law will perform economic functions and will also be able to block illegal decisions of district councils through appeals to court.

“We are ready to listen to the comments to the draft law, in particular, proposed by the RPR Coalition Council member Anatolii Tkachuk,” summarizes the MP.

The current situation in Kyiv violates the European Charter of Local Self-Government, because there should be a separation of executive power and local self-government, said RPR Coalition expert Yurii Hanushchak. In the capitals of the EU countries with a population of more than 1 million people, there is a division into districts, and most of these cities have district councils. In unzoned capitals, it is only the city center that is attractive for businesses, while decentralization makes it possible to actively attract investment to other areas.

District councils will adopt one-time acts rather than regulations, the adoption of which is within the exclusive jurisdiction of the Kyiv City Council, says Hanushchak: “At present, the Kyiv City Council considers 600 decisions at one session, so its burden needs to be decreased by delegating some of the powers to the district councils. In addition, the budget of Kyiv (UAH 60 billion) is spent virtually without state control, which has to be introduced by the draft law No. 2143”.

“This draft law is in line with the Constitution of Ukraine and the European Charter of Local Self-Government, so I support its adoption by the Verkhovna Rada in the first reading,” added the expert.

The district councils of Kyiv should have a minimum equal list of powers to avoid imbalance between them, but the functional advantage should remain with the city council, says RPR Coalition Council member Anatolii Tkachuk. He invited all stakeholders to discuss and take into account all current comments on draft law No. 2143, and after that submit it to the Verkhovna Rada for consideration.

A new law on the capital is needed, agreed the Deputy Executive Director of the Association of Ukrainian Cities Volodymyr Miahkohod. “We agree on many points of the draft law No. 2143 with its authors (re-establishment of district councils, separation of powers of the mayor and the head of the KCSA) but at the level of details we have many proposals, for example, the scope of KCSA’s control over districts”, said Miahkohod, adding that the Association of Ukrainian Cities is ready to join the amendments to the draft law.