Reanimation package of reforms > News > Events > The path to the European Union: what democratic reforms Ukraine has implemented for integration 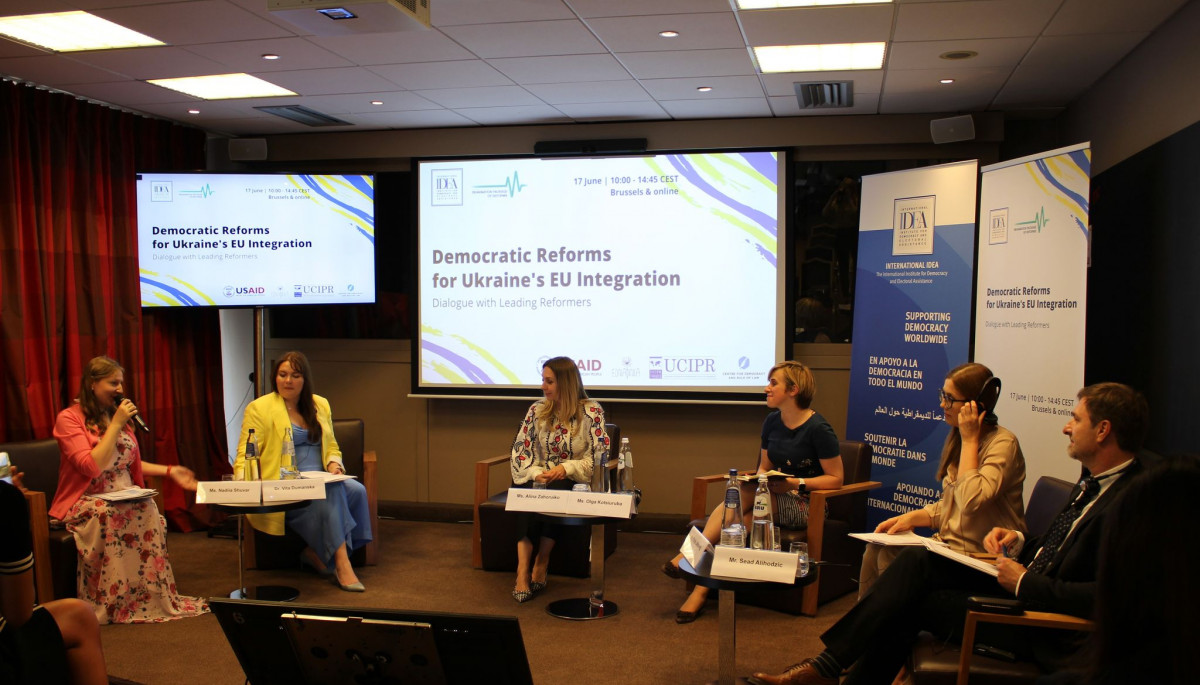 The path to the European Union: what democratic reforms Ukraine has implemented for integration

The successes of the already implemented reforms, challenges, and democratization of the country during the war were discussed by Ukrainian and international experts and politicians during the discussion “Democratic Reforms for Ukraine’s EU Integration: Dialogue with Leading Reformers” held by the RPR Coalition and the International Institute for Democracy and Election ). Oleksandr Kornienko, First Deputy Speaker of the Verkhovna Rada, outlined the topics of discussion: parliamentary reforms, electoral legislation, and decentralization.

Parliamentary reform has made significant progress over the past seven years, according to Jonathan Murphy, head of Inter Pares and IDEA International. “Among the positive developments are the lifting of parliamentary immunity, the normalization of the legislative process, and the reduction of the number of registered legislative initiatives. The ban on pro-Russian parties is also an important step, as the threat was not theoretical: many representatives of pro-Russian parties were recruited by Russia to work in the occupation administrations, “he said.

“The quality of bills should not be reduced because of the war. On the contrary, expert and analytical support for the development of bills should be strengthened, – added Olga Sovhyrya , MP, Deputy Chairman of the Verkhovna Rada Committee on Legal Policy.- At the same time, we continue to interact with civil society because it is crucial to communicate the decisions that are made with people. We are updating the ways of communication with citizens. For example, the Verkhovna Rada’s telegram channel has increased its subscribers several times since the beginning of the large-scale war. ”

The key to parliamentary reform should be to rebalance the balance between the president and parliament, says Yulia Kyrychenko, a board member of the Center for Policy and Legal Reforms and co-chair of the RPR Coalition Board. The main problem after Ukraine’s independence was the mechanism of state power, as every president, regardless of the constitutional model, tried to strengthen his power, she explained.

According to Oleksandr Zaslavsky, Director of Analytics at the Agency for Legislative Initiatives, the priorities for reform of the Verkhovna Rada should include the following:

“Parliamentary initiative should be much higher, ” added Volodymyr Wenger, executive director of the Kyiv-Mohyla Rule of Law Center. The role of parliament is especially in cooperation with international institutions and reviewing the necessary legal framework for war crimes, he said.

Vitaliy Bezgin, MP, Chairman of the Subcommittee on Administrative and Territorial Organization of the Committee on State Building, Local Self-Government, Regional and Local Development, explained the success story of decentralization reform: “Decentralization is a reform that has not been changed by the transit of power. This was the case when the previous government handed over its affairs to the new government without political overtones, which is not typical for Ukraine. Secondly, this reform required joint work of various stages, compromises between the central government and local self-government, and public experts. It is also very important that the level of support for decentralization in Ukraine has been at the level of 60-70 percent for several years.”

Ihor Koliushko, Chairman of the Board of the Center for Policy and Legal Reforms, said: ” The reform has been under preparation for a long time, since 2005. It involved public experts, and the concept of decentralization was not owned by a particular political force. ” The expert noted that in order to complete the reform, it is necessary to adopt a number of laws: on the administrative-territorial system under the new conditions, on local state administrations, local referendums, and on service in local self-government bodies.

Decentralization reform has also proven effective in wartime, said Yuriy Hanushchak, the RPR Coalition expert and head of the Institute for Territorial Development.” In 2022, the local government defended itself. Representatives of local self-government bodies built fortifications themselves, as they had financial and infrastructural resources. Territorial defense units were also organized on the basis of territorial communities. Local self-government helped repel Russia’s invasion during a full-scale invasion,” he explained.

Experts agree that elections in Ukraine should be transparent and open even in times of war.” We changed the electoral system to a proportional system with open lists, which was demanded by the public. This model operates in most EU countries. We have unified election dates, gender quotas, penalties for violating the election process, and so on. A working group of 90 experts is already working in the parliament, who have developed an array of new changes to the election legislation in terms of transparency and strengthening control over party finances, campaign regulation,” said Alina Zahoruyko, MP, First Deputy Chairman of the Committee on state-building, local self-government, regional and local development.

Julia Salzberg, head of IntegrityUA, said that electronic registers of party reporting were a breakthrough in reforming election legislation. “State funding has helped increase transparency in the work of parties. Society has finally seen where parties spend their money. The norm of additional state funding for the observance of gender quotas promotes equality: in the eighth convocation – 12% of women, in the ninth – 21%,” she added. Instead, Vita Dumanska, the leader of the CHESNO movement, reminded of the risks and abuses: “Ukraine is the only country in Europe where parties do not report. It was allowed not to submit these reports due to COVID restrictions. But there is no such large-scale threat of coronavirus,” she said.

Ukraine is fighting not only for its freedom but also for the preservation and spread of democracy in Europe, and Europeans understand this, said International IDEA Secretary-General Kevin Casas-Zamora. “Every day we see how heroically Ukrainians sacrifice themselves. We support Ukrainians and a sovereign democratic Ukraine. After all, Ukraine today is fighting against authoritarianism for democracy and freedom. The success of democracy in Ukraine is important for the success of democracies in the region, in particular in Moldova and Georgia,” he said.

“EU enlargement is a marathon, but the doors of the Union must be open to Ukraine, ” added Georg Ziegler, deputy director of the European Commission’s Ukraine Support Group.