Reanimation package of reforms > News > Columns > The Normandy Summit Ended With No Breakthroughs: What Has It Achieved? 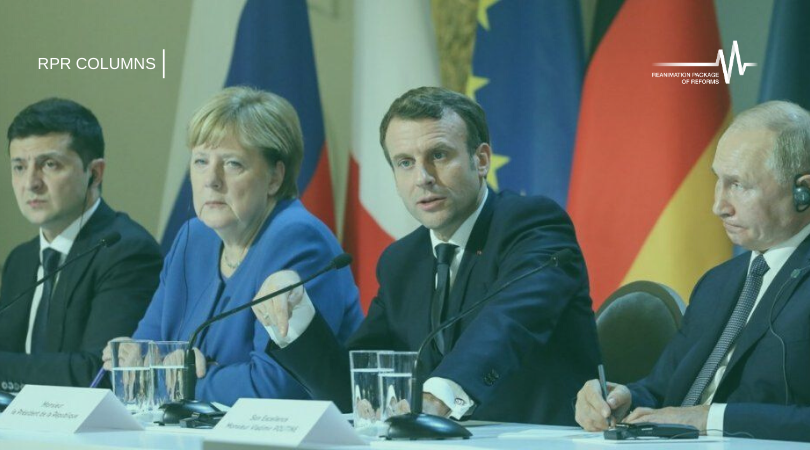 The Normandy Summit Ended With No Breakthroughs: What Has It Achieved?

The Normandy Summit in December 2019 played an important role. The tension seemed to have accumulated around the Donbas theme for more than six months and began to “tear” Ukrainian society from the inside. It seems that the key players left the field for a break – exhale, but will they return at all for the second half?

The greatest relief from all the results of the Norman meeting can be formulated like this: no betrayal took place. However, as one might expect, no acceleration in conflict resolution has taken place either. The first paragraph of the final Paris document is not fulfilled. The security situation was more aggravated, the “silence” agreed upon by the leaders of the “Norman Quartet” was not observed on a single day, and two days after the summit, Ukraine had already started counting the wounded and further killed in the declared “truce”.

Dilution of forces is meaningless in principle. If in 2019 President Zelensky’s team wanted to arrange a meeting with Vladimir Putin at all costs, the pressure to breed at the insistence of Russia was furious. Now such “enthusiasm” would simply be absurd. The criticism of the dilution of forces by the Ukrainian Defense Minister confirms a change in sentiment on the Ukrainian side. And the OSCE daily reports show that the deployment of troops in no way improves the security situation. Thus, Zolote, near which there was a deployment of forces, is constantly featured in observers’ reports as a hot spot of the Luhansk region. Thus, attempts to agree on the next stage of the dilution of forces in Minsk seem less interesting to the Ukrainian side, and Russia is primarily interested in the demilitarization of key strategic areas: Shirokine and Shastya. Ukraine will not agree to this.

The exchange of prisoners is the only success the parties can put on the table as evidence. However, even the exchange did not follow the rules agreed in Paris: Russia elementally did not acknowledge the presence of the presence in the ORDLO of all whom Ukraine considers illegally detained. Well, there is no such thing as everyone whom Kyiv wanted to return. So even the formula of “all installed on all installed” did not work, and the critically important criminals for Moscow the Ukrainian side has issued and to whom now to change those who remained in the ORDLO is a difficult question.

The OSCE mandate is not fulfilled. Monitors daily record restrictions on their movement in occupied territory. Meanwhile, Ukraine has formally asked the OSCE to extend the mission’s mandate for next year, and everyone understands that no changes in the OSCE’s work will take place without the Kremlin’s instruction to prevent the SMM patrols. However, it is absolutely correct that Ukraine has breached in the Tripartite Contact Group the implementation of another Minsk document, which Russia prefers not to mention – the Protocol of September 5, 2014. Objective: To change the focus of the border debate. If Russia wants to use the Minsk documents – it’s great, but then let’s start with the first agreements. In particular, the creation of a security zone on the Ukrainian-Russian border by the OSCE SMM. Of course, Russia does not agree to this step, nor will it agree to create another working group in the Tripartite Contact Group (TCG) on the border. However, the logic of Ukrainian negotiators in this is absolutely correct.

Well, if all this list of steps agreed in Paris is mostly on paper, should we expect a new meeting?

There is critically little reason to expect a new Norman meeting. The new summit is not in Russia’s interests. Despite the popular opinion, the Kremlin says the election is just right, but everything is not so straightforward. Russia needs any result from any efforts. And not a compromise, but the result that suits her, not Ukraine. We saw this very clearly in Paris: Russia’s position has not changed since 2015. The same intransigence on border issues, elections, “special status”. Even before Russia’s last Norman meeting, guarantees were needed that Zelensky would agree to a favorable Kremlin scenario. It didn’t work. But the second such “idle shot” Moscow is not explicitly needed.

Therefore, they have several options. One is to offer Ukraine a tempting compromise abroad. In particular, regaining control of it not after the election, but somewhere close to the election date. The “legitimacy” of the election will not be affected (it will be at zero), but the presidential team of Ukraine may be interested in such a scenario of regaining control of the territory. This seems like a compromise. However, if Russia offers such a scenario, it will be included in the package along with the actual federalization plan for Ukraine.

It is perhaps for this scenario that both Kozak’s role and Surkov’s resignation have changed. However, it would be almost unrealistic to get the Ukrainian leadership to agree to such a scenario: in Kyiv, the current authorities have already realized that the Russian scenario is not actively swallowed up by the active part of society. And President Zelensky himself outlined in December those “red lines” for which he is now crossing – all the same as signing a political sentence. In addition, let us not forget that concrete security preconditions must be created between the Paris and Berlin summits in order for the leaders’ debate on political reintegration and elections to be in principle acceptable. Of course, there will be no such prerequisites. The maximum is the dilution of forces and means in one or two sections.

If the meeting does not take place without such guarantees, it will most likely be the last attempt by the Ukrainian authorities to “agree”. However, it is hoped that Russia will agree to another stage of the exchange: more likely, already after it, in order to show the effectiveness of the agreements. It will obviously be probed in Munich, where a meeting of the Norman Foreign Ministers may take place in February at a security conference.

In any case, the Ukrainian negotiators to the Berlin summit should now be sure not to go precisely with the illusory calculation of an “agreement”, but with a plan of demilitarization: “silence regime” —disarmament and disbandment of illegal armed groups (formally recorded in the plan) — withdrawal of Russian troops here already without formalities, because “theyarenothere”) — control over the border. And no debate about the election.