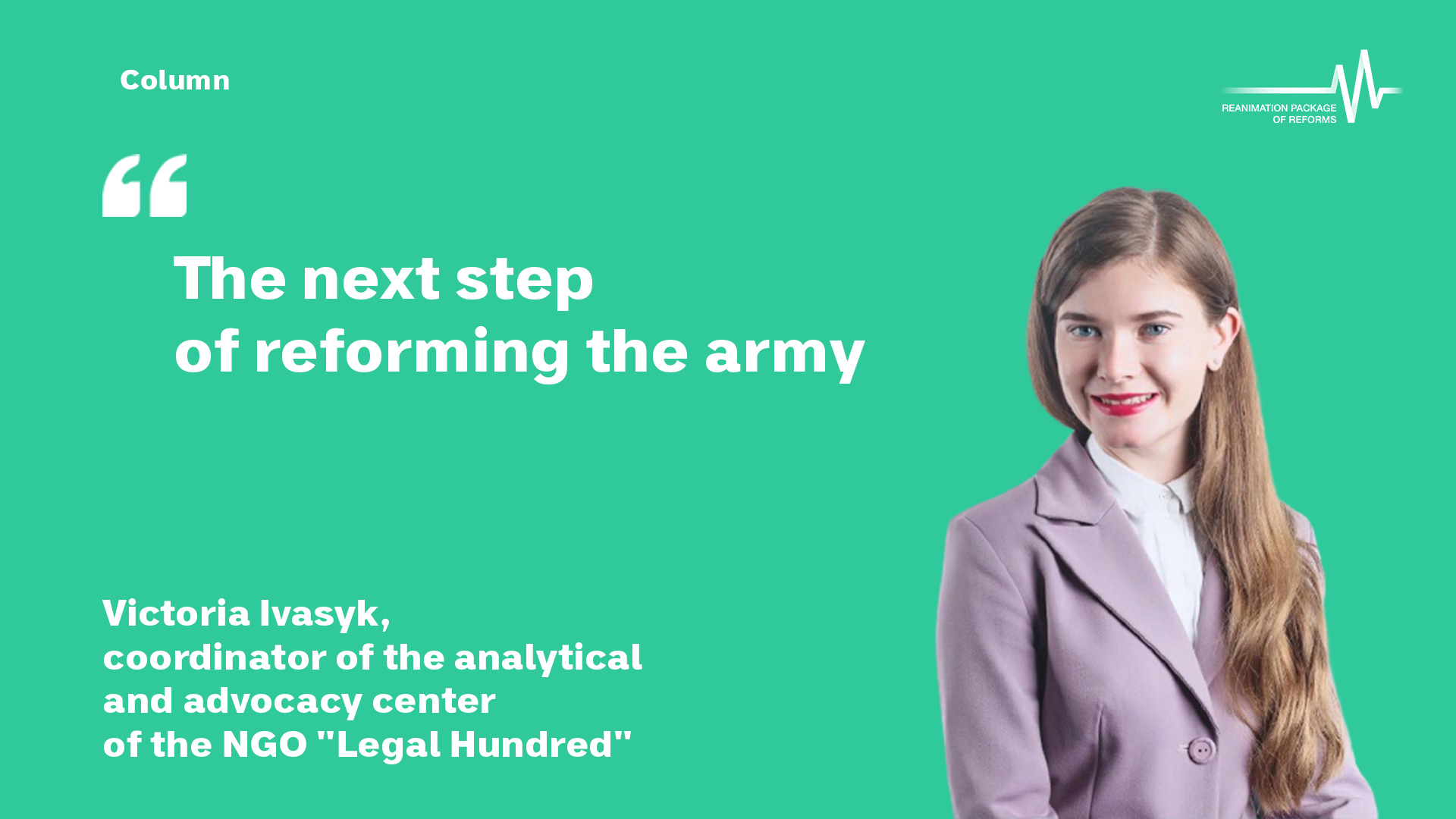 The next step of reforming the army

The success of any institution is based on three pillars: structure, work organization processes, people. This material is dedicated to the most important component – people.

The Law on Military Duty and Military Service stipulates that men and women perform military service on an equal basis. This means that servicemen, regardless of their gender, have equal rights, duties and responsibilities.

However, while proclaiming equality in one rule, military legislation also contains numerous provisions that are openly discriminatory against both women and men.

The documents were developed by the NGO “Legal Hundred” together with the team of MP Marina Bardina, the NGO “Women’s Veterans Movement”, an inter-factional association in the Verkhovna Rada “Equal Opportunities”. The text of the projects was further discussed and finalized together with lawyers of the General Staff of the Armed Forces of Ukraine.

What problems will the adoption of the draft law solve?

The first painful issue is the protection of the rights of a serviceman-father.

The draft law eliminates the restriction that a male serviceman may enjoy social protection in matters of paternity protection only in the case of raising a child without a mother.

Thus, military parents will receive two vacations that are already common for civilian professions – in connection with the birth of a child (up to 14 days) and for child care.

The draft law also removes unclear restrictions on women’s military service. Thus, the Charter of the Internal Service of the Armed Forces of Ukraine allows appointing women only to a limited list of positions.

Interestingly, in 2018 a law that removed this restriction was adopted. However, due to a technical error, in 2019 another law returned the old version of the article on uniforms, leaving restrictions on the appointment of women soldiers.

It is important that the draft law №5713 provides for a mandatory official investigation in the case of allegations of sexual harassment during the service. Under current law, the investigation is appointed at the discretion of the commander, who may be the perpetrator.

The mechanism of the investigation will be defined in more detail in the order of the General Staff, which is being worked on by the Legal Hundred together with the General Staff of the Armed Forces of Ukraine (materials of the proposed mechanism can be found at this link).

Draft law №5714 allows women to be punished in the form of detention in a disciplinary battalion or arrest in a guardhouse for military offenses (except for pregnant women).

Each sanction for a military administrative offense provides for detention on guard duty, and 12 sanctions out of 34 norms that determine the composition of war crimes provide for such a type of punishment as detention in a disciplinary battalion. However, under current law, they do not apply to military women.

What do the military themselves think about change?

In preparing the amendments to the legislation, the Legal Hundred interviewed 92 servicemen and veterans (50 women and 42 men). The poll was conducted through the Legal Hundred hotline. Respondents were selected from all regions of Ukraine, except for the temporarily occupied territories (proportionally residents of regional centers and other settlements of the region).

We asked the respondents whether, in their opinion, it is possible to detain women in a disciplinary battalion and on guard duty.

76.2% of people supported the establishment of equality in the issue of responsibility among servicemen. 19.5% of respondents indicated that such types of penalties cannot be applied to women, as it is too strict for them. 4.3% of respondents found it difficult to answer.

It was a front line with many weapons, so in order to ensure order and security for the woman and other soldiers, the commander decided to bring 2 other servicemen to her so that they could control her. In this way, three servicemen were suspended for 12 hours instead of one ”(Galina, veteran).

We also asked whether it is appropriate to introduce childbirth leave for men.

96.7% of respondents supported this idea.

Respondents’ opinion on restrictions on women soldiers for holding positions in law enforcement agencies:  81.5% of people supported the abolition of restrictions. 18.5%  indicated that the current restrictions should be maintained.

NATO countries have the same approach to accountability for war crimes against women and men.

Most NATO countries, such as Australia, Bulgaria, Bosnia and Herzegovina, Canada, Croatia, Germany, Greece, Hungary, Lithuania, Serbia, Slovakia, Slovenia, Spain and others, provide childcare leave to male servicemen on equal terms with women. in addition, with the possibility of using it in parts of the father and mother in turn.

These countries also have additional gender-specific programs designed to maintain a balance between the professional lives of servicemen and the upbringing of children.

NATO countries do not have any restrictions on women’s access to military positions, moreover, in the military structures of NATO countries, such as Belgium, Bulgaria, Canada, Croatia, France, Germany, USA, Hungary, Italy, Latvia, Lithuania, Luxembourg, Montenegro, the Netherlands, Portugal, Romania, Slovakia, Slovenia, Spain, Northern Macedonia and others,  there are units responsible for gender equality in personnel policy.

On December 6, our state will celebrate the Day of the Armed Forces of Ukraine. In this regard, I have a proposal for MPs who want to congratulate the Ukrainian army – to support the draft laws №5713 and №5714, because equality is always the best gift.

Victoria Ivasyk, coordinator of the analytical and advocacy center of the NGO “Legal Hundred”, for UP.