Reanimation package of reforms > News > Columns > The crime of aggression in international law: why is everything so complicated? 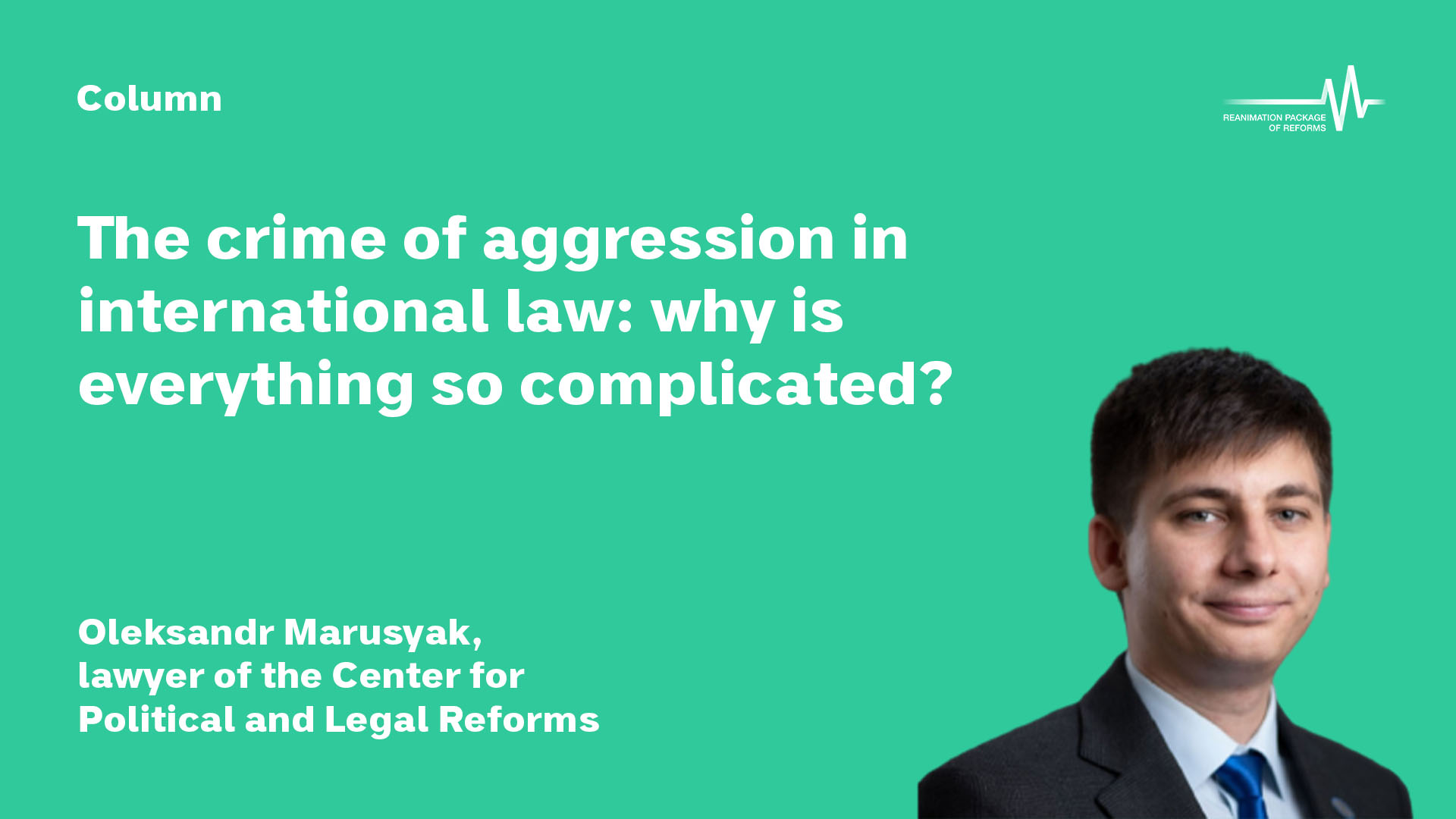 The crime of aggression in international law: why is everything so complicated?

What is wrong with the crime of aggression compared to genocide, war crimes and crimes against humanity?

As I already have wrote everything has always been difficult with the crime of aggression in international law. Even when the Rome Statute of the International Criminal Court (ICC) was written in the late 1990s, many states that planned to be members of the ICC in the future participated in armed conflicts themselves, which says a lot.

Initially, states failed to agree on the definition of this crime in the original version of the Rome Statute of 1998. The Statute stated that the ICC’s jurisdiction extends to serious offenses of concern to the international community, including the crime of aggression (Article 5 (d)), but it was planned that in the future the member states of the ICC will meet again for an international conference, which will decide the fate of this crime.

Such a conference took place in 2010 in Kampala (Uganda), where the States Parties to the Rome Statute introduced the amendments to the definition of the crime of aggression, supplementing the Statute, in particular:

1) Article 8 bis “Crime of Aggression”, which defines this crime as planning, preparing, initiating or committing an act of aggression which, by its nature, seriousness and scale, constitutes a gross violation of the UN Charter, a person under effective leadership or control over political or military actions of the state, as well as “act of aggression” in accordance with the definition of Art. 1 and 3 of the UN General Assembly Resolution “Definition of Aggression” of 1974;

As for the UN General Assembly Resolution 3314 (XXIX) “Definition of Aggression” of 14 December 1974, referred to in Article 8 bis of the Rome Statute, it defines aggression as the use of force by a State against the sovereignty, territorial integrity or political independence of another State. 1) or in any other way incompatible with the UN Charter; and aggressive war is called a crime against international peace. In addition, this resolution establishes an expanded list of acts of aggression compared to the previous Convention on the Determination of Aggression of 1933 (Article 3):

(c) The blockade of the ports or coasts of a State by the armed forces of another State;

(d) An attack by the armed forces of a State on the land, sea or air forces, or marine and air fleets of another State;

(f) The action of a State in allowing its territory, which it has placed at the disposal of another State, to be used by that other State for perpetrating an act of aggression against a third State;

(g) The sending by or on behalf of a State of armed bands, groups, irregulars or mercenaries, which carry out acts of armed force against another State of such gravity as to amount to the acts listed above, or its substantial involvement therein.

Article 4 of the Resolution also stated that aggression is not limited to all the above actions, and the UN Security Council, in accordance with the UN Charter, may classify other actions of states as acts of aggression.

However, the Kampala Amendment also provided for the following reservations:

1) The ICC may exercise jurisdiction only over those crimes of aggression which were committed only 1 year after the ratification or adoption of the 2010 amendment by 30 States Parties in accordance with a decision taken after 1 January 2017 by the same majority of States necessary for the adoption of an amendment to the Statute;

2) The ICC shall not have jurisdiction over crimes of aggression committed by nationals of States not party to the Rome Statute or in their territories;

3) The ICC may not exercise jurisdiction over an act of aggression committed by a State Party if that State has declared non-recognition of such jurisdiction by sending a statement to the ICC Secretary (Article 15 bis (4)).

Thus, in 2010, the states agreed on the crime of aggression, but decided to postpone the activation of the ICC’s jurisdiction over it, and provided that this would apply only to those states that have ratified these amendments separately (i.e. could be a member of the ICC and not fall under its jurisdiction over this corpus delicti).

Thus, it was first necessary to collect 30 ratifications of such amendments, which took several years. Palestine became the thirtieth state to ratify these amendments in 2016, so from January 1, 2017, the ICC member states could already convene and draw a decision.

In December 2017, the Assembly of ICC Member States finally convened and on 14 December 2017 adopted a resolution on activating the ICC’s jurisdiction over the crime of aggression from 17 July 2018 (20th anniversary of the signing of the Rome Statute).

Thus, unlike the crime of genocide, war crimes or crimes against humanity, the ICC jurisdiction over the crime of aggression applies only to those states that hypothetically committed such a crime a year after ratification or adoption of the Rome Statute with the Kampala Amendments, but not earlier than 17 July 2018 year. This means that the ICC is unlikely to be able to punish the Russian leadership for this crime, because Russia has not even ratified the Rome Statute, let alone these amendments. It would be easier to set up a separate tribunal to punish high-ranking Russian officials. However, this does not exclude the possibility of their punishment for genocide, war crimes and crimes against humanity committed on the territory of Ukraine.

Therefore, we need to replenish the evidence base! Glory to the Armed Forces of Ukraine!

Oleksandr Marusyak, lawyer of the Center for Political and Legal Reforms in the sphere of constitutional and international public law, for Liga.Net