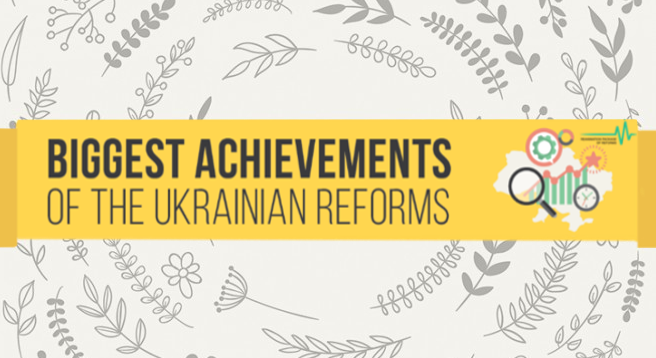 THE BIGGEST ACHIEVEMENTS OF THE UKRAINIAN REFORMS (as of November 2016)

In spite of huge resistance, Ukrainian reforms do produce tangible results and civil society will continue to push for these changes to become irreversible. Listed below are the significant reforms achieved since 2014. 1) In 2014 important legislation was adopted, paving the way for the establishment of three new anticorruption institutions in 2015:

As of September 2016, with over 10 months of activity of NABU and SAP, 208 proceedings have been started (concerning leaders of state-owned enterprises, prosecutors, judges, civil servants of “A” category, and other officials), 100 notes of suspicion have been served, and 25 cases have been assigned. As of August 2016, 45 million UAH (1,65 million EUR) were seized and returned to the State, and 2 individuals were convicted (accepted plea bargain in “MP Onyshchenko gas fraud case”).

2) Progressive legislation on corruption prevention was adopted in 2014, and beginning its implementation in 2016, Ukraine introduced an advanced electronic system for disclosure of assets, income, and expenditures of the public officials and politicians. Between September 1 and October 30, 2016 more than 103,000 top officials declared their assets, among them – the President of Ukraine, members of the Cabinet of Ministers, MPs, judges, and prosecutors. In 2017, all acting public servants and those who resigned in 2016 will have to submit their declarations.

The system received an international award, the Procurement Leader Award, for the development and implementation of an electronic system with a unique architecture. Owing to the ProZorro system, Ukraine was granted the rights to organize the largest international forum on public procurement – Procurement, Integrity, Management, and Openness (PRIMO) Forum on fighting corruption in public procurement that will take place in May-June 2017.

In 2015, the British company Crown Agents procured medicines for the treatment of pediatric and adult cancer, which was on average 45% cheaper than what the Ministry of Healthcare paid in 2014. Total savings for both programs amounted to 19.8 million USD.

5) In 2015-2016, a number of legislative initiatives were adopted and implemented. As a result, access was opened to several governmental databases of social significance (data on public procurement, the state register of legal entities and individual entrepreneurs indicating the final beneficiary, urban planning documentation, etc.). In addition, data on the owners or holders of proprietary rights to movable and immovable property and land plots has become open, searchable by name, and available on the Internet.

These changes contribute to the protection of property rights as well as the exposure of corruption and unjust enrichment of public officials. In addition, Ukraine is one of the first countries to set such high standards of transparency for data of social significance.

6) A single portal on public funds use was created. It presents data on the use of public funds by governmental agencies as well as state-owned and municipal enterprises: http://spending.gov.ua. This resource allows anyone to monitor whether public funds are effectively used.

Since September 2015, all transactions made by the State Treasury of Ukraine through a single state treasury account (other than transactions with security classification and those related to the national defense capability) are published on the portal on a daily basis. As of October 2016, 30 million transactions of the State Treasury have been published on the website. Accounts have been registered for 45% of all administrators and recipients of public funds, while the volume of information has increased up to 88%.

7) Since April 2016, Ukrainian TV channels and radio stations have been publishing information about their beneficiaries and owners. Television and radio have a considerable influence on Ukrainian politics, but it used to be difficult to determinethe real owners of national and local television channels. Although open governmental registers do disclose partial information about media outlets, their presence in the structure of the ownership of offshore entities did not allow citizens to clearly determine exactly whose interests are served by the editorial policy of the TV channels. Now, the data on the ownership structure (including foreign entities), the changes in this structure over the year, and the information about all direct and indirect shareholders of TV channels will be published annually.

8) Apart from the establishment of new anti-corruption institutions, one of the most corrupt services – patrol and inspection service and the State Automobile Inspectorate – is being transformed into the new patrol police as part of the reform of law enforcement agencies. Candidates for this new force are selected through transparent competition, with representatives of the public included in the selection panels. The first 2,000 patrol officers took their oaths in July 2015 in Kyiv. Over the course of the year about 13,000 patrol police officers started to work in three more regions – Lviv, Kyiv, Kharkiv – and in 32 cities (including three near the conflict zone – Kramatorsk, Sloviansk, Mariupol). In addition, patrol police ensures traffic safety along some sections of international roads in Odesa, Rivne, Lviv, Kyiv and Zhytomyr regions.

9) Within the prosecutor’s office reform in part of depriving prosecutors of powers to represent the interests of citizens in courts, 100 free legal aid centers were opened in July 2015. They provide low-income individuals with free legal advice, as well as ensure legal representation of such persons in civil and administrative cases. In September 2016, additional 402 legal aid bureaus were established with the aim to provide same categories of people with legal advice and consultations, but without legal representation. These legal aid centers and bureaus can have an enormous impact on the nearly 8 million potential clients.

10) The legislation required for the decentralization reform was adopted in early 2015. According to the Law of Ukraine “On voluntary amalgamation of territorial communities,” the regional state administrations have developed, and the regional councils have approved, long-term plans of forming capable communities in 23 regions (except for Zakarpattia region).

Moreover, the amalgamated territorial communities have also been granted direct inter-budget relations with the State Budget of Ukraine (direct governmental subsidies for the development of healthcare and education sectors, basic governmental grants). In 2016, 5.9 billion UAH (216,9 million EUR) was allocated to the regional development and support of the amalgamated territorial communities. These funds are distributed among the regions and communities in a transparent and proportional manner.

11) Contracts concluded with the European gas suppliers allowed Ukraine to diversify its supply chains and dramatically reduce consumption of Russian gas. In 2013, the share of Russian gas in the Ukrainian imports reached 92%, in 2014 it decreased to 74%, whereas in 2015 – to 37%. As of October 2016, Ukraine has not imported any natural gas from Russia.

In addition, actions have been taken to eliminate cross subsidies in energy sector through closing the gap between the prices for industrial and domestic consumers. It is planned to completely abandon the administratively regulated prices and move to market prices by April 1, 2017.

12) A number of measures have been taken to promote energy saving in Ukraine. In particular, a governmental program was introduced to ensure reimbursement of a significant share (30-40%) of every loan taken to ensure energy efficiency of private homes and apartment buildings managed by associations of co-owners. As of October 2016, Ukrainians have received over 2 billion UAH (73,5 million EUR) in loans designated for energy modernization. Also, in July 2016 the government of Ukraine approved the concept of an Energy Efficiency Fund to be launched in the first half of 2017. The fund will provide a wide-scale financial support for the population to implement energy efficiency measures.

13) One of the key elements of anti-corruption policies in Ukraine is the governance of state-owned enterprises (SOEs). Since the state is the largest owner of assets in the Ukrainian economy, it has always been tempting for politicians to redistribute public assets and the income they generate in their own interest. As a result, most SOEs have always been loss-making.

In the past two years, Ukraine has managed to substantially reduce the losses of SOEs – from 117 billion UAH (4,3 billion EUR) in 2014 to 16 billion UAH (588 million EUR) in 2015 – through increased transparency and accountability. Two-thirds of the savings are due to the corporate governance reform of the national oil and gas giant, Naftogaz. The government of Ukraine and its vibrant civil society expect that the recent legislative changes in the area of corporate governance of SOEs will bring Ukraine closer to the OECD standards, making the companies more transparent, accountable, and effective.

14) Another major achievement in the economic sector is a significant decrease of the so called “single social contribution” (SSC), which is one of the most complicated (and previously one of the highest) labor taxes in the world and went mostly to feed the obsolete pay-as-you-go pension system. There were 80 different rates for various cases, but normally this tax exceeded 40% of gross salary.

In 2015 the Parliament passed a bill prepared in cooperation with the civil society that has set uniform 22% rate of this tax. Contrary to the skeptical warnings, actual impact of this reform on budget balance appeared to be positive; ​by the end of 2016 ​budget revenues are forecasted to increase by 7.4 billion UAH (272 million EUR). It means that de-shadowing indeed works. But this cut is not enough: the SSC should be further decreased and eventually abolished in the course of the pension reform.

15) The Ukrainian parliament adopted amendments to the Constitution of Ukraine in part of the judicial system, as well as one of the first implementation laws “On the judicial system and the status of judges.”The constitutional amendments received a positive opinion from the Venice Commission; they meet the recommendations of the Council of Europe regarding the independence and accountability of judges, as well as the principles of operation of the prosecutor’s office. The relevant law shapes the conditions for the renewal of the judicial system, including the establishment of a new Supreme Court with a fully updated panel of judges selected through competition. It also sets higher standards of judicial independence and ensures greater transparency and public accountability of judges.

As a result of Constitutional amendments and introduction of a very comprehensive e-declaration system, around 1,000 judges resigned voluntarily, freeing space for the substantial renewal of the judiciary.

High Qualification Commission of Judges announced a competition for the new Supreme Court in November 2016.

16) A number of important steps towards democratization of the political system have been taken. Electronic appeal and electronic petition, tools of public influence on the national and local policy-making, have been introduced. The citizens of Ukraine are able to initiate and endorse petitions on urgent issues to the President with 25,000 signatures, the Kyiv City Council with 10,000 signatures, and other agencies. Moreover, a mandatory roll-call vote of deputies of local councils and publication of voting records have been introduced to strengthen the responsibility of local MPs to their electors.

17) The Ukrainian Army is undergoing modernization, having introduced 68 NATO standards in its Armed Forces. In 2016, 4,000 soldiers were retrained according to these standards.

National security and defense sector expenditures were increased to 5% of GDP. Since January 2016 some defense procurement of the Armed Forces is done via ProZorro system, which allowed the Ministry of Defense to save over 780 million UAH (28,7 million t) so far.

During 2014-2016 period, the number of the Armed Forces in Ukraine doubled and reached 250,000 soldiers. The weaponry was also significantly upgraded in order to restrain Russian invasion.

Although Ukraine still has a long way on its path of reforms, there are already important accomplishments which should be noted. The civil society will continue to use this momentum to achieve the monumental goal of transforming Ukraine from a corrupt post-Soviet state into a developed and democratic nation.