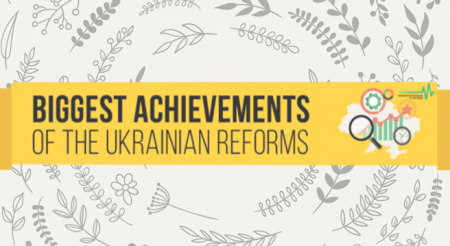 RPR Coalition experts analyzed the course of reforms after the Revolution of Dignity and identified the most important concrete and quantifiable achievements that are already impacting the lives of Ukrainians. In particular, the achievements include the first results of activities of newly established anti-corruption institutions, introduction of an electronic declaration system, aggregates of potential savings from introduction of ProZorro public procurements platform, etc.

“Every day we hear a lot about betrayal and what Ukraine has failed to succeed in, but we can still observe progress and we should keep acknowledging it. Therefore, we decided to analyze what steps forward Ukraine has taken. It is important to inform not only about failures, but also about successes, because this is important both for the positive perception of reforms within the country and for the support of Ukraine by the international community,” said the Head of the Secretariat of Reanimation Package of Reforms, Nataliia Yevchenko.

Such key achievements of Ukrainian reforms as the assignment of drug procurement to international organizations, banking system cleansing, establishment of over seven hundred amalgamated territorial communities, ceasing to import Russian gas, as well as a number of achievements in the economic sphere have been also emphasized in the bulletin.

“In the World Bank’s Doing Business Ranking, Ukraine has moved up from 112th to 76th position in four years. This, of course, is a product of many contributing factors. RPR has identified several important changes in the economic sector. They are related to the deregulation of businesses, decrease in the losses of state-owned enterprises, introduction of electronic administration and VAT refunds,” said Nataliia Yevchenko.

According to the experts, as early as this week, a couple of new achievements might round up the 8th plenary session. The agenda for the upcoming plenary week developed by the public for the parliament, in particular, includes the appointment of a new composition of the Central Election Commission which should consist of professionals and non-discredited members; submission of alternative draft laws on the establishment of a new financial investigations body 8157, 8157-1, 8157-2 for revision to the relevant committee, and consideration of the Draft Law No. 2820 on public health protection against harmful effects of tobacco.